Although westerns, like most forms of cinema, are more generally available than they once were if you know where and how to look, nobody has seen all the westerns that exist.  Even some of the fifty-five great westerns aren’t generally available these days on DVD. The list has been given a great deal of thought, but it’s not cast in stone and is open to the addition of new or overlooked western movies.  Although westerns have been mostly out of cinematic fashion for more than three decades, some filmmakers with an ongoing affection for the genre do continue to make them.  The most recent great western was released in 2010. 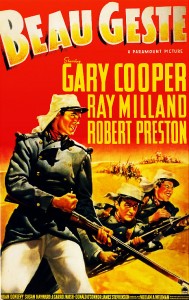 So if you like western movies already or are just curious about them and where to start, look things over.  Chances are that no matter how well you know westerns, you can find one or two additional gems you’ll come to appreciate.  It’s a uniquely American genre of film (although related to both samurai films, private eye-films noir, many science fiction films and others), but westerns can be either simple or thematically complex.  People far beyond America’s shores love these stories and films, too.  So if you’re looking for battles, stories about man against nature, Native Americans, revenge, the search for family, the extravagant beauty of the American west, courage, honor—you can find something here you didn’t know about.  Or maybe enjoy again something you already did.

• It is a truth universally acknowledged (well, mostly) that 1939 was the greatest year in the golden age of the Hollywood studios.  Movies released that year included such gems as Gone With the Wind, The Wizard of Oz, Gunga Din, Mr. Smith Goes to Washington, Ninotchka, Dark Victory, Goodbye Mr. Chips, Wuthering Heights, Beau Geste, Only Angels Have Wings, Young Mr. Lincoln, The Roaring Twenties, and, of course, Stagecoach.  The list is amazing.
• While there were many great movies of all sorts made earlier during the decade of the 1930s and the even earlier period of silent movies, that is not as true of westerns.  There had been an ambitious western released in 1930 that might have revolutionized the genre and introduced a major new star: director Raoul Walsh’s The Big Trail, with handsome and inexperienced young John Wayne.  But it was not a success at the box office, and both the genre and Wayne had to wait for most of a decade for their cinematic breakthrough.  This was true despite the fact that 1931’s winner of the Oscar for the best movie of the year was a western—the only western best picture winner until the 1990s. And it was an epic in scale.  It was Cimarron, based on the Edna Ferber novel and starring Richard Dix.and Irene Dunne, albeit with an uncredited director (Wesley Ruggles).  But it is not much watched these days, unlike, say, Stagecoach. 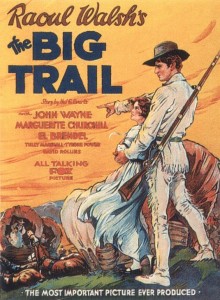 • What was so revolutionary about Stagecoach, then?  It was a departure in a number of ways.  Cinematically, it made striking use of western settings not seen much before (Monument Valley in the Four Corners area on the Utah-Arizona border, which became one of director John Ford’s trademarks).  It had a strong story.  It made use of small historical connections with the west (the names Luke Plummer and Ringo Kid, for example, and the aces and eights hand of playing cards).  It featured the work of both the greatest director of westerns (John Ford) and the most enduring western movie star (John Wayne) the movies have yet seen.  Notwithstanding Wayne’s considerable presence, it was a well-cast ensemble movie that worked extremely well. It even featured ground-breaking stunt work by Yakima Canutt, one of the greatest and perhaps the best-known Hollywood stunt men ever.  It was not only the best western of 1939; it was one of the greatest movies ever made.  Unlike The Big Trail, it also made a star of John Wayne. 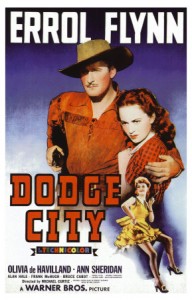 • Even leaving aside Stagecoach, this list would probably start in 1939 anyway.  There were several near-great westerns that year that indicated a new, more serious and larger budgetary approach to the making of westerns.  Many of them are still watched, too:  Dodge City (with Errol Flynn), Destry Rides Again (James Stewart in his only western before the 1950s), Jesse James (Tyrone Power and Henry Fonda), and Union Pacific (Joel McCrea, Barbara Stanwyck and Robert Preston).  All this revitalized the genre and made it more significant cinematically.  By the late 1940s, such stars as Randolph Scott and Joel McCrea were devoting their careers almost entirely to the making of westerns.  By 1950, Scott was the biggest male box office star in Hollywood.  There are those who would say that before 1939, the biggest stars were women, but after the social and cinematic changes brought about by World War II, men had become bigger stars.  And westerns had come into their own as a genre.