Great westerns don’t get released every day, or even every year.  These days, when the genre is largely out of fashion, it’s notable when a western this good appears.  The basic story deals with Dan Evans (Christian Bale), an Arizona rancher in dire financial difficulty who agrees to help take notorious outlaw leader Ben Wade (Russell Crowe) to the town of Contention, where he’ll be placed on a train to the territorial prison in Yuma.  It’s dangerous, primarily because the outlaw’s gang is certain to try to rescue him, but there are other less predictable dangers as well.  Along the way, the civilized rancher and the ruthless outlaw develop a certain ambivalent relationship, which really forms the heart of the movie.  It’s forged of honor and responsibility pitted against conscienceless pragmatism, and they’re not entirely hostile. 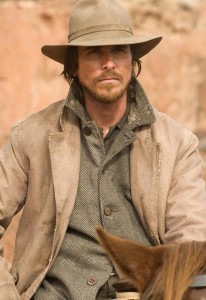 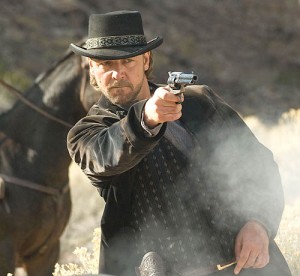 Getting to Contention is not easy, what with hostile Apaches, nasty railroad men, bickering among the members of the party and the constant possibility of Wade’s gang overtaking them.  Once in Contention, the job is far from over.  In fact, in Contention there are even bigger obstacles to getting Wade on the train at 3:10.  Meanwhile, Evans’ teenaged son, who has seen his father battle ineffectually against the elements, lack of water, the bank and hostile marauders on his ranch, begins to re-define his own relationship with his father.

This is an instance where a remake is better than the original, released 50 years earlier.  This remake obviously has a higher budget.  While it has the same strong core story as the original (both based on a story by the great Elmore Leonard), what elevates this version are the performances of the two leads, Bale and Crowe, along with Ben Foster as Wade’s psychotic lieutenant Charlie Prince.  Bale, in particular, makes the rancher more understandable and less distant than he might have been.  On the whole, Crowe plays the bandit leader as more believably amoral, and occasionally more lethal, than Glenn Ford did in the original.  Crowe is very persuasive when his eyes turn cold.  The rancher’s wife character, played here by Gretchen Mol, may not be as interesting as the same character in the original.  There are stronger sub-themes in this remake, though, producing a richer movie.  Alan Tudyk is good as the local doctor, a civilized character who is actually admirable, unlike most of the other law-abiding types in the movie. Dallas Roberts as Grayson Butterfield, stagecoach line businessman, is very persuasive, as is Logan Lermon as Evans’ headstrong older son William.  In a small role as Emma Nelson, a bargirl who takes Wade’s fancy for a brief interlude, Vinessa Shaw does well, too.  There’s a lot of bittersweet on both sides in that interlude.

There are other differences from the original:  The entire extended sequence between leaving the ranch and arriving in the town of Contention is new.  The role of the older son is much enlarged, not always with complete believability, but it does add a deeper layer of father-son relationship issues to the story.  The Peter Fonda role as Byron McElroy, an unsympathetic Pinkerton bounty hunter, is new, as are other supporting characters.  The outlaws, including their charismatic leader, seem more ruthless than in the original, notwithstanding a couple of touches intended to soften the Ben Wade character slightly.  Following cinematic fashions, the violence in the remake is more graphic than in the original, and in full color.  Most of the supposedly good guys aren’t very admirable, but the contrast helps to make the main point with the Bale character:  the real nature of heroism is that it’s rarer, more admirable and also more mundane than you’d think.  The ending seems stronger (certainly more violent) in the remake, although some have suggested that they don’t find it entirely believable.  In retrospect, the violence seems over the top, but Ben Foster as Charlie Prince is surprisingly compelling in the middle of it all. 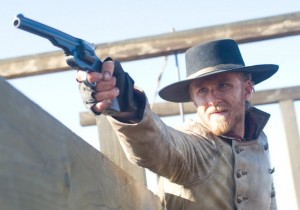 Ben Foster punches it up as Wade’s lieutenant Charley Prince.

For western devotees, this is very worth watching, but it earns its R rating with some rough language and especially with the violence, including the extended shootout at the end.