This originally aired as a two-night miniseries on television; its playing time on DVD is just over three hours.  But television or not, its top-of-the-line casting, a strong story, good direction and excellent production values qualify it for this list.  It won an Emmy for Best Miniseries. 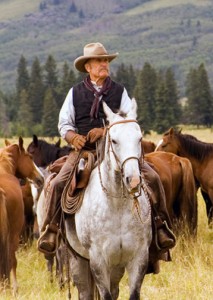 Broken Trail takes place in 1898 and follows Print Ritter (Robert Duvall) and his nephew Tom Harte (Thomas Haden Church) as they drive a herd of 500 horses from the John Day country of Oregon eastward across the mountains of Idaho to Sheridan in north-central Wyoming.  That’s where the British are paying top dollar for horses because of the Boer War.  Along the way, they have a number of unexpected adventures, such as rescuing a wagon-load of non-English-speaking Chinese women destined for prostitution.  They deal with problems provided by nature and by various miscreants, loathsome outlaws, prostitutes, vile madams and a lawless mining town.

But the story and characters are what keep us watching.  Duvall has always been supremely watchable in a western role if the writing’s any good at all.  However, he and the film benefit hugely when he’s got another strong performer to play off; think of Tommy Lee Jones in Lonesome Dove and Kevin Costner in Open Range.   Duvall has said that he thinks of these two movies along with Broken Trail as his trail boss trilogy, and they’re all good. 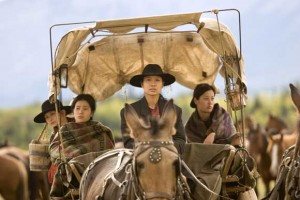 In this case it’s Church’s performance, and his relationship with Duvall’s character, that make this movie excellent.  In some ways his character is harder, more humorless and more unyielding than Duvall’s, but in the end he can change more than Duvall can.  There’s a certain amount of heartbreak in this one, as well as all the action one could wish.  There are a number of historical touches that make this richer than it had to be.  It takes the time to develop not only the relationship between uncle and nephew but to differentiate the Chinese women as individuals.  It’s longer than most movies and the pace isn’t quick, but it seldom seems to drag.

This is obviously the story of a stock drive, horses in this case–or as Print Ritter calls them, “high-desert mustangs.”  As with many westerns, however, the subtext is the search for family on a number of levels:  the healing of long-time family relationships; the bonding of strangers; the formation of new romantic relationships and the relationships that don’t quite get formed—all while using traditional western themes, situations and settings. 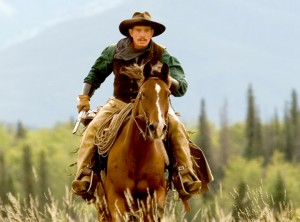 Lonesome Dove was clearly a strong influence on this film, and this is not quite on the same level as that masterpiece.  The three-hour playing time makes the pace seem leisurely at times, especially in the second half.  The editing is looser than it could be, and not all of the many threads of the story seem to be entirely consistent or tied up by the end of the film.  There are a couple of spots where it seems like what was captured on camera could be clearer, as when the horses crest the Whale’s Back and start down the other side.  The ending seems extended beyond what we expect, but that extension has a certain power to it as we learn what became of these characters after the events of the movie.  Although they are fictional, they do seem real after this recounting.  The device is fairly common, but it is exceptionally well done in this case.  In the words of Print Ritter, “We’re all travelers in this world.  Sweet grass to the packin’ house, birth to death, we travel between the eternities….”  People make their choices, and human ties remain what the individuals have made of them. 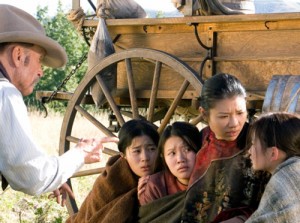 Ritter and the Chinese girls

The Chinese women are all sympathetic and well-played, especially Gwendoline Yeo as Sun Foo (No. 3, the oldest).  Greta Scacchi is Nola Johns, an older prostitute who flees Cariboo City with Harte and the Chinese women, and she’s very good.  Scacchi is a very beautiful English-Italian actress of a certain age, deliberately made up here to indicate the hard use to which her character has been subjected.  She shows quiet warmth as her relationships develop with other characters, along with strength in disappointment, and, in the end with just her voice, controlled heartbreak.  Other smaller roles are excellently played:  Rusty Schwimmer as the vicious madam Big Rump Kate Becker; Chris Mulkey as ruthless bad guy Big Ears Ed Bywater; Scott Cooper as Heck Gilpin, fiddler and apprentice horse wrangler; and James Russo as Captain Billy Fender, loquacious white slaver.  The bad guys are pretty thoroughly evil, no question about it. 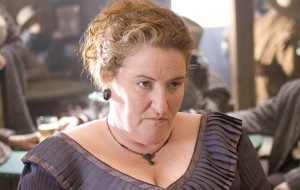 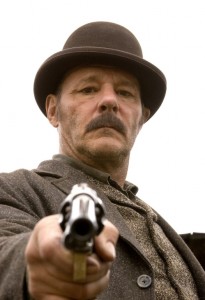 The production design is excellent, overseen by Ken Rempel.  The production team obviously spent time doing their research and making this look and sound authentic for its period.  Except for Cariboo City, a rowdy Idaho mining camp (which was in fact largely abandoned by 1898), this movie doesn’t spend much time in towns, so look at what the characters are wearing and the equipment they use:  The curve of the brim on Church’s hat, for example, and the leather cuffs these working cattlemen wear to protect their arms from rope burns.  (Now we need to see a cowboy on these northern ranges wearing a pair of woolly chaps.)  The use of the term “buckaroo” was in fact common especially around the Great Basin and points north where this takes place, although not so much in more southern ranching areas.  The description by Nola Johns of the downward career path of a western prostitute is quite accurate.

There’s been a trend in recent years to use the Canadian Rockies in Alberta for filming westerns, and Broken Trail benefits from this gorgeous scenery, with Lloyd Ahern as the cinematographer.  The horses crossing a river or just breathing on a frosty morning, keeping the herd moving through an early snowfall–it always looks great, even if you’ve never seen these things before.  On occasion it may not look much like the high deserts of eastern Oregon and southern Idaho, however.  Since it wasn’t released in theaters, it wasn’t subject to the cinematic rating system.  It would have been on the borders of PG-13 and R, because of the violence, occasional language (although they’re careful), and themes involving prostitution, ruthless behavior, and death.  Director Walter Hill (see The Long Riders, as well as the underrated Geronimo:  An American Legend) clearly feels an affinity for the era and is one of the three or four best directors now working in the genre, although he doesn’t actually make a lot of westerns.

If you’re interested in another good western featuring the Chinese in the American west, see A Thousand Pieces of Gold.  Scott Cooper, playing a supporting character here (Heck Gilpin), went to to become a pretty competent director of westerns himself.  (See Hostiles, 2017, an excellent cavalry movie). 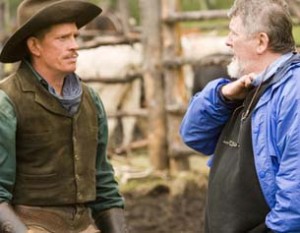