There have been a lot of movies made about Wyatt Earp and the famous gunfight at the OK Corral.  Kurt Russell is a superb cinematic Wyatt Earp, in part because physically he looks so much like a well-known photograph of the lawman, down to the moustache, the hair and the blue eyes.  But he’s also an excellent and sometimes under-appreciated actor.  Of course, the really meaty role in any retelling of the Wyatt Earp story is that of tubercular gambler-dentist-gunfighter Doc Holliday, wonderfully played in this case by Val Kilmer. 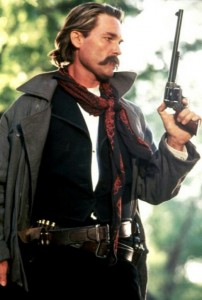 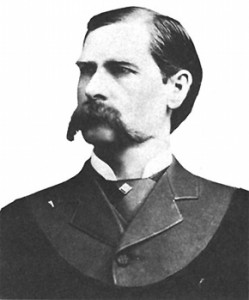 Earps cinematic and historical:  Kurt Russell as Wyatt Earp, and the real Wyatt.

The story is so well known that there are always questions about the historical accuracy of a movie telling it yet again.  This is one of the more accurate, along with Lawrence Kasdan’s Wyatt Earp, which was made about the same time and which is much less enjoyable.  Some events are telescoped close together in time, when they actually happened months apart, and there’s frequently a very theatrical signaling of impending events.  The supporting roles here are very strong, including, in addition to Kilmer’s Holliday, Powers Boothe as Curly Bill Brocius, Stephen Lang as Ike Clanton, Michael Biehn as a psychotic Johnny Ringo, and Jon Tenney as the slippery Cochise County sheriff John Behan.  Sam Elliot’s presence as older brother Virgil Earp is good, too, and Bill Paxton has a quieter role as younger brother Morgan.  Dana Delany as Wyatt’s romantic interest, the actress Josephine Marcus, is not as strong as one might wish to match with Earp, but even this bit of casting works.  One does appreciate the fleeting staging of the famous supposed Marcus photograph, even if throwing it into the middle of the gunfight seems kind of gratuitous.  Charlton Heston has a cameo as rancher Henry Hooker.  Tombstone town marshal Fred White here is played by aging western movie veteran Harry Carey, Jr., despite the fact that the real Fred White was only 31 years old.

There are a lot of characters here, and they’re handled well.  Some movie retellings of the Earp story culminate in the famous gunfight at the OK Corral.  It’s a high point here, with an unforgettable image of the Earps and Holliday striding toward the confrontation in their long black coats.  As cinematic renditions of the legendary gunfight go, this is more accurate than most.  But the gunfight is just the start of a series of strike and counter-strike moves, leading to Wyatt’s months-long vendetta ride against the Cowboys gang.  There are a lot of small historical touches that are accurate if you know to look for them.  For example, the use of then-current vernacular, as Doc Holliday responds to challenges with “I’m your huckleberry” and “You’re a daisy if you do.”  And Wyatt pushes Johnny Tyler (Billy Bob Thornton) with “No need to go heeled to get the bulge on a tub like you” and “Go ahead, skin it!  Skin that smoke wagon and see what happens!” 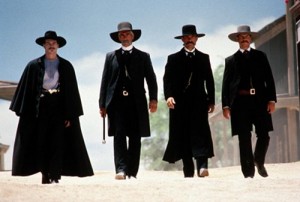 This was Cosmatos’ only western, and he made the most of it, although there was a certain amount of directorial coming and going on this movie and it’s not entirely clear that all the credit goes to him.  According to some (including Val Kilmer), Kurt Russell took over not too far in and finished the shooting.  Russell himself commented in a 2006 interview, “I backed the [original] director; the director got fired, so we brought in a guy to be a ghost director [Cosmatos].  They wanted me to take over the movie.  I said, ‘I’ll do it, but I don’t want to put my name on it.  I don’t want to be the guy.'”  If that’s true, Russell should do more directing.  Cosmatos is rumored to have said, “I do slick American movies with a European sensitivity,” and that describes Tombstone.  There’s a florid theatrical sensibility at work here, but it doesn’t get in the way.  Cosmatos supposedly claimed that all the lightning and moustaches in the movie are real.

The battles and gunfights are well-staged, especially the famous OK Corral fight (surprisingly accurate historically), the battle at the river with Brocius and the other Cowboys (also quite accurate) and the final showdown between Holliday and Ringo (could have happened, but this version is made up because nobody knows what actually took place when Ringo died).  There’s so much going on in this movie, with lots of excellent supporting performances, that it has a lot of re-watchability.  One has the sense that there are a lot of small things (e.g., the part of Billy Breckinridge, played by Jason Priestley) that remain underdeveloped to limit the playing time of the movie.

In addition to the good casting and excellent acting, the music is by Bruce Broughton (Silverado).  And the narration is in the recognizable tones of Robert Mitchum’s voice.

According to Hall Herring in Field & Stream (May 2012), this is the definitive retelling (among many by now) of the Earp saga.  “The story is ancient:  strong newcomers run up against entrenched economic interests that are a part of the legal and extra-legal power structure of the new place.  The enforcers of the entrenched order resist the newcomers.  Violence results.  The arc of the story in Tombstone follows that model almost perfectly.  But any American watching this movie brings to it a wealth of assumptions, and knowledge about mythical figures like the Earps, Holliday, or to a lesser extent, the adversaries like Ike Clanton and Curly Bill [Brocius].  The power of Tombstone is that it does not challenge, ever, what we think we know….  By the time the fight actually comes, we know everybody so well that we are utterly invested in the outcome–every shot, every misstep, is of grave concern.  Tombstone is actually not too far from accurate in a historical sense.  But if it were not, the movie is so powerful that we wouldn’t care one whit what the real history was.”

The film is rated R for violence, of which there is a fair amount.  The body count during Wyatt’s Vendetta Ride is much higher than it was in real life.  For a ranking and comparison of various movies about the Earps (of which there are five good ones), see below.  The other Earp movies that made the list of great westerns here are John Ford’s My Darling Clementine from 50 years earlier and John Sturges’ Hour of the Gun from the 1960s.  At least two others (Kasdan’s Wyatt Earp and John Sturges’ first Earp movie, Gunfight at the OK Corral) are very worth watching.

For more on the making of the movie, see The Making of Tombstone:  Behind the Scenes of a Classic Modern Western, by John Farkis (2018).