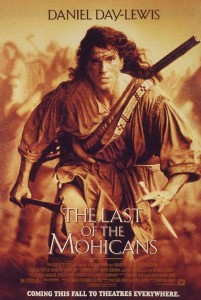 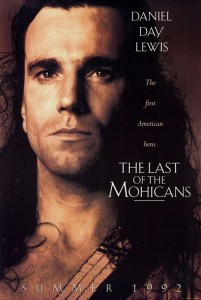 Strictly speaking, this is not a western, since it is set in upstate New York during the French and Indian War of the 1750s.  But it’s a frontier story involving Indians, guns and battles for survival, and it has the great themes of personal independence, self-sufficiency and understanding nature that frequently come with westerns.

It’s a visually beautiful movie that was actually filmed in North Carolina, since New York apparently no longer has the kinds of green spaces, old-growth forests and untrammeled vistas this movie required.  The story for this movie perhaps owes more to the 1936 film starring Randolph Scott than to the original novel by James Fenimore Cooper, which is the original source material for both film versions of the story.  The movie’s central event is based on an actual historical incident (the treacherous slaughter by the French and their Indian allies of English forces after the English surrender of Fort William Henry), but most of its central characters are fictional.  Fictional or not, however, Hawkeye (here given the name Nathaniel Poe), with one foot in the world of whites and the other among the Indians, is one of the most enduring and fascinating characters from American fiction and movies. 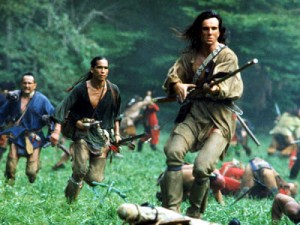 Daniel Day-Lewis is one of the most acclaimed actors of his time.  He’s very intense, and there are people who enjoy him in this role but find him hard to watch in other movies.  This is probably the best movie featuring the beautiful Madeleine Stowe, cast here in the role of older sister Cora Munro.  And the supporting roles are among the very best ever played by Indian actors (Wes Studi, Russell Means, Eric Schweig), along with Chief Dan George’s performance in The Outlaw Josey Wales and Graham Greene in Dances With Wolves.  Russell Means, in particular, is well-managed, because he isn’t really much of an actor but is effective here.  Wes Studi’s evil villainy as Magua is truly impressive.  Stephen Waddington is appropriately loathsome and officious as Major Duncan Heyward, until his final redemption is accomplished through an act of self-sacrifice.

The battle scenes are excellent, showing very clearly how traditional British military tactics didn’t work at all against Indian-style guerilla fighting.  It’s very hard to stage and film the flow of individual incidents among the confusion of a more general battle, and in this movie that’s done very well.  In all other versions of this story, Col. Munro is saved by Hawkeye and survives the massacre, but in this one he is killed.  The movie is rated R because of these battle scenes (and other violence), and they are harrowing. 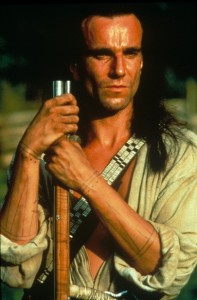 There are some pacing problems with the last part of the movie, as Hawkeye, Chingachgook and Uncas relentlessly pursue the Hurons who have taken Heyward and the Munro sisters captive.  One can’t tell how long the pursuit is, but presumes it would actually be days or weeks, at least, since the slaughter took place in upstate New York but the Hurons were based to the north in Canada.  In this movie, it might be days or weeks, or it might be an afternoon.

The theatrical release of the movie felt like the story, especially the last part, would benefit by a longer cut.  Mann’s original cut was three hours long, but Fox insisted that it be cut to two for its theatrical release.  Jodhi May, playing younger sister Alice Munro, has said that much of her role disappeared in the cutting room.  In the DVD age, however, a director’s cut has been released, and it’s not any more intelligible or flowing (or even much longer) than the original.  Still good to watch, though, and it’s the only version available on DVD in the U.S. as of this writing.  One would like to see the three-hour version some time, although longer is not always better.  And many prefer the original theatrical release to the DVD director’s cut. 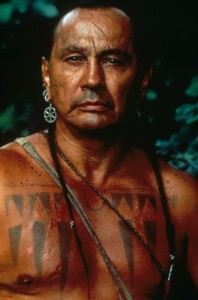 This movie is unusual for a director known best for modern urban crime dramas.  The movie has excellent music as well, with a celtic-influenced soundtrack by Trevor Jones and Randy Edelman.  The fiddler is the famous (if uncredited here) Scot, Alasdair Fraser.

The first cinematic version of this story was made in 1911.  For a bit of perspective after you’ve watched this one, check out the 1936 version with Randolph Scott and, as a cultural curiosity, the 1920 silent version, featuring Wallace Beery as a leering Magua, a noble Uncas as the central figure and a strangely hayseed version of Hawkeye.