A bleak and unyielding western, one of the two westerns that won the Best Picture Oscar in the early 1990s—a period not otherwise noted for its production of westerns.  It’s a great western, but it’s not where you’d start if you weren’t already familiar with this genre. 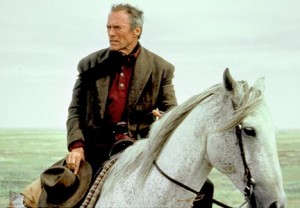 This is the movie that established Clint Eastwood as one of the premier directors of his time, and not just of westerns.  Eastwood is said to have approached a script that had been kicking around Hollywood for 20 years, with the intention of making the last western.  It obviously wasn’t the last in a literal sense, but it feels like it has a note of grim finality.  And Eastwood himself hasn’t made or appeared in another western since. 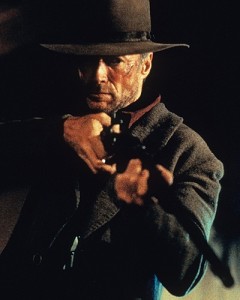 Eastwood’s performance as reformed, then unreformed, gunman William Munny is the linchpin of the film, but Morgan Freeman and Gene Hackman are superb as well.  Hackman won a Best Supporting Actor Oscar for his role as sadistic sheriff Little Bill Daggett.

Farmer, widower, family man and former gunman William Munny is “a known thief and murderer, a man of notoriously vicious and intemperate disposition,” although you wouldn’t know it to see him initially in his role as a pig farmer.  He is reluctantly brought out of retirement by a young man who calls himself the Schofield Kid (Jaimz Woolvett) to collect the bounty a group of prostitutes have put on some cowboys who cut up the face of one of them in Big Whiskey, Wyoming.  Over the course of the movie Munny reverts more and more to his previously cold-blooded self, especially when his long-time sidekick Ned Logan (elegantly played by Morgan Freeman) is killed by the vicious Little Bill.  Ultimately, for Munny there is no going back to pig farming this time.  It’s a fascinating journey as the characters make their choices and play them out, their free will pitted against an increasing sense of grim inevitability.  The most moral character is probably Freeman’s, and he ends up dead.  For least admirable character, it’s kind of a toss-up between Eastwood and Hackman, and the winner is the one who’ll be the most ruthless.  It’s powerful stuff.  William Munny recognizes what he’s doing, but is relentless in doing it anyway.  “Hell of a thing, killing a man. You take away all he’s got and all he’s ever gonna have.”

There’s running commentary by Little Bill himself, as he kind of adopts nebbish scribe W.W. Beauchamp (Saul Rubinek) to explain his tactics and motivation in trying to maintain some kind of order in the violent town of Big Whiskey, while the bounty attracts all kinds of undesirables.  Among them is bounty hunter English Bob (Richard Harris), of whom Little Bill makes short work.  Beauchamp has come west in search of western stereotypes he thinks he knows, only to find that the real thing is a lot more daunting and dangerous.  Munny becomes more hard-bitten and even less verbal as the movie goes on, although he doesn’t seem to mind explaining himself to the writer, either, so far as there is an explanation other than “I’ve always been lucky when it comes to killin’ people.”  Finally, there’s a futility about it.  From the dying Little Bill:  “See you in hell, William Munny.”  “Yeah.” 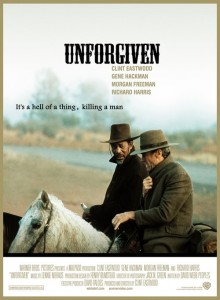 For a movie whose subject is killing, with the cost of killing to both those killed and those doing the killing, this movie nevertheless carries quite a kick without anywhere near the body count of less gritty fare like Young Guns or, obviously, such classics as The Long Riders and The Wild Bunch.  For those who think of westerns as all action, beautiful horses, impressive landscapes, quick justice and the adventure of blazing guns with no introspection, this is kind of an antidote.  From Hal Herring:  “These are collisions set in motion on a grand scale that remain extremely human and comprehensible.  There has never been a set of characters so believable, yet so extreme, and, even with all of the cruelty, so likable.  You never know, exactly, who to root for.”

This is unsurprisingly rated R for violence and language.  It seems impossible to make a western with modern cinematic standards for gunfights without having an R rating, and this one is particularly grim.  This may not be a movie that one will love, but one has to see it if one loves westerns.  For the second time in three years (and only the third time ever), the Oscar for Best Picture went to a western when Unforgiven won it, and Eastwood won for Best Director.  With his respect for tradition, Eastwood dedicated the movie simply “To Don and Sergio”–his film-making mentors, Sergio Leone and Don Siegel (director of his Dirty Harry movies and Two Mules for Sister Sara).

This is the most recently-made of five westerns on the AFI’s list of the 100 greatest American movies, where it appears along with High Noon, The Searchers, Butch Cassidy and the Sundance Kid and The Wild Bunch.  (There are six if you count Treasure of the Sierra Madre.  http://www.afi.com/100years/movies10.aspx)

Note:  Don’t confuse this one with the overblown, John Huston-directed The Unforgiven from 1960, with Burt Lancaster, Audrey Hepburn (as an adopted Kiowa sister) and Audie Murphy.