This is the other western Best Picture Oscar winner from the early 1990s, one of the seven Academy Awards it won.  It also won a Best Director Oscar for star and director Kevin Costner.  It was a breath of fresh air when released, but over time it hasn’t worn as well as some others.  Unforgiven, for example, is as hard and bracing now as when it was released.  But perhaps Dances With Wolves depended for its initial effect on ideas new at the time, which are no longer quite so new. 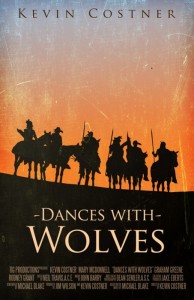 The principal character is Lt. John Dunbar (Kevin Costner), a badly-wounded Civil War hero sent to be the sole occupant of a frontier outpost on the plains.  He fixes up the modest post and tries to learn about the country and its native inhabitants—a band of Lakota Sioux and a wolf who finds Dunbar intriguing.  Gingerly getting to know them bit by bit, he gradually becomes one of them in his way, even forming a relationship with a white woman (Mary McDonnell) who was captured by the Indians so long ago she barely speaks any English.  The Indians go from being inscrutable and savage “others” to being real characters with different personalities as Dunbar gets to know them.

This idyllic existence is only sullied by the eventual return of other soldiers to the post.  Unlike Dunbar, these other whites are completely nasty and unsympathetic, and Dunbar sides with the Sioux against them.

There are excellent performances in this film, including Costner’s, McDonnell’s and especially Graham Greene as Kicking Bird, leader of the Sioux.  Rodney A. Grant is good as Wind in His Hair;  Mary McDonell has one of her best roles ever as Stands with a Fist.  Costner basically has to carry the film, and he does a good job.  The Indians speak Sioux (with English subtitles) to give the movie more realism.  And they look like Indians, because most of them are.  Greene is an Oneida from Canada, and Rodney A. Grant is an Omaha.  These Indians are on screen a great deal and are treated with a strongly romantic sympathy, a new approach at the time.

Commercially, this movie was a gamble at the time of its release, because of its genre, the way it treated Indians, its healthy $18 million budget and its unusual length.  It went on to make $400 million at the box office, a very respectable figure.  In its initial theatrical release, it was three hours long—unheard of in 1990.  Since its release, varying extended cuts of the film have been released on video and DVD, some as long as four hours. 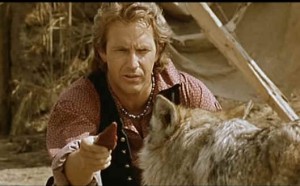 Invitation to the Dance

Lurking in the background throughout the movie is our knowledge of how things are going to work out long-term.  The ultimate outcome can’t be good for the Indians, no matter how much we come to like these individual Lakotas.  Roger Ebert quite accurately characterized this film as a fantasy.  In his review he wrote, “In a sense, ‘Dances With Wolves’ is a sentimental fantasy, a ‘what if’ movie that imagines a world in which whites were genuinely interested in learning about a Native American culture that lived more closely in harmony with the natural world than any other before or since. But our knowledge of how things turned out – of how the Indians were driven from their lands by genocide and theft – casts a sad shadow over everything.”  Excellently made and eminently watchable, but with a whiff of the counter-historical about it.  For Kicking Bird and John Dunbar, we could wish history had worked out as the film depicts, even if it is romanticized.

According to Hal Herring in Field & Stream (May 2012), “…Beyond all the morality tales told, the psychology illuminated, the power struggles and genocidal impulses revealed, what Dances with Wolves is, at its essence, is a magnificent adventure story, richer than Shackleton’s Endurance, of much more historical power than any of the narratives or dramatizations of, say the journals of Lewis and Clark.  It’s a grand tale of the individual transcending the collective culture.  The overall nations–the Lakota and the European-Americans–are hopelessly, mortally, at odds.  But within that death struggle, individuals can become friends and hunting partners.  We all know how the story ends, both the movie, and the real history of the Plains Indians.  That knowledge makes the movie, with all its exuberance and adventure, also unbearably sad.” 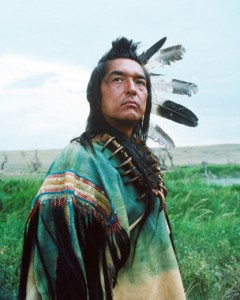 Beautifully shot on location in South Dakota, the film remains very watchable after almost a quarter of a century.  The Best Cinematography Oscar for Dean Semler was more than justified.  It is not without a few minor historical faults.  From Herring:  “Buffalo were not slain by lances that are thrown–the lance is thrust, from horseback.  Dunbar’s woman, Stands-with-a-Fist, must be the only white woman for a thousand miles, and yet he stumbles upon her, and love ensues.  Everybody’s hair is bit too clean, and too fly-away late 80’s style.”

Looking at it in retrospect, it has two problems as cinematic storytelling:  First, the slow pacing sometimes seems indulgent, especially since that’s the director on which the camera focuses almost all the time.  It’s slow in getting off the ground and on to its real subject, and it is admittedly a pretty long and sometimes leisurely movie.  And secondly, all the Indians are so good, and all the whites other than Dunbar so unrelievedly bad, that it detracts from the overall balance and believability of the story and smacks of political correctness.  In a movie this long, couldn’t there have been one more decent white character, and perhaps just a little more (accurate) Indian savagery?  Still, it did start a new era of western movies, and it was the first large-scale movie to succeed in portraying Indians this sympathetically since A Man Called Horse and its sequels in the early 1970s.  And for more than 20 years, until the Coen brothers’ remake of True Grit, it was the highest-grossing western in film history.