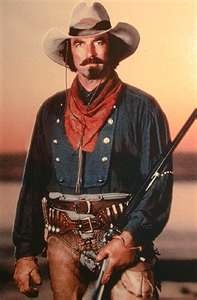 As the title suggests, this is not an American western, since it takes place in Australia.  However, the Quigley of the title is an American cowboy from Wyoming, and the action takes place on the frontiers of western Australia.  The director, Simon Wincer, is also Australian, but he has directed several westerns, including Lonesome Dove.

Matthew Quigley is played by Tom Selleck, who, as usual, seems very at home in a western—even an Australian western.  Quigley has been brought to Australia from Wyoming because he responded to an advertisement for a marksman; his expertise is with a specially fitted-out Sharps long-range rifle with custom ammunition.  His new employer is Elliot Marston (superbly played by Alan Rickman), the owner of a large ranch in the Australian outback.  When the task for which he has been hired is finally revealed, Quigley refuses to go along with it and his expression of that refusal triggers a war between himself and Marston.  The advantages seem to all be on Marston’s side, including the regional British constabulary, such as it is. 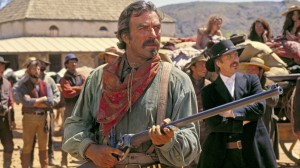 A demonstration of shooting prowess for Marston’s benefit.

Initially beaten by superior numbers, Quigley is left in the desert for dead, along with a mentally unstable prostitute, Crazy Cora (Laura San Giacomo).  With the help of aborigines, they make their way through desert and outback to a town on the coast.  Quigley fights off Marston’s minions there, and he then takes the battle back to Marston for its ultimate resolution.

Selleck and Rickman are excellent in their roles, and their performances balance each other nicely.  The sole casting misstep is Laura San Giacomo as Crazy Cora.  She has too urban and modern a sensibility to seem at home in this kind of movie, but it survives nevertheless.

The movie has great scenery, a sense of vast spaces, wilderness, deserts, gunfights, aborigines and much more, along with an excellent soundtrack by Basil Pouledoris.  Australian director Simon Wincer has an affinity for westerns, having made his reputation with Lonesome Dove and several other made-for-television efforts with Selleck (and with very good production values).

Quigley’s modified 1874 Sharps.  In the film, Quigley says of his gun:

It’s a lever-action breech loader.  Usual barrel length’s thirty inches.  This one has an extra four.  It’s converted to use a special forty-five caliber, hundred and ten grain metal cartridge, with a five-hundred and forty grain paper-patched bullet.  It’s fitted with double-set triggers, and a Vernier sight.  It’s marked up to twelve-hundred yards. This one shoots a mite further.

Three fully functional .45-110 rifles matching the above description were built for the film in 1989 by the Shiloh Rifle Co. of Big Timber, Montana.  They also had a 15 1⁄4 inch length of pull to fit Selleck’s tall frame, a full octagon heavy barrel with a blue finish, and weighed 13 1⁄2 pounds.  Due to the weight, one of the rifles was sent back to Shiloh to be refitted with an aluminum barrel so it could be swung faster (as a club) in fight scenes.

If you’d like other “westerns” with an Australian setting, try The Man from Snowy River and its sequel, the much bleaker The Proposition, or even Australia, with its cattle drive and World War II.