Finally, in 2008, a DVD with a worthy version of this modern classic novel was released.  Although Lonesome Dove was made for television in the late 1980s, it was apparently filmed with a large budget in a widescreen format, as now shown on the 2008 DVD.  And the new transfer was of a significantly better, clearer quality than earlier releases.  One result is that this version gives a greater sense of the visual sweep and power of the American west than its more limited predecessors.

The spine of Lonesome Dove is the story of a cattle drive from Texas border country on the Rio Grande north to Montana, but it includes so much more:  Indians and renegades, scurrilous buffalo hunters and rough cowhands, romances current and past, outlaws and old friends gone wrong, Texas rangers and Mexican rustlers, battles against evildoers, miscreants, Indians and the elements.  Based on one of the greatest American novels of the 20th century, it takes the time to do justice to its rich source material.

How can the greatest western be something made for television?  It was the coming together of so many elements, including the rich and sprawling story, terrific cinematography, excellent music (by Basil Pouledoris), masterful direction, superb casting, and, perhaps most of all, the time to tell the story fully at its own pace and develop the characters. 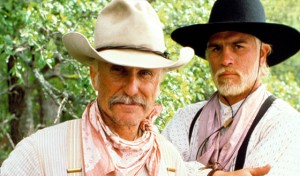 And the cast!  The casting is magnificent.  Some of the excellent cast members (Anjelica Huston, Diane Lane) are known best for their work in non-western films.  Others (Robert Duvall, Tommy Lee Jones, Chris Cooper) are icons well known from other westerns on this list.  Duvall is so good as romantic former Texas Ranger Gus McCrae that it is now impossible to think of anybody else in the role, although a younger McCrae has been played by others since.  Originally, James Garner was to have played Gus, but had to drop out for health reasons; he played Woodrow Call very creditably in the sequel Streets of Laredo miniseries.  Tommy Lee Jones, who is actually younger than Duvall, nevertheless matches him well as the unyielding, steel-spined Captain Woodrow Call.  Anjelica Huston as McCrae’s lifelong love Clara has one of the most memorable roles of her career, as does Diane Lane as the prostitute Lorena.  Danny Glover as the scout Deets is terrific.  It’s still strange to think of Frederick Forrest as the enigmatic but thoroughly evil Comanche Blue Duck, but even that bit of casting works.  Chris Cooper, in one of his first major roles, is oddly and quietly impressive as July Johnson, drawn out of a quiet life in Arkansas and thrust into the epic struggles around McCrae and Call.

There are vivid scenes that come to mind, and everyone has his favorites:  the death of a drover in a river filled with snakes, McCrae’s relentless pursuit of the elusive Blue Duck (who appears mysteriously and memorably in a flash of lightning), the hanging of an old friend gone wrong, Call decisively taking on the U.S. cavalry without hesitation (“I can’t abide rude behavior in a man”), McCrae and Clara trying to work out an old love, July Johnson coping with death and with the continuation of life, and Call’s inability to claim an important relationship, are only some.  Some things get resolved, and some seem not to; that’s life, and sometimes death.  It has an air of authenticity.  It stays with you. 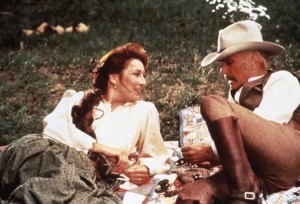 McCrae looks for a lost love with Clara (Anjelica Huston).

The McCrae-Call partnership around which this story revolves was loosely based on the Oliver Loving-Charlie Goodnight relationship from the 1860s; they’re the Texas pair who blazed the Goodnight-Loving Trail.  This version of the story was so powerful that it generated three more long novels (one sequel and two prequels) with the same characters from author Larry McMurtry.  None of those matches the novel on which this was based.  The others tend to get more sidetracked in the dark, the quirky and the wildly idiosyncratic, losing their grip on the themes and story that give the Pulitzer Prize-winning Lonesome Dove its powerful narrative thrust.  Some of them have been made into watchable miniseries themselves (Streets of Laredo, Comanche Moon), but none of them works as well as this original on the page or on screen.  The story of Lonesome Dove seems complete in itself, despite McMurtry’s insistence on giving more of it less compellingly in other novels.  As for made-for-television sequels not based on McMurtry novels, such as Return to Lonesome Dove, watch them at your own peril. 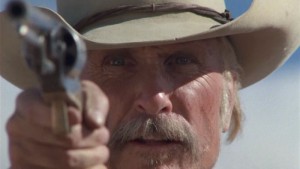 This was the first large-scale directing effort by Australian Simon Wincer, who has gone on to make both theatrical releases (Quigley Down Under) and excellent made-for-television westerns (Last Stand at Sabre River, Monte Walsh), including the Lonesome Dove prequel Comanche Moon.  He got it right the first time. 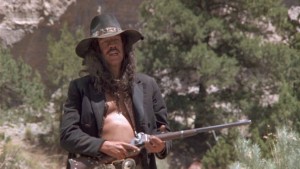 Blue Duck (Frederick Forrest), the worst of the bad guys, although there are a number to choose from.

Lonesome Dove and one other are often cited as the best miniseries ever, and their proponents tend to divide along gender lines.  The other is the BBC’s Pride and Prejudice (the 1995 Colin Firth and Jennifer Ehle version), and you can guess who likes which.  They’re both great, but only one of them is a western.