The title reference is to a phrase from the book of Revelation in the New Testament, also quoted more explicitly by the Johnny Ringo character in Tombstone.  The scripture refers to a pale horse with a pale rider, who is death.  In retrospect, this film is also apparently a remake of Shane, with Clint Eastwood even more mysterious and implacable than Alan Ladd’s gunfighter in the earlier movie.  The basic story is of small miners and settlers versus an established mining company in northern California’s gold country, with all the strength apparently on the side of the establishment.  Until the Preacher (Eastwood) rides in, that is. 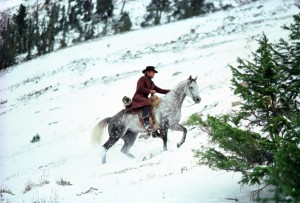 As in Shane, the principal miner/settler (Michael Moriarty) is somebody with strong moral and community sense but not the skills with violence to defend himself or his community.  And the principal settler’s woman (girlfriend, in this case, played by Carrie Snodgress) is attracted to the new, stronger intervener.  So is her 15-year-old daughter, setting up a new kind of potential conflict.  As in Shane, while defending the miner community, the Preacher remains visibly separate from them.  With Shane, there was the sense that Shane would like the kind of family and roots he saw among the settlers, but ultimately recognized that he could never be like them.  The Preacher never gets that close or makes any attempt to avoid violence.  He’s always definitely “other.”  From the beginning he seems to see the final climax is inevitable and strides unswervingly toward his role in it.

Unlike Shane, there is a suggestion of the supernatural and foreknowledge about the Preacher.  A shot of Eastwood’s unclothed back in one scene shows a pattern of bullet scars, repeated during the climactic shootout on another character.  It doesn’t seem that somebody with these scars could have survived the incident that created them.

There are also links with prior Eastwood films.  The supposedly dead character who returns for revenge is a Clint Eastwood specialty (cf. High Plains Drifter and Hang ‘Em High), as is a principal character with no name (as in A Fistful of Dollars and its sequels).

Two other elements of Shane are rather obviously repeated in Pale Rider.  There is a shootout in the street, where a miner is forced to face odds that he can’t possibly beat.  In Shane, it was a laughing, black-clad Jack Palance against Elisha Cook, Jr.  Here it is the corrupt Marshal Stockburn and six duster-clad deputies against one drunk miner in the street.  The result is the same, but even more ruthless.  And instead of the young boy yelling for Shane to come back at the end, here it is the 15-year-old girl.

As in Shane (and countless other westerns), there is a climactic shootout, very effectively done, with the Preacher against Stockburn and six deputies.  The corrupt Marshal Stockburn with six hired gunmen as deputies recognizes, and is shocked by the appearance of, the Preacher during the climax.  Stockburn is played by John Russell, who over the years played head bad guy Nathan Burdette in Rio Bravo and, briefly, Bloody Bill Anderson at the start of The Outlaw Josey Wales.  This role is kind of a reference to his years as Sheriff Dan Troop of Laramie in the television series Lawman from the early 1960s.  If the head bad guy’s son looks familiar, it’s because he’s Sean Penn’s brother Christopher.

The action can be a little slow; the Preacher doesn’t even put on a gun until about two-thirds of the way through the movie.  The sense is sometimes that director Eastwood is still working out some of what he learned from Sergio Leone twenty years before, with a few more reaction close-ups and low-angle shots than are really needed to tell the story.  Eastwood also plays with light and shadow in interesting ways.  And the outdoor setting in the Sawtooth Mountains on the Idaho-Montana border is magnificent.  One of the ways it’s made clear that the bad guys are evil is by the way they despoil the environment through their hydraulic mining practices.  You can also see one of the themes here as similar to Unforgiven—the former gunman’s unsuccessful attempt to reform into a more peaceful role.   Although much about Pale Rider suggests that it’s an obvious homage to Shane, it’s very much worth watching on its own.  It’s well done, and very Clint Eastwood. 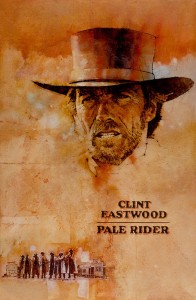 Pale Rider movie poster art by Michael Dudash. The original is in the possession of Clint Eastwood.