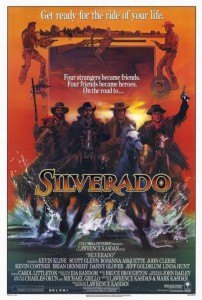 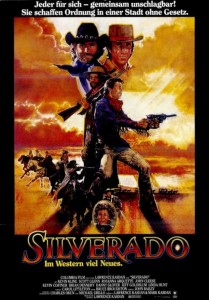 After his successes with Body Heat and The Big Chill, Lawrence Kasdan apparently felt the desire to try his hand at the seemingly-defunct large-scale western and now had the resources to do that.  Silverado is the result, a large-budget western that seems to have it all.

And that is its main problem.  There are so many elements to this story that they are not quite stitched together effectively.  There’s a range war with threatened settlers, there’s a group of emigrants making its way west, there’s racial tension and bigotry, there are outlaws reformed and mostly unreformed, there are shifty gamblers, there are corrupt sheriffs.  And guns, lots of guns.  No Indians, though.  You can tell that this movie started in the minds of the writers (the Kasdan brothers) with several characters and situations, not with one overarching story.  Still, it’s fun to watch, and it was especially appreciated when it was released, in an era when this kind of film was an anomaly.  There weren’t many westerns being made, and especially not good westerns with traditional themes.

It’s 1880 in New Mexico Territory.  The two principal characters are Paden, played by Kevin Kline, a one-time outlaw fallen on harder but more respectable times, and Emmett, played by Scott Glenn, recently out of prison after having killed the leader of the opposing side in a settlers vs. cattlemen range war.  Emmett’s now returning to Silverado and his sister’s family to sort out what’s next for him.  Only slightly less central are Mal (Danny Glover), a black man returning to his own family, and Jake (Kevin Costner in his first western role) as Emmett’s scapegrace younger brother.  The four of them return to Silverado, only to be engulfed by old situations with new twists. 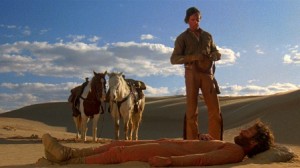 There is a host of excellent supporting characters, including Brian Dennehy as a gleefully corrupt sheriff, John Cleese as a less corrupt sheriff with an English accent, Linda Hunt as a diminutive saloon proprietor, gravel-voiced James Gammon as the leader of an outlaw band, Lynn Whitfield as Mal’s prostitute sister, Jeff Fahey as Dennehy’s lethal deputy and Jeff Goldblum as a slick gambler of uncertain allegiances.

So what doesn’t work here?  Two things:  First, Rosanna Arquette as a supposedly desirable newly-widowed emigrant woman.  It’s a thankless and underwritten role, and one gets the feeling that some significant part of it was left on the cutting room floor.  Arquette’s character desperately needs a note of humor and more desirability than shows up on the screen.  The other is the flip side of Paden’s own attractiveness.  He’s always cool, charming and smooth, and he never loses his temper.  While moving toward a climactic shootout (what else?), Paden sometimes has slightly too much good humor, with never a hard edge to show when he is pushed too far.  It seems too much like a game.  But these are quibbles, especially since Arquette’s character turns out not to be very important.

There’s lots to like in Silverado, and one has the feeling with many of the supporting characters that more could be made of them—that there was more story to be told.  There’s so much that’s so good that it gets a top ranking.  This movie is beautifully made, shot on location in New Mexico with top-flight production values.  It features an excellent operatic score by Bruce Broughton, in the finest Elmer Bernstein tradition.  The Silverado theme will stick with you for decades, perhaps because it’s always showing up at sporting events.  Director Lawrence Kasdan’s only other try at a western was less successful–1994’s Wyatt Earp, also with Costner. 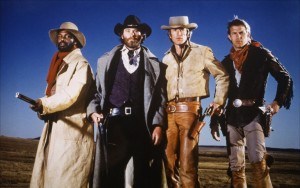