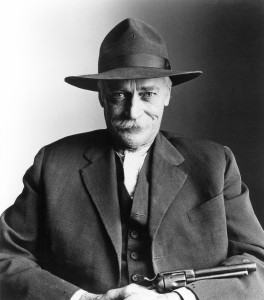 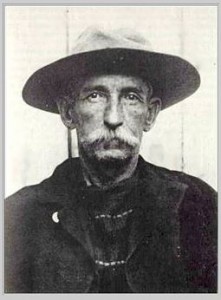 Richard Farnsworth as The Grey Fox, and the real Bill Miner

A small art-house film when it was initially released, it’s also one of the few great westerns that was long unavailable on DVD, so it remained largely unseen.  As of September 2020, that has changed with the release of a beautifully restored DVD and 4K blue-ray from Kino Lorber.  Note the Canadian spelling in the title.  This was a Canadian production, most of the story takes place in Canada, and it was beautifully filmed on location in British Columbia.  It has an excellent soundtrack with music by Canadian Michael Conway Baker and The Chieftains, although that soundtrack has never been released in the United States.  There’s a Celtic flavor to the sound, which works well with the time and setting.

The film is an end-of-an-era western based on the true story of Bill Miner, a stagecoach robber released from San Quentin in 1901 after 33 years in prison.  He tries to go straight, but it’s not easy at his age and with his lack of modern skills.  There aren’t many stagecoaches left to rob, but there are trains, so Miner adapts to the new transportation technology, aided by an inept young assistant named Shorty Dunn (Wayne Robson).

Meanwhile, the aging Miner, who is going under the name George Edwards, also begins a charming May-December romance with Kate Flynn (Jackie Burroughs), a younger liberated modern woman and photographer.  The romance, Miner’s new career as a gentleman train robber and its aftermath form the rest of the story for this movie.  There’s not much violence or hard language, although there is tension as Miner is hunted by the forces of the law.  The film’s pacing is slower than that of many westerns as relationships develop.  (Compare it to A Thousand Pieces of Gold, perhaps, although it has more action.)  But the elegiac pacing seems to fit the story and the actors, and it works well. 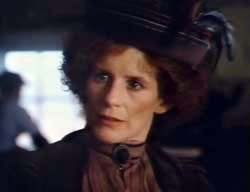 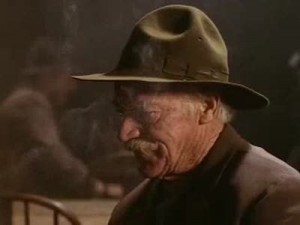 The movie is marvelously directed and acted.  At the time The Grey Fox was made, Richard Farnsworth was 61, with a 40-year career as a stuntman and minor supporting actor.  His role here is at the center of this movie, and he’s great.  Farnsworth’s voice, phrasing and intonations are unique, velvety and memorable, not to mention those gentle blue eyes and the terrific moustache.  Toward the end of his career, he played three marvelous roles, and this was perhaps the best of them.  (The others are Matthew Cuthbert in the Canadian television series Anne of Green Gables [1985] and Alvin in The Straight Story [1999], but during the 1980s after The Grey Fox he started getting meatier supporting roles in many movies.)  You have to believe in Miner and care about him for the movie to work at all, and Farnsworth is quietly superb.  Jackie Burroughs is also very good in her smaller role as the emancipated photographer and romantic interest.  The romance could easily have been not terribly believable, given the difference in ages and eras, but it works and works well.

In his calm, steady way, Farnsworth knew how remarkable his feat was, and he was appreciative of the opportunity.  He told the Associated Press in 1983, “I guess you might say that The Grey Fox is a kind of Cinderella story for me.  When I was a kid, I read in the western magazines about a skinny old guy with a moustache who came out of San Quentin after 30 years for stage robbing and tried his hand at train robbing.  Forty-two years later, I end up playing him in a movie.  I guess I grew into him.”  He was a natural presence in westerns, but he also worked well in such films as The Natural (1984).  He had significant supporting roles in Tom Horn, Comes a Horseman and The Two Jakes.  He even played Wild Bill Hickok in the execrable The Legend of the Lone Ranger (1981), although he was significantly older than Hickok ever got to be. 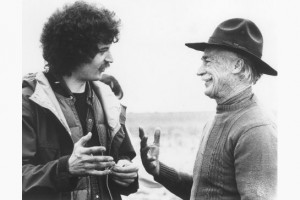 This gem was made with a limited budget; it didn’t have recognizable stars and was released principally in art houses.  It’s clearly on a different scale than, say, Silverado, which had much more to work with in terms of budget and stars.  But for what it is, it’s great, and it ends on a curiously upbeat note that you wouldn’t have seen coming with the generally autumnal feeling of the film.  Even in a film this small, Farnsworth got a Best Actor Oscar nomination for his role as Miner.  The film won the Best Film Genie, the Canadian version of the American Oscar, and Richard Farnsworth won the best foreign actor award (foreign, as in non-Canadian).

The director, Tasmanian-born Canadian Phillip Borsos, was only 27 when he made this movie, his first feature film.  He died in 1995 of leukemia at 41.

For another excellent and largely unseen small Canadian western check out Gunless (2010), with Paul Gross as The Montana Kid sidetracked in western Canada.  For another underrated but excellent relationship-oriented western, see the aforementioned A Thousand Pieces of Gold (1991), if you can find it.  It was not available on DVD, either, until 2020 when Kino Lorber did an excellent job with a re-release of it, too.

Note:  The real Bill Miner died in prison, but this story ends the way it should.