There’s an obvious gimmick to this movie, with several sets of actual brothers playing historical brothers.  The effectiveness of movies about the James gang must usually balance three characters:  Jesse, his brother Frank and their cousin Cole Younger.  Historically, Jesse was the most charismatic of the three, and making him seem so in a movie can be a challenge.  You can think of movies obviously cast with a charismatic Jesse first (as with Tyrone Power and Brad Pitt).  But in this movie Jesse (played by James Keach) seems a little remote and is perhaps less effective than his older brother Frank (Stacy Keach).  David Carradine as a long-haired Cole Younger has one of his best movie roles, along with brothers Keith and Robert as Jim and Bob Younger.  The Guest brothers are Bob and Charlie Ford, and the Quaids play Ed and Clell Miller.  Gimmick or not, the casting works remarkably well here. 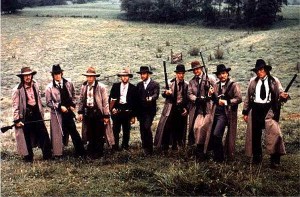 Three Carradines, two Guests, two Quaids and two Keaches.  The long linen dusters are historically accurate, worn by the gang because they could be used to cover up guns and firearms.

This western has a dim, dusty and rough-hewn look to it, appropriately evoking the post-Civil War era.  The music, composed and arranged by Ry Cooder, has an old-timey bluegrass-mountain flavor, also appropriate to the time and setting.  The outlaws wear grey dusters and other period gear, and it looks authentic but not glossy.  There are a number of good small touches here:  A three-man band swings into “Jack of Diamonds” at the gang’s favorite whorehouse, although it only plays three or four bars before the action cuts away; there’s a real community feel to the dancing at Jesse’s wedding; a solemnly drunk Clell Miller quotes Isaiah to a bare-breasted prostitute; and many others.  It means that small moments are engaging to watch even if the gang isn’t robbing a bank or a train or having a shootout with the Pinkertons.  Particularly notable among the supporting roles is Pamela Reed as Myra Belle Shirley (later Belle Starr), a whore who longs for semi-respectability through marriage to the rootless Cole Younger but will never get it. 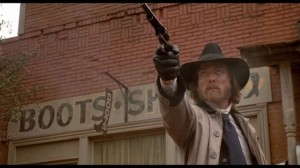 Like most movies about Jesse, this one is mostly sympathetic to the outlaws.  The Long Riders is more historically accurate than most, and was referred to on its release as revisionist because of that accuracy (and because of a certain amount of nudity).  The Pinkertons are generally unsympathetic here, as they could be in real life and as they are portrayed in most movies about Jesse James, although they are not unrelievedly so in this film.  There are a few inaccuracies, especially with the characters of Belle Starr (the impressive Pamela Reed) and Sam Starr (James Remar).  Some historical episodes are telescoped closer together for purposes of pacing.  Still, it’s good and marks the entry of director Walter Hill to a genre with which he clearly feels some affinity.

For contrast, look at the recent (2007) Assassination of Jesse James by the Coward Bob Ford.  The cinematography is a lot cleaner and just plain more magnificent in the newer film.  Brad Pitt as Jesse is more compelling than James Keach; you can see both the charismatic attraction and the psychotic edge, along with the weariness creeping in at the end of his outlaw career.  Casey Affleck is an unsettling Bob Ford, partly because the camera focuses on his face so often and so long when he’s not giving much away.  It makes him seem creepy, which is perhaps the point.  That film is interesting in some ways and visually beautiful, but it doesn’t move, which is a problem for a movie.  The Long Riders, now more than 30 years old, is still the best movie about the Jesse James gang. 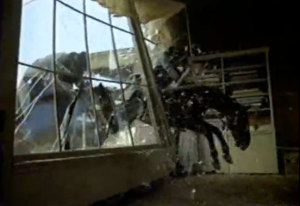 Frank and Jesse try to escape

Director Walter Hill is known for his association with and admiration for Sam Peckinpah, leading to a supposed preoccupation with violence.  The extended climactic sequence at Northfield, Minnesota, in which the James-Younger gang tries to rob a bank and is shot to pieces by the townsfolk, is one of extended violence, some of it in slow motion.  But it is well-staged, with good stunt work, and has a compelling quality to it, a horrific fascination—more, perhaps, than the more celebrated climax of The Wild Bunch.  When Jesse and Frank, seeking a way out of the death trap on the main street, burst through two sets of large windows on horseback and make their escape, that is visually impressive.  And when a cold-eyed Jesse makes the decision that he and Frank will leave the Youngers and Clell Miller behind because they’re all shot up and can’t ride, that seems like real Jesse.  It’s amazing that the Youngers survive their wounds; Cole is said to have been shot eleven times. 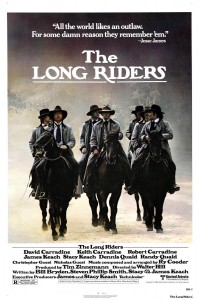 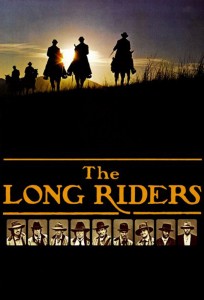 The Keach brothers not only have the lead roles here; they’re also listed as executive producers and have writing credits.  They, along with director Hill, deserve most of the credit for this successful venture into western history and action, especially in an era when westerns were no longer cinematically fashionable.  (This was released shortly after the Heaven’s Gate debacle and may have suffered at the box office by association.)  Hill and the Keaches do a good job in attempting to connect the James gang with their actual history.