Based on an Australian epic poem by Banjo Paterson, this is a young-man-triumphing-over-adversity-and-making-his-way-through-perseverance-and-force-of-character movie, set in the highlands of Australia.  It’s also a movie for horse lovers.  Tom Burlinson plays young Jim Craig, who’s trying to put together a respectable highland spread for himself after his father is killed in the movie’s opening scene.  While working for the local ranching baron Harrison (Kirk Douglas), he meets, falls in love with and tries to win the baron’s daughter Jessica (Sigrid Thornton).  Burlinson and Thornton are appealing as the young lovers.  Douglas plays a dual role as both the baron and his estranged one-legged prospector brother Spur; he occasionally gives in to a temptation to chew the scenery, especially in the prospector role.  Jack Thompson is good in a supporting role as Clancy, the legendary highlands horse and cattle man. 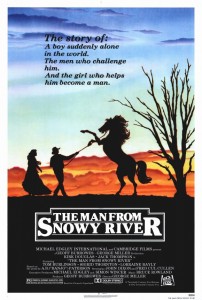 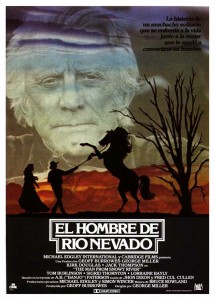 Craig captures and domesticates brumbies (wild horses) in the Australian highlands, and he’s good at it.  Based in more beautiful upland country than some Australian westerns, the cinematography is stunning, as are the chase scenes.  The most memorable images are of Craig hurtling down almost vertical slopes in pursuit of the brumbies, barely under control and only a slight misstep away from breaking legs and necks.  No other film has so successfully conveyed the joy of riding a horse full out, with the sense of speed, power and partnership.   There’s a very Australian feel about the movie, with class conflicts and the underdog-makes-good story.  There are incidental conflicts between Craig and a couple of ill-meaning other riders, and with the over-proud Harrison.

When Craig is sent to the highlands in pursuit of straggling cattle from the roundup, Jessica follows, only to be thrown by her horse and trapped on a cliff.  Reading the physical signs of what happened, Craig finds and rescues her, and they fall more deeply in love.  He completes the task and delivers the stragglers and Jessica back home; but he also encounters Harrison’s hostility to their relationship. 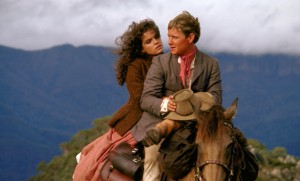 A fiery stallion (the first “foal of Old Regret”) released into the wild years earlier by an angry Harrison is now the leader and protector of the highland brumbies.  Now Harrison has purchased the last colt of Old Regret for £1000.  Jim Craig tames it, but when he leaves it is allowed by troublemakers to run off with the brumbies.  An enraged Harrison convenes all the riders in the vicinity; Clancy brings along Craig, who would otherwise not be welcome.  In the chase, the brumbies take off down slopes so steep riders can’t follow—except for Craig and his mountain-bred mount.  He brings them in and Harrison gets his colt back.  Craig claims twelve brood mares and says he’ll be back for them “and whatever else is mine,” looking at Jessica.  And that’s where the movie ends, without showing explicitly what happens to the young lovers or to the untamable leader of the brumbies. 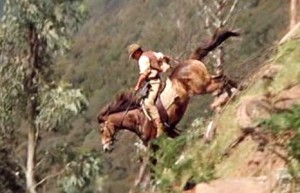 Hurtling down the hills, with no stunt rider.

The basic plot is fairly ordinary, but here it’s done well.  The movie’s beautiful setting in the wooded Australian highlands, decent acting, excellent cinematography and a good romantic musical score by Bruce Rowland make it quite enjoyable.  The sight of riders in their Australian hats and flying coattails, with their drover whips cracking like gunshots, evokes a longing to be with them.  Without much violence or harsh language, it has been characterized as a “family film,” but that is too limiting.  The director is the Australian George Miller, but not the more famous Australian director of the same name who made the Mad Max movies and Babe.  There is a passable sequel, Return to Snowy River (1988), which is a bit more formulaic but still watchable.  Jim Craig’s highland homestead, built for the movie, became a kind of Australian national historical site until it was destroyed by wildfires more than twenty years later.

There was a 1920 Australian silent movie with the same title based on the Banjo Paterson poem, but that is now considered lost.