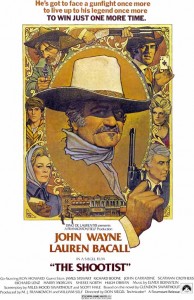 The Richard Amsel poster for The Shootist is typical for the 1970s and 1980s.

An elegiac end-of-an-era western, as the titular shootist, gunfighter John Bernard Books (John Wayne), literally and figuratively comes to the end of his road with considerable dignity.  This is also a coming of age story for Gillom Rogers, well played by the young Ron Howard.  And it was the last movie in the remarkable career of John Wayne, then 68 and dying of terminal stomach cancer.

The movie opens with an effective montage of shots from earlier Wayne movies, from Red River to Hondo to Rio Bravo to El Dorado, as Books supposedly ages, with a voiceover by Ron Howard.  The Books credo sounds persuasive, coming from a character with the physical and historical heft of John Wayne:  “I won’t be wronged, I won’t be insulted, and I won’t be laid a hand on.  I don’t do these things to other people, and I require the same from them.”  In 1901 Books is heading to Carson City, Nevada, where all the action in the movie takes place.  The Old West is passing, and so is Books himself. 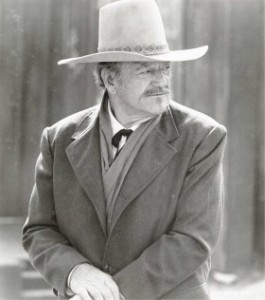 J.B. Books (John Wayne) arrives in Carson City at the turn of the century.

Books is in fact dying of cancer and is looking to live out whatever time is left to him with as much dignity as he can muster.  How he goes about this makes up the remainder of the movie.  It moves more slowly than most John Wayne westerns, but we’re happy enough to see him on the screen that it doesn’t drag and it never becomes unduly sentimental.  Howard is good as a fatherless, sometimes mouthy, teenager looking for role models.

The movie has some excellent actors in cameos and character roles:  James Stewart as a doctor, Lauren Bacall as the widowed operator of a boarding house and mother of the young Howard, Harry Morgan as an obnoxious marshal, and the funereal John Carradine appropriately cast as an undertaker.  You sense that there could have been a relationship between Books and the Bacall character if only Books had more time left to him, although if she’d known who he was she wouldn’t have let him stay at her boarding house in the first place. 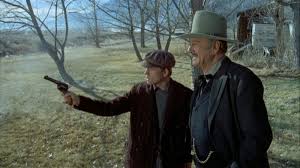 And then there are the villains, played by Hugh O’Brien, Richard Boone and Bill McKinney.  One gets the feeling that none of them had enough dramatic weight to balance the Books character, so there were three.  They still don’t balance with Books.  Richard Boone is always good to watch, but this isn’t his best role, and he seems more curmudgeonly than downright bad.  He deserved a better-written character with more lines and personality, and perhaps a touch of his traditional villainous courtliness.  This was one of the last movies for both Boone and Stewart as well as for Wayne.  A generation of actors was passing.

In his final shootout, Books (John Wayne) takes on three separate bad guys at once.

As in The Cowboys, the John Wayne character doesn’t come out of this alive.  But he wasn’t going to, given the setup of the movie, and it’s a pleasure to watch the grace with which he accomplishes it.  It’s hard to imagine anyone else in the role, but it’s said that the producer approached Paul Newman and George C. Scott first.  At the time there was no certainty that it would be Wayne’s last picture, but it was a strong way to go out.

Don Siegel directed a couple of westerns, but he was known more for his work with Clint Eastwood in Dirty Harry and Escape from Alcatraz.  The music is by Elmer Bernstein, a long-time master of the traditional movie score, including many westerns.  This was based on a decent novel of the same title by Glendon Swarthout.

It was the Bicentennial summer, and this was one of two great westerns released.  The other was The Outlaw Josey Wales, and they both remain highly watchable.