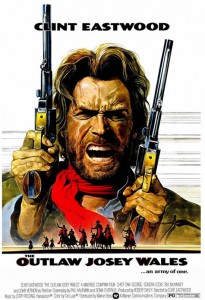 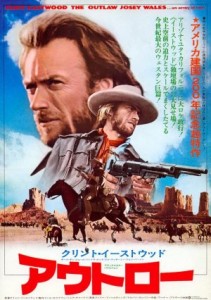 The nation’s bicentennial year of 1976 was a watershed for westerns.  The early 1970s had seen a number of westerns, many of them “revisionist” or strongly influenced by spaghetti westerns.  The summer of 1976 saw the release of two excellent traditional westerns:  The Shootist and The Outlaw Josey Wales.  And then the genre fell completely out of fashion and largely disappeared.

The Shootist marked the end of the cinematic career of John Wayne, and it is tempting to see that as the end of westerns generally.  But The Outlaw Josey Wales in the same year was an early directorial effort of Clint Eastwood, who would become one of the great western directors as well as continuing to reinforce his status as a great western star.  And Bill McKinney managed to be in both The Shootist and Wales as a villain, a remarkable accomplishment.

Wales (played by Eastwood) is a Missouri farmer at the start of the movie.  His family is killed, and he is left for dead, by Union-sympathizing Kansas Redlegs led by McKinney’s character.  Wales joins southern border guerrillas under Bloody Bill Anderson and rides with them through the Civil War.  In the fighting, Wales has honed his skills as a warrior, particularly as a “pistolero.”  All this is set up economically at the start of the movie. 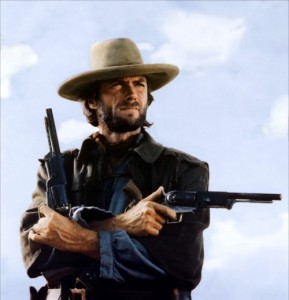 Refusing to surrender with the rest of his guerrilla band at the end of the war, Wales heads south into the Indian Nations (now Oklahoma) and Texas with a price on his head, pursued by the vengeful Yankee Redlegs.  Along the way, he picks up two Indian companions—Lone Watie, an old Cherokee (played memorably by Chief Dan George), and Little Moonlight, a Navajo woman escaping from captivity with Cheyennes, Arapahoes and white trash.  Wales rescues what is left of a Jayhawk family from scurrilous Comancheros, and he bonds with the inhabitants of the small, dusty Texas town of Santo Rio, where the Kansans are headed.  He has accumulated a new family and taken on more humanity, but before he can settle down he has to deal with hostile Comanches and the nasty Redlegs pursuing him.  However, the only thing worse than continuing to pursue Wales is catching him.  When there is no way out, he doesn’t waste time trying to back away.  “You gonna pull them pistols, or whistle ‘Dixie’?”

Dan George almost steals the movie in his restrained way.  The interplay between Wales and Watie features an understated humor, with Watie frequently having the last word.  Wales tries to discourage Watie from coming along with him:  Referring to the death of family and earlier companions, he notes, “When I get to liking somebody, they ain’t around for long.”  Watie replies, “I notice when you get to disliking somebody, they ain’t around for long neither.” 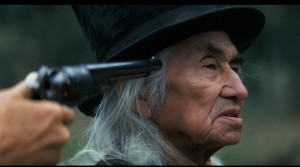 Wales demonstrates his ability to sneak up on an Injun (Chief Dan George).

There are nice casting touches throughout the movie.  John Vernon is good as the conflicted traitor/hunter Fletcher.  Bill McKinney is relentless and despicable as the leader of the Redlegs.  Sam Bottoms gives what may be the best performance ever by any of the Bottoms brothers, playing a dying young Confederate from Alabama in the early part of the movie.  Will Sampson has an appropriate gravitas as Ten Bears, the Comanche chief.  John Russell briefly appears at the start as Bloody Bill Anderson, and Richard Farnsworth is one of the Comancheros.  The denizens of Santo Rio make a nice ensemble, including longtime western character actor Royal Dano.  The weak point in the cast is Sondra Locke as Wales’ romantic interest, but she was Eastwood’s girlfriend at the time.  And she doesn’t get in the way that much.

The Outlaw Josey Wales has a nice look to it.  It’s not as glossy as some westerns, but the interior lighting seems more authentic, and the backwoods characters dirtier than in more Hollywood-ized period westerns.  Wales carries multiple pistols (Walker Colts, which were substantial), two prominently at his waist (not tied down on his legs).  He can also use a rifle to good effect, as he does to give the Redlegs a “Missouri boat ride.”  The movie was filmed on the Feather River in northern California and in southern Utah, and uses its settings well. 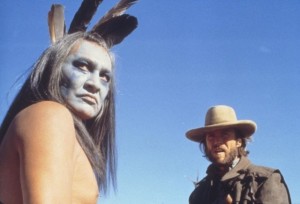 There’s a fair amount of violence in this one, and Wales displays one of the very best cinematic versions of the famous “border shift,” in which the gunfighter reverses the positions of his guns to put them in firing positions.  In addition to sporadic violence throughout the movie, rather a lot of Locke gets flashed when she is attacked by the loathsome Comancheros.

One historical quibble:  At the end of the movie, a couple of Texas rangers show up in Santo Rio to document the end of Josey Wales and close the case.  This would be 1865 or 1866, and the Texas Rangers had not yet been reconstituted after the Civil War, since the federal authorities in Texas didn’t want any local law forces with dubious loyalties

Eastwood would yet make more westerns, but only a couple more.  They’re good, though:  Pale Rider and Unforgiven, also on this list of great westerns.  Josey Wales doesn’t have the pure nasty punch that the later Unforgiven does, but it has much more re-watchability.  The underlying novel, Gone to Texas by Forrest Carter, is decent, too.