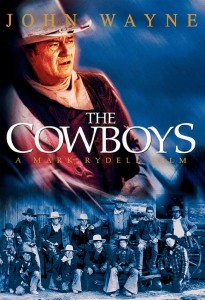 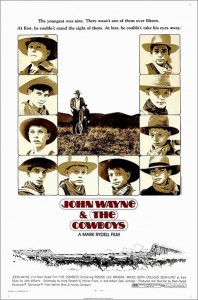 This is one of the two great cattle drive westerns starring John Wayne.  The other is Red River, which admittedly is better and was more ground-breaking in its day.  But this is excellent in its way and has aged fairly well in the more than 40 years since its release.  John Wayne carries this movie pretty much on his own; although the supporting roles are well-played, they are significantly smaller than Wayne’s.

Andersen and his recruits (click on the picture for better focus).

The emphasis in the title is on the “boys” part, although the cows are certainly present as well.  Aging Montana rancher Wil Andersen (Wayne) finds himself without his usual help when it’s time to drive his cattle 400 miles east to market in Belle Fourche.  In desperation, he is forced to take on eleven young boys as his drovers, and it is a coming-of-age exercise for them.  They encounter Colleen Dewhurst and her bevy of soiled doves, as well as rough men of questionable motives, as they do their growing and learn their trade.  Like many other westerns (The Outlaw Josey Wales and The Shootist, for example), this one is also about the search for family and belonging.  Andersen can offer them knowledge and opportunities they don’t yet have and becomes their hard-edged father figure; they become the replacements for his own dead sons.  It all works.

It was no secret when this movie was released that a John Wayne character would get killed for the first time ever in a western, or at least for the first time since he had become a major star (with the exception of The Alamo, of course).  That provided part of the punch of the film on its initial release.  The rest of the impact was in the way it was done, by the near-psychotic villainy of Bruce Dern as Long Hair/Asa Watts.  Wayne told Dern that everybody would hate him for the role; Dern said he responded, “Maybe, but they’ll love me in Berkeley,” a reference to distaste among some on the left for Wayne’s right-wing politics. 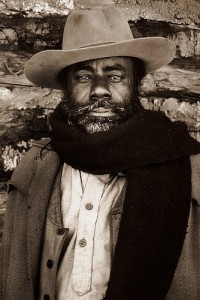 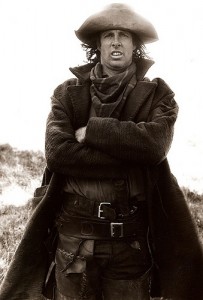 When the movie was released in 1972, the country was still in the midst of a strong wave of anti-Vietnam war sentiment, and many thought that the way the rest of the movie played out after Anderson’s death glorified too much violence by boys too young.  But that seems less of a worry on re-watching; a greater problem lies with incomplete believability in that sequence.

Jebediah Nightlinger:  [praying to God as he’s about to be hanged by Asa Watts and his gang]  “I regret trifling with married women.  I’m thoroughly ashamed of cheating at cards.  I deplore my occasional departures from the truth.  Forgive me for taking your name in vain, my Saturday drunkenness, my Sunday sloth.  Above all, forgive me for the men I’ve killed in anger [eyes shifting to Asa Watts] … and those I am about to.” 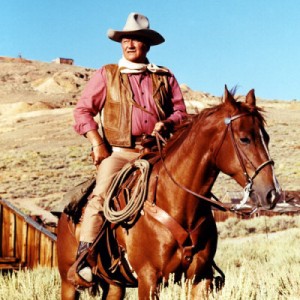 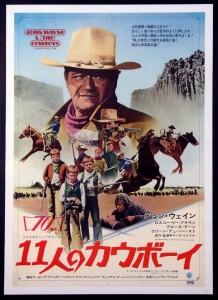 Still, it’s a good movie, and an excellent western.  Young director Mark Rydell (The Rievers, On Golden Pond) said he wanted George C. Scott for the lead role at first but was persuaded by the studio to go for Wayne’s surer box office clout instead, despite Rydell’s personal distaste for Wayne’s politics.  It was a smart move.  Although Scott was an excellent actor, he didn’t carry the same authority in westerns that Wayne did.  It’s a fairly simple plot, and the film takes its time getting things set up before the cattle drive actually takes off.  But overall the movie’s pacing works well.  It was shot in New Mexico with a lot of dust, textures, long vistas and beautiful mountains.  The John Williams score is excellent, with a touch of some guy named Vivaldi.

In addition to Dern’s wonderfully loathsome badness, Roscoe Lee Browne gives a strong performance as Jebediah Nightlinger, the drive’s cook and the first black man these young men have seen.  Browne plays Nightlinger with perhaps the most perfect diction and Shakespearean delivery ever heard in a western.  Colleen Dewhurst is great in her brief role as the madam of a traveling group of soiled doves, and Sarah Cunningham shows a lot of character as Anderson’s wife.  Richard Farnsworth is a member of Long Hair’s gang, a decade before he started getting meatier roles.  Among the boys, A Martinez as Cimarron, the outsider (and the oldest), and the young Robert Carradine as Slim are particularly memorable.  But the boys all make an effective ensemble.  Five of them had experience acting, and the rest were from ranching and rodeo backgrounds.  They work together well. 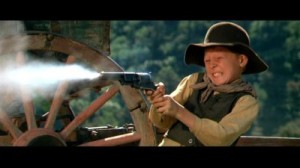 John Wayne had some strong performances in the last part of his career, from True Grit to The Shootist.  Along with those two, The Cowboys and Big Jake are memorable.  Of course, he was in some duds as well, such as The Train Robbers and Rio Lobo.  But that’s not a bad batting average.