In Peckinpah’s earlier Ride the High Country, two former lawmen were playing out their string in a corrupt turn-of-the-century west.  In The Wild Bunch, there’s no hiding the fact that the protagonists are a gang of bandits and savage killers coming to the end of their time in an even more corrupt revolutionary Mexico.  Eventually they find unexpected humanity, even heroism, in that end.  “I was trying to tell a simple story about bad men in changing times.  The Wild Bunch is simply what happens when killers go to Mexico.  The strange thing is you feel a great sense of loss when these killers reach the end of the line.”  That’s what director Peckinpah says he was trying to do, but it’s more than that.

The title notwithstanding, this doesn’t deal with the outlaw group historically known as the Wild Bunch—that was Butch Cassidy’s gang of bank and train robbers.  Like Butch Cassidy and, to some extent, True Grit in the same year, this is an end-of-an-era western.  The outlaw gang has reached the end of its time and knows it.

It is 1913, just before World War I—an era of multiple revolutions in Mexico.  The fictional outlaws in question are led by Pike Bishop (William Holden, in one of his last good roles).  Other members of the gang are played by Ernest Borgnine, Warren Oates, Ben Johnson, Edmond O’Brien and Jaime Sanchez.  Robert Ryan is Deke Thornton, a former member of the gang captured and forced by the authorities to help track down his onetime comrades.  The movie opens with a memorable image of several children torturing a large scorpion with ants as the gang rides into a town, and the analogy of the scorpion to the gang will become obvious.  In the town, the gang botches a train station robbery, is shot up and then looks for a last big score.  They find it south of the border, agreeing to steal U.S. military weapons from a train for the benefit of Mexican revolutionaries.  However, there is a falling out with their employers on this job, and the climax of the movie involves a long shoot-out between the outlaws and the corrupt revolutionaries, which the outlaws cannot possibly win. 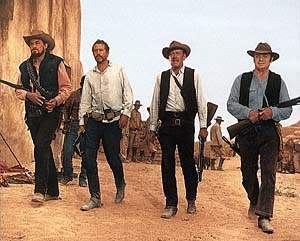 The shoot-out scene is reminiscent of the final scene of Butch Cassidy, released the same year.  Both involve outlaws in a final fight against overwhelming odds south of the border.  A major cinematic difference, however, is that Butch Cassidy ends with a freeze frame of Butch and Sundance emerging from their cover and firing at the Bolivian army.  In a sense, they never really die because we don’t see the effects on them of the hail of bullets we hear.  The famous end of the fight in The Wild Bunch features extended slow-motion violence as each member of the gang is cut down while slaughtering as many Mexicans as possible.  In that slow-motion violence, it also has much in common with the end of Bonnie and Clyde from two years earlier.  Some felt that The Wild Bunch glorified violence too much, and it certainly influenced the way violence has been shown in westerns ever since.  That’s why most of the good westerns in the last two or three decades have R ratings.  Butch was lighter and more enjoyable; The Wild Bunch was more influential among cineastes.

Playing Pike Bishop is one of William Holden’s best performances ever.  The role was originally slated to go to Lee Marvin, but he dropped out to make Paint Your Wagon (bad career move).  Holden made this at a time when drinking and hard living were taking their toll on his appearance and acting skills, but here he was still very good.  As with central characters Charlton Heston in Major Dundee, and Joel McCrea in Ride the High Country (earlier Peckinpah movies), the movie depends on Holden’s ability to keep our interest and sympathies.  He does it well.  Ernest Borgnine is excellent as Dutch Engstrom, Bishop’s principal support in the outlaw band.

This is also one of the last roles for Robert Ryan, who plays Deke Thornton, conflicted as he leads a group of despicable bounty hunters in tracking down his former friends (much like the John Vernon role in The Outlaw Josey Wales).  Few actors in westerns played conflicted as well as Ryan (see Day of the Outlaw and Lawman, for example).  As edited for the film’s theatrical release, Thornton’s principal function is as audience surrogate, telling us what to think about what are actually repulsive-seeming outlaws, but are in many ways more admirable than the other characters with whom they come in contact:  railroad executives and detectives, bounty hunters theoretically on the right side of the law, corrupt Mexican revolutionaries, even German militarists.  Everybody’s corrupt, it seems to say; you just get to choose the direction and the degree of your corruption. 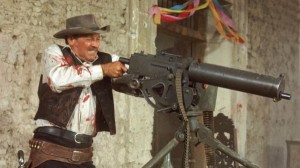 The film also has good supporting performances from Peckinpah regulars Ben Johnson and Warren Oates (as the outlaw Gorch brothers), Strother Martin and L.Q. Jones as sleazy bounty hunters, and Bo Hopkins in his first role as a feeble-minded gang member abandoned and killed in the early railroad office holdup.  Edmond O’Brien is the old horse wrangler for the gang.  There are no significant female roles in the film, but even those few females are less admirable in their way than the outlaws who are their customers.

The depiction of many of the Mexicans now seems a little dated, but it’s still powerful.  They’re mostly caricatures and prostitutes.  Jaime Sanchez as Angel, the Mexican member of the outlaw band, may have deserved better.  Much of the movie was filmed in Mexico, a favorite Peckinpah location as well as the actual setting for this movie’s action.

Most would see The Wild Bunch as Sam Peckinpah’s masterpiece.  Others prefer the earlier Ride the High Country, as a purer story.  The Wild Bunch certainly has a lot more moral ambiguity; there are no purely admirable characters, just strong ones and weaker ones.  There are some themes of honor and loyalty, but it’s not certain what they mean or exactly how they apply.  The Wild Bunch shows some development in cinematic abilities from High Country (the memorable scorpion image, for example) and it’s near the peak of Peckinpah’s depiction of male bonding and love of violence.  Even in this great movie, however, there are signs of the self-indulgence that marred much of the director’s career.  Decades later, the violence still seems savage and excessively gory.  The glorification of drunken roistering as central to male bonding seems somewhat misplaced, although it fits with Peckinpah’s own views and life.  As with some earlier Peckinpah movies (notably Major Dundee), and almost all later ones, Peckinpah had continual battles with the studio over his inability or unwillingness to control the film’s budget and shooting schedule.  This one is a great western and a strong one, but it’s also one of those, like Unforgiven and even The Searchers, which can be easier to admire than to watch again, mostly because of their emotional roughness.

The cinematography by Lucien Ballard is marvelous.  There’s a brilliant shot, for example, of an exploding bridge dumping a dozen horsemen into the Rio Grande, and another of horses and their riders tumbling down sand dunes where you can taste the sand and dust.  The movie has many memorable images, but not a lot of memorable lines.  The lines you do remember seem unremarkable by themselves; it’s the situations which cause you to remember them.  When Bishop says to his gang, “Let’s go,” for example, you know then (and you sense that they know) they won’t survive, and you remember that feeling.  Bishop’s ethos is expressed in his rationale for not breaking up the gang:  “We’re not gonna get rid of anybody!  We’re gonna stick together, just like it used to be!  When you side with a man, you stay with him!  And if you can’t do that, you’re like some animal, you’re finished!  We’re finished!  All of us!”  But it isn’t like it used to be, and the suggestion is that it probably never was.  They are finished, and they’re just trying to find a way to play it out.  The screenplay and Jerry Fielding’s score were nominated for Oscars; they didn’t win. 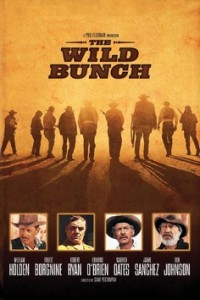 In the DVD age, there is a director’s cut of the film (144 minutes), released in 1994, although Peckinpah was long dead by then.  It includes more of the relationship between Pike Bishop and Robert Ryan’s Deke Thornton, giving the Thornton character more weight than he had in the theatrical release.

This movie did not spring fully-grown from nowhere.  It owes something to The Professionals three years earlier, to the sensibility and look of Sergio Leone’s spaghetti westerns, and to Bonnie and Clyde two years before.  But it is clearly its own Sam Peckinpah movie, too, and has itself become very influential far beyond westerns.  As a western, its limitations may be that it lies on the fringes of western themes and leaves a feeling of nihilism and discomfort for reasons that can be hard to define.  Roger Ebert referred to it on its release as “possibly the most violent film ever made,” and more than 40 years later that violence has not lost its impact or its controversiality.  And it has influenced just about every western (and many movies in other genres) made since.

This was not just an “end-of-an-era” western; it was also one of several “end of the western” films, supposedly tolling the death of an entire genre of movies.  It was the end of its era in westerns, certainly, and the beginning of another one.  The lover of westerns can find quite a few great westerns in the 40-plus years since this one, including such other “end of the western” movies as The Shootist and Unforgiven.  According to Roger Ebert, one of the film’s stronger proponents, “It represents its set of sad, empty values with real poetry.”  He recommended the restored 144-minute cut.  The Wild Bunch is one of the five westerns listed by the AFI on its list of the 100 greatest American movies, along with High Noon, The Searchers, Butch Cassidy and the Sundance Kid. and Unforgiven.  (See http://www.afi.com/100years/movies10.aspx.)

For more details on the making and significance of the film, see The Wild Bunch:  Sam Peckinpah, a Revolution in Hollywood, and the Making of a Legendary Film, by W.K. Stratton (2019).