This is a cavalry movie, almost the last good one in a sub-genre that has since become even less fashionable than westerns are generally.  (But see Ulzana’s Raid, about five years later—that’s probably the last good cavalry movie.)

In the opening scene, army scout Jess Remsburg (James Garner) is hidden on horseback amid the rocks, looking through binoculars at an apparently dead colleague strung up Indian-torture-style.  As he watches, another white man rides slowly into the same desert bowl of sand and rocks.  The white man’s horse collapses, and the man staggers to his feet.  Remsburg sees, as the horseman apparently does not, that two armed Apaches are quickly approaching on foot.  He rides out of the rocks, knocks the horseman out of harm’s way and shoots one of the Indians.  He helps the horseman to double up on his own buckskin horse, discovering that he is in fact a she—Ellen Grange (Bibi Andersson). 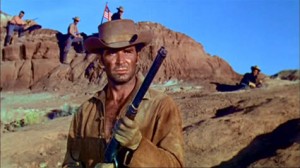 Taking her back to Fort Creel, Remsburg meets her husband Willard (Dennis Weaver), who is not all that thrilled to have her back.  Ellen spent a year in captivity among the Apaches earlier in her life and was subsequently rescued by cavalry.   This time Ellen was trying to escape white society and go back to the Indians.  Remsburg is enlisted by Lt. McAllister (Bill Travers), recently promoted up from the ranks, to guide a troop of 24 very green cavalrymen to Fort Concho along with ammunition wagons.  Willard Grange gets the fort’s commanding officer to force McAllister to allow him to go along with the patrol despite the danger from the marauding Apaches.  Forced to go along as well is former buffalo soldier Sergeant Toller (Sidney Poitier), who has to go in order to receive payment for horses already captured and delivered to the army.  It will be dangerous, since Chata’s hostile band of Apaches has jumped the reservation and is in the vicinity.

Meanwhile, McAllister acquaints Remsburg with some details of the death of Remsburg’s Comanche wife, handing over her scalp.  He says he got it from the gunman-marshal Clay Dean (John Crawford) at Fort Concho, giving Remsburg some incentive to guide McAllister’s cavalry there.  As the patrol makes its way to Fort Concho, Chata, who has more than twice as many warriors as McAllister has inexperienced soldiers, finds its trail and attacks.  McAllister is hit twice with arrows, but the survivors of his patrol manage to fight their way into Diablo Canyon, which has water—water, but no way out.  They have to fortify themselves in the box canyon and hope for relief from Fort Concho.

Meanwhile, Ellen Grange has managed to find her way back to Chata’s band, where her motivation for doing so is revealed:  she has an infant son by Chata’s now-deceased son.  However, the Indians don’t like her any better than the whites do, and plan to kill her as soon as it’s convenient.  Until Remsburg rescues her again, this time with the baby, too. 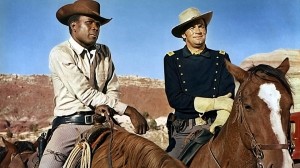 Toller (Poitier) and McAllister (Travers) set out for Fort Concho.

Hope is disappearing for the remnants of the patrol in Diablo Canyon.  Toller has taken over effective command for the badly wounded McAllister.  After leaving Ellen Grange with her husband again along with the remnants of the besieged patrol, Remsburg makes his way to Fort Concho for reinforcements, but it’s doubtful those reinforcements will arrive at the canyon in time to save McAllister’s men.  Meanwhile, in Fort Concho Remsburg finds out who killed his wife and deals with the nasty gunman-marshal.

It’s a good movie, but a grim one.  Some find it violent, but most of the violence is shown indirectly, except for soldiers being hit with arrows.  There are references to Indian tortures and a real sense of the dwindling numbers of the patrol and its reduced chances for survival as the movie goes on.  This is a socially-conscious western in which the lines between Indian and white make a lot of difference in various ways to the characters.  The Indians are accorded a certain dignity without minimizing their tendency to torture captives and enemies. 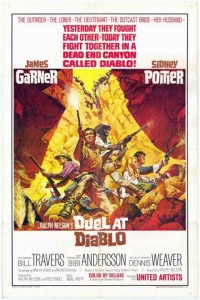 James Garner is also excellent in his grim mode here, as in Hour of the Gun.  His haunted but capable scout character is central to the movie, but the movie is largely an ensemble effort.  Bill Travers is excellent as the openly Scottish Lt. McAllister, the ambitious soldier promoted from the ranks.  Sidney Poitier was at the peak of his career when this movie was released, and he projects both authority and a don’t-mess-with-me dangerousness.  He is too urban to be a natural in westerns, as Garner is, but he’s effective as the ex-buffalo soldier.  (Note some of the film editing when he’s supposedly breaking horses, for example; he obviously hadn’t much experience riding.)  It’s not clear why Ellen Grange has a Swedish accent, but nobody seems to worry about it.

When the relief column from Fort Concho takes off, Col. Foster, the commanding officer, is played by Ralph Nelson, the movie’s director, who is listed as Alf Elson in the acting credits.  A television director in the 1950s and a director of mainstream movies in the 1960s, Duel at Diablo was the first of his two westerns, both cavalry movies.  (The other was 1970’s Soldier Blue, about the Sand Creek massacre—a stronger anti-military statement but less effective movie.)  Some find the music dated by now, and it does seem identifiably of the 1960s, unlike the more enduring music of, say, Elmer Bernstein or Ennio Morricone.

Shooting on location near Kanab, Utah; photograph taken by director Ralph Nelson.  Click on picture for a higher resolution image.