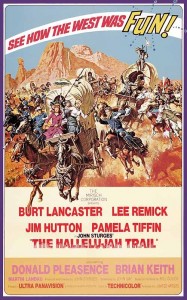 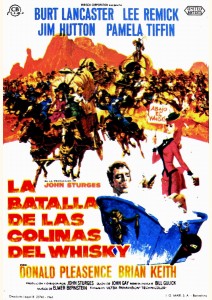 Director John Sturges was good with large-scale action material in 1960s films like The Magnificent Seven and The Great Escape.  Although lighter in emotional content than those epics, The Hallelujah Trail was a similarly large-scale production under Sturges’ capable direction.  He had also demonstrated a high degree of skill with smaller-scale 1950s westerns like Escape from Fort Bravo, The Law and Jake Wade, Last Train from Gun Hill and Gunfight at the OK Corral.

The plot involves the coming together of several parties with disparate aims in the fall of 1867.  Frank Wallingham (Brian Keith) leads a wagon train of liquor bound from Julesburg to Denver, trying to make it before the anticipated long, harsh Rocky Mountain winter sets in.  Oracle Jones (Donald Pleasance), an alcoholic seer, advises the Denver Citizens’ Militia, a group of miners who want to make sure that the booze gets through.  Cora Templeton Massingale (Lee Remick) shepherds a group of temperance women who want to see that the liquor doesn’t arrive.  Chiefs Five Barrels (Robert J. Wilke) and Walks-Stooped-Over (Martin Landau) head a band of Indians who are after the liquor, rifles or anything else they can get.  And Col. Thaddeus Gearhart (Burt Lancaster) commands the cavalry protecting the liquor caravan from Indians and the temperance women from who knows what.

Oracle Jones has a vision.

The indications are that it will be a long, severe winter in Denver, and through a series of oversights and mishaps, the town is almost dry just before winter sets in.  During the first half of the movie, the motivations and undertakings of the various parties are set up, with some character development, including a bit of interesting sexual tension between Col. Gearhart and Mrs. Massingale (a widow).  At the start of the second half the parties converge in the middle of a large sandstorm where none of them can tell what’s going on.  The “battle” in the sandstorm is expertly staged and edited, and entertainingly presented.  A truce is eventually arranged, at which all parties (including aggrieved and activist Irish teamsters), agree to the deal brokered by Gearhart and then start out to subvert the agreement immediately.  In the end, nobody really gets what he wants, and everybody sabotages everybody else.  The liquor sinks into a bog, Mrs. Massingale hooks up with Gearhart, and the winter in Denver proves to be one of the mildest ever. 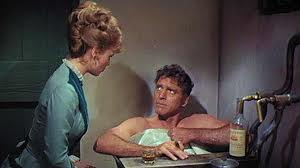 The cast is excellent, especially Lancaster and Remick in the central roles.  Brian Keith’s Republican booze merchant gets a little tiresome, but that’s the way his role is written.  Donald Pleasance is memorable as Oracle Jones, whose visions are fueled by alcohol.  The Indians (clearly played by non-Indians) are very politically incorrect these days.  And Jim Hutton and Pamela Tiffin are duly attractive as the young lovers with competing loyalties.  Veteran character actor John Anderson has one of his best roles ever as Gearhart’s gruff, long-suffering sergeant.  Character actor John Dehner provides excellent straight-faced voice-over narration from time to time, although he’s uncredited.

Some will be put off by the comic alcoholic Indian stereotypes, played by white character actors (Robert Wilke, Martin Landau).  But everybody in this movie is a stereotype:  the stiff authoritarian cavalry commander, the clueless sergeant, the heedless and hormonally-driven young lovers, the alcoholic miners, the Irish teamsters, the humorless temperance women, the Republican businessman.  The humor comes from the collision of all these stereotypes and their respective agendas, with no really serious casualties.  Most of them (including the Indians) have to bend their agendas in some way, and the working out of those agendas provides the entertainment. 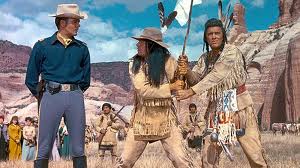 Although the movie is a long one (it was shown with an intermission during its theatrical release), in the end it doesn’t have much substance.  It’s just enjoyable light entertainment, with an excellent cast.  It could have been more tightly edited, and it would have been just as enjoyable.  The fine musical score is provided by Elmer Bernstein.  Sturges himself didn’t think this was among his best work. It was shot in 70mm widescreen format, and looks good on large modern televisions.

For Burt Lancaster in another comedic western role, see him as mountain man Joe Bass in The Scalphunters (1968), with Ossie Davis.