This was director Sam Peckinpah’s second movie, one of the two that are counted his very greatest, and one of the first notable passing-of-the-old-west movies.  As aging former lawman Steve Judd (Joel McCrea) rides into a town in California’s Sierra Nevada at the turn of the century, he hears cheers from the citizenry lining the streets.  He sees no one else and figures the cheers must be appreciation for him and his earlier career, and he tips his hat.  Then he is rudely shooed out of the way by a policeman, as a camel and horse race around a corner and toward a finish line.  The cheers were for the racers.

In fact, Judd and his career are largely forgotten.  He’s been getting menial work where he can to survive, but time and the west itself have passed him by.  He finds old friend and fellow former lawman Gil Westrum (Randolph Scott) working a shooting booth at a carnival, billed as the Oregon Kid.  Judd has been lured here by the offer of a good-paying job escorting $250,000 in gold down from a remote mining camp to the bank in town.

It turns out that expectations are too high on both sides of the deal.  The father and son who run the bank (Percy Helton and Byron Foulger, very good in bit parts) were unaware of how old Judd now is; and in fact there’s only about $20,000 in gold.  Judd is to get $20 a day, plus another $20 to be split between Westrum and his headstrong and girl-crazy young partner Heck Longtree (Ron Starr).

Contemplating the limited rewards of a life spent in law enforcement.

The dialogue between Judd and Westrum as they ride the high country toward the camp of Coarse Gold has several recurring themes:  lost loves and disappointments of the past, the way that a career in law was too dangerous and didn’t pay enough to get married and have a family, and an easy way with scripture.  They come to a farm, where they seek lodging for the night with Joshua Knudsen (R.G. Armstrong), a man even more given to spouting scripture than they are.  His daughter Elsa (the luminous young Mariette Hartley) is anxious to experience more of life than is available on her mountain farm with an oppressive father.  She goes so far as to encourage Heck’s attentions.  It turns out she fancies herself engaged to a miner in Coarse Gold, and she sneaks off to follow Judd’s small band when they leave the next day.  And it also turns out that the gold isn’t all that’s coarse in the mining camp.

Her miner is Billy Hammond (James Drury in his pre-Virginian days), the most presentable of the five despicable Hammond brothers (John Anderson, Warren Oates, L.Q. Jones and John Chandler Davis are the others).  Longtree deposits Elsa with the Hammonds with considerable misgivings, while Judd and Westrum conduct their business in the camp, where the people are as coarse as what they mine.  That night Elsa, Billy and the Hammonds go to Kate’s Place for her to be wed to Billy by the inebriated Judge Tolliver (Edgar Buchanan).  Immediately after the wedding, she discovers that marriage with a Hammond is not at all what she was expecting.  Judd rescues her, and the small band retreats from Coarse Gold amid threats from the Hammonds. 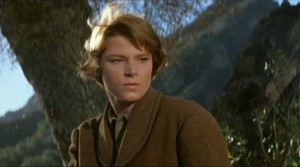 Mariette Hartley in her first movie.

Indeed, they are bushwhacked by the Hammonds on the trail while Judd is discovering that Westrum plans to make off with the gold himself.  Heck and Judd fight off the Hammonds, killing two of them (Sylvus, played by L.Q. Jones, and Jimmy, played by John Chandler Davis).  As they approach the Knudsen farm, they find that the three remaining Hammonds have made it there before them and killed Joshua.  Heck and Judd both take bullets, and, after a standoff, Judd and Westrum decide to take on the Hammonds “straight on, just like always.”  It’s a powerful ending.

This movie contains one of the great lines in a western, a line that a surprising number of people know.  As the aging Steve Judd and Gil Westrum talk about what they’ve learned and where to go from here in their lives, Steve says, “All I want is to enter my house justified.”  He doesn’t explain more than that, but it resonates.  It’s what gets him to the end of movie, and we know that he does indeed enter his house justified—whatever that means.  (See Luke 18:14 in the New Testament, where the line comes at the end of a parable on the difference between conventional righteousness and the real thing.  The line was apparently added by director Peckinpah from something he’d heard his father say.)

This was not a pretentious or large-budget film when it was made.  Peckinpah was known mostly for directing television westerns (Have Gun Will Travel, Gunsmoke, The Rifleman and his own brief series, The Westerner).  But he makes the elements come together here superbly to form one of the great westerns.  First is the casting:  Joel McCrea at 57 and Randolph Scott at 64 were near or even past retirement, but one can’t imagine any one else in their roles.  Scott has much more dialogue than we’re used to hearing from him, and he handles it with considerable dry humor.  The supporting characters are well-written and well differentiated.  The screenplay was written by N.B. Stone Jr., known mostly for television writing but also for the excellent Man With a Gun.  Its Old Testament flavor and dry humor play very well with the two principal characters.  Stone even has the drunk Judge Tolliver stand in a whorehouse and give a rather touching speech on marriage.

Elsa:  “My father says there’s only right and wrong–good and evil.  Nothing in between.  It isn’t that simple, is it?

Lucien Ballard was the cinematographer, and his work was remarkable, as usual.  Note the use of the actual Sierras in the Inyo National Forest, and the way that bits of the story are told by means other than dialogue or the faces of the actors, as when Westrum makes a move for the gold and Judd catches him at it.  That part of the story is told with the camera just showing legs and feet, and it works very well.  And in the final shot, the dying Judd is shown from a very low angle against the looming mountains, almost as if he were one of them.  He slowly rolls over and out of the frame, and the camera doesn’t follow him.  It’s like watching a mountain crumble.

This was Randolph Scott’s last film and Mariette Hartley’s first; it was also Joel McCrea’s last film of any consequence.  In some ways, this is a throwback to the kinds of roles Scott played in the early 1940s, when his character was often trying to decide whether to be a good guy or an unusually ethical bad guy (Western Union, Virginia City).  Gil Westrum and his choices are central to the movie.  The one cast member who is less than optimal is Ron Starr as Heck Longtree.  He’s irritating for the first half of the movie, but he is convincing enough in making his character’s changes as the movie progresses.  It’s just that he’s working here with giants (Scott and McCrea) in the principal roles and with extraordinary character actors.  Hartley outclasses him, too.

The high country of the title, in the end, is not just the magnificent mountain scenery in which this film takes place.  It’s also the moral ground on which the unyielding Steve Judd makes his stand.  And perhaps it’s the place he’ll meet Gil Westrum in a while.  Westrum’s last line, spoken to Judd, is “I’ll see you later,” which seems to bear much more meaning than it usually would.  Hartley said that after the last scene with McCrea, she turned to Scott to find him with tears streaming down his face.  For many, this and not The Wild Bunch is Peckinpah’s masterpiece. 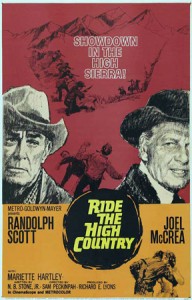 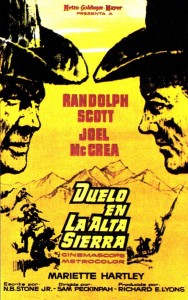 Ride the High Country was shot in just 26 days; Peckinpah was not yet as self-indulgent as he would quickly become.  As with Shane, the studio had no great confidence in this mid-budget western and did not promote it heavily.  Screenwriter William Goldman said he spoke to an MGM executive at the time who said the film had tested strongly, but they felt the film “didn’t cost enough to be that good.”  According to MGM records, the film made a loss of $160,000.  Notwithstanding the lack of promotion, the film was named by Newsweek and Film Quarterly as the best film of 1962; it won first prize at the Venice Film Festival; and it received the grand prize at the Brussels Film Festival (beating Fellini’s 8 ½).  Europeans loved it before American film audiences recognized what a classic this is.

A word of warning:  This has been shown on Encore’s Westerns channel, but the print they’re showing is a bad one that gives no no sense of how magnificent the cinematography of Lucien Ballard is or of the clear beauty of the panoramic vistas in the mountains.  Nor do they show it in widescreen, which is how it was shot and how it looks best.  It’s amazing how much these problems reduce the enjoyment of watching a great movie.  Look for a good DVD or Netflix instead.  This is one classic that is crying out for a Criterion Collection blu-ray treatment.