Grizzled bounty hunter Morgan Hickman (Henry Fonda) meets green sheriff Ben Owens (Tony Perkins in one of his first roles):  “How long you had that badge?”  “Since Sheriff Parker…uh, got killed.”  “Nobody else wanted it, huh?  How come they picked you?”  “I’m only temporary.”  “You’re more temporary than you think.”

The title is a generic sort for a western featuring a lawman; in fact, a short story with this name was made into the classic High Noon.  In this case Hickman has come to town to collect the reward on an outlaw he brings in, dead and draped over his pack horse, only to find himself despised by the respectable townspeople.  The inexperienced sheriff is just finding his way in a difficult job and tells Hickman he’ll have to wait for his money until he gets confirmation from the party offering the reward.  This means Hickman will have to spend at least several days in the hostile town until he can get paid.  The town bully and livery stable owner is Bart Bogardus (played by experienced villain Neville Brand, who was said to be the fourth most-decorated American soldier during World War II); Bogardus thinks he’d be a better sheriff than Owens.  Hickman bails Owens out of a difficult situation with Bogardus and unintentionally becomes the young sheriff’s mentor. 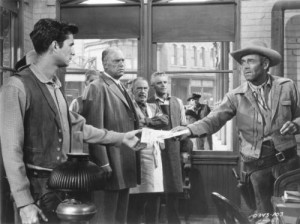 Meanwhile, the hotel won’t rent Hickman a room, and he finds accommodations with young widow Nona Mayfield (Betsy Palmer) and her half-Indian son.  In addition to making a place for himself as sheriff, Owens is also trying to get Millie Parker (Mary Webster) to marry him.  But she’s the daughter of the previous (and now dead) sheriff, and she won’t marry him unless he takes off the tin star.  The beloved town doctor (John McIntire) is killed, and Owens loses control of his posse to Bogardus.  It becomes a mob.  Meanwhile, Hickman and Owens find and capture the killers, but may not be able to hold them against Bogardus and the mob.  As Hickman and Owens become better friends, Hickman reveals that he had been a lawman in Kansas when his own family needed help, and the townspeople he thought were his friends wouldn’t provide the assistance he needed.  He now has few illusions about the relationships between townspeople and those they hire to protect them, and he thinks they ask too much while providing too little in return. 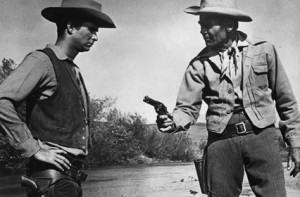 In the final confrontation between Owens and Bogardus, Hickman puts on the star again in support of Owens, but Owens, armed with what he’s learned from Hickman, is the one who has to deal with the situation.  And at the end Hickman takes off with the young widow and her son to find another town that wants somebody to wear a star. 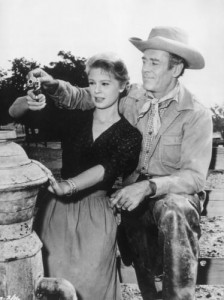 This is one of a number of westerns from the 1950s that explored social issues, especially one of those concerned with a sense of community and how much townspeople owe to those who enforce the law against the lawless.  (Compare it with High Noon, Man With the Gun, At Gunpoint, 3:10 to Yuma and Rio Bravo, for example.)  The townspeople usually come off badly in such situations, so much so that it has become a cliché (see Support Your Local Sheriff, for example, which exploits that cliche to comic effect).

The cast here is appealing, with a good relationship between American everyman Fonda and the young Tony Perkins.  Palmer is attractive and straightforward as Fonda’s romantic interest.  John McIntire is his usual avuncular self as the town doctor, but he’s basically the same character as Walter Brennan in At Gunpoint.  McIntire was a Mann favorite, and shows up more colorfully in Winchester ’73 and The Far Country, too.  Villains Brand and Van Cleef do exactly what they’re supposed to do. 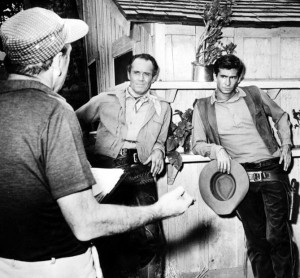 Anthony Mann directs Fonda and Perkins in a scene.

This is the better one of the two good westerns directed by Anthony Mann that don’t feature James Stewart.  (The other is Man of the West with Gary Cooper.)  Mann was more interested in psychological and social issues than some directors of westerns in the 1950s, but he knew what he was doing.  This is in black and white, at a time when most movies with ambitions (even westerns) were in color.  But it doesn’t suffer for all of that.

For another movie featuring Fonda as an experienced ex-lawman helping a younger and greener peace officer, see Warlock, made a couple of years later.