Shane:  “A gun is a tool, Marian; no better or no worse than any other tool:  an axe, a shovel or anything.  A gun is as good or as bad as the man using it.  Remember that.”

Filmed in 1951, Shane sat quietly on the shelf at Paramount for two years before its release in 1953.  There are a couple of versions of the reasons for the delay.  In one version, director George Stevens simply dithered over the editing of the movie for the interim.  But studios have ways of pressuring directors to get on with it if they really want to release a film.  The other version has it that Paramount didn’t really think they had anything interesting in this property.  Alan Ladd was not quite as big a star as he had been ten years earlier (as the killer Raven in This Gun for Hire, for example), and Jean Arthur, coaxed out of semi-retirement for what would be her final film role, was thought to be over the hill.  When Shane was finally released, though, it turned out to be a big hit and received four Oscar nominations.  And it is one of the greatest westerns ever made. 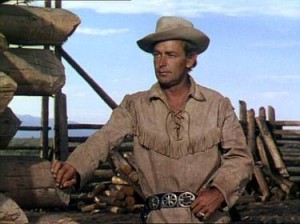 This movie tells one of the archetypal western stories, one which had been used before and many times since.  Shane (played by Ladd) is the quintessential Mysterious Stranger.  The Stranger rides into a community in conflict, sides with the underdog, uses his talent for violence to balance the odds, and, when he wins the conflict, finds that there is now no place for him in the community.

The film wastes little time getting into the story.  In the opening sequence, Shane rides up to the Starrett homestead in Wyoming’s Jackson Hole in the shadow of the magnificent Grand Tetons.  He’s wearing nicely tailored buckskins and and a showy gunbelt.  It’s clear he can use the gun, although he’s not overbearing about it.  While Shane gets a drink of water, Joe Starrett (Van Heflin) is accosted by several other riders led by local cattle baron Rufus Ryker (Emile Meyer).  Ryker and his men ride through Starrett’s garden to warn him off the land, which in Ryker’s view is his free range.  The sodbusters have no business fencing it off.  Shane quietly backs Starrett up and is invited by Starrett to stay.  Starrett’s son Joey (Brandon de Wilde) develops a fascination with Shane.  So does Joey’s mother Marian (Jean Arthur), although more quietly.  When Marian tells Joey not to become too attached to Shane, we know she’s speaking to herself, too.  The relationship develops but is left carefully undefined.

The dispute between cattle baron and homesteaders escalates, and the film develops the homesteaders as individual characters, including Stonewall Torrey (Elisha Cook, Jr., in one of his most memorable roles) and Fred Lewis (Edgar Buchanan).  Starrett and Shane fight Ryker and several of his men to a standstill in the local saloon, and Ryker decides he needs a real gunfighter.  So he sends to Cheyenne for Jack Wilson (Jack Palance). 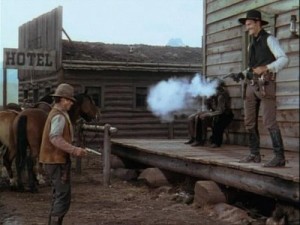 Wilson, cold and menacing in black, guns down Torrey in a muddy street in particularly ruthless fashion, and it’s only a matter of time until somebody more competent has to deal with Wilson.  Marian Starrett hates guns and fighting, but it’s clear there will be more of both.  Joe Starrett, as apparent leader of the homesteaders, feels he has to take on the fighting role, too, although it’s obvious Shane could do it better, especially when it comes to guns.  And Starrett realizes that if something happens to him, the attraction between Shane and Marian would mean she wouldn’t be left defenseless.  As Starrett starts for town to have it out with Ryker, Shane, now dressed in his buckskins and gunbelt again, stops him.  They fight, and Shane wins by knocking Starrett out with his gun—cheating, in effect.  As he rides toward town and the final confrontation with Wilson and Ryker, Joey follows on foot.  The showdown plays out as it should.  Shane points out to Ryker that his free range days are over, just as Shane’s skill with a gun is now becoming anachronistic.  Having made the area safe for civilization, Shane rides off into the mountains, with Joey yelling, “Shane!  Come back, Shane!”  But Shane knows he can’t go back, and he takes his mysteriousness with him.  We still don’t know his other name or much of his history—only what we were shown when he was in this valley. 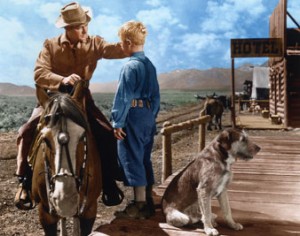 The loner takes his leave.

It’s surprising that this turned out to be such an archetypal western.  The director, George Stevens, was top-notch but not known for westerns—more for Ginger Rogers and Fred Astaire (Swing Time) and perhaps later epics like Giant.  And this is a meticulously directed movie.  In the opening shot, for example, a deer being watched by Joey raises its head, and its antlers perfectly frame the approaching rider—Shane.  Scenes are shot from many angles and carefully stitched together in the editing room.   Frequent low camera angles (a) encourage us to see the action as if through Joey’s eyes, (b) emphasize the majesty of the mountains and the sky, and (c) mask the fact that Ladd was quite short, only five feet six inches tall.

It works brilliantly, but if you watch the movie again, some elements start to seem less than perfect.  The seams in the moviemaking begin to show.  Brandon de Wilde’s Joey becomes more irritating, although he does behave more or less like a real child.  The pacing of the movie, with all the development of the not-so-interesting homesteader bonding, seems to drag a little in places.  In the physical fight scenes, it becomes more apparent that they’re shot and edited to disguise the fact that Van Heflin, for example, is much larger than Alan Ladd, and they’re less persuasive on a second or third viewing.  It seems unlikely that Joey could run all the way to town after the riding Shane in time to witness the final shootout.  After that final showdown, when Shane twirls his gun and pops it in his holster, you become aware that the shot is only of his midsection and gun arm, and you wonder if it’s a double doing that expert twirling.  (It is–gunsmith/stuntman Rodd Redwing.)  Still, it’s great movie-making. 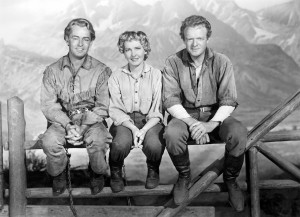 The casting shouldn’t work as well as it does.  Although he was in several westerns, Alan Ladd still seems more like an urban character in appearance and speech.  The golden hair, the classic good looks, the low-key, reserved approach to acting, the rich voice—all work well for the mysterious Shane in this movie.  Jean Arthur seems urban, too, although she too was in a couple of other westerns (The Plainsman, Arizona) earlier in her career.  Arthur was in her fifties when this was made, significantly older than her two male co-stars and ten years older than Emile Meyer, who plays the seemingly aging Ryker.  The age differences aren’t obvious, but something strange was going on with Arthur’s hair in this movie; she seems to have been wearing wigs constantly, and not all that persuasively.  Van Heflin plays the kind of role for which he is best known, the solid and reliable but perhaps not so exciting husband.  And he’s excellent here, with a lot more lines than the quiet Shane.  (First choice for the Starrett role was said to be William Holden, who would have been good, too.)  Jack Palance doesn’t have much screen time, but his menace has become iconic.  Elisha Cook, Jr. and Ben Johnson (as Chris Calloway, a Ryker cowhand who has a change of conscience) are very good in minor roles, too.

Ladd was reported to have had trouble with guns and Palance was new to horses.  The scene where Shane is showing Joey how to shoot is said to have required 116 takes, and Palance’s mounting up after taking a drink of water is said to actually be a dismount played in reverse.  None of it matters.  This movie is a classic. 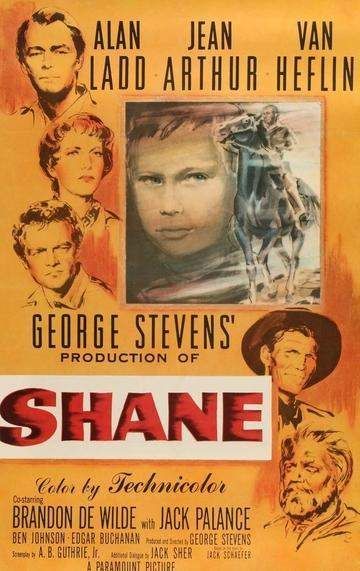 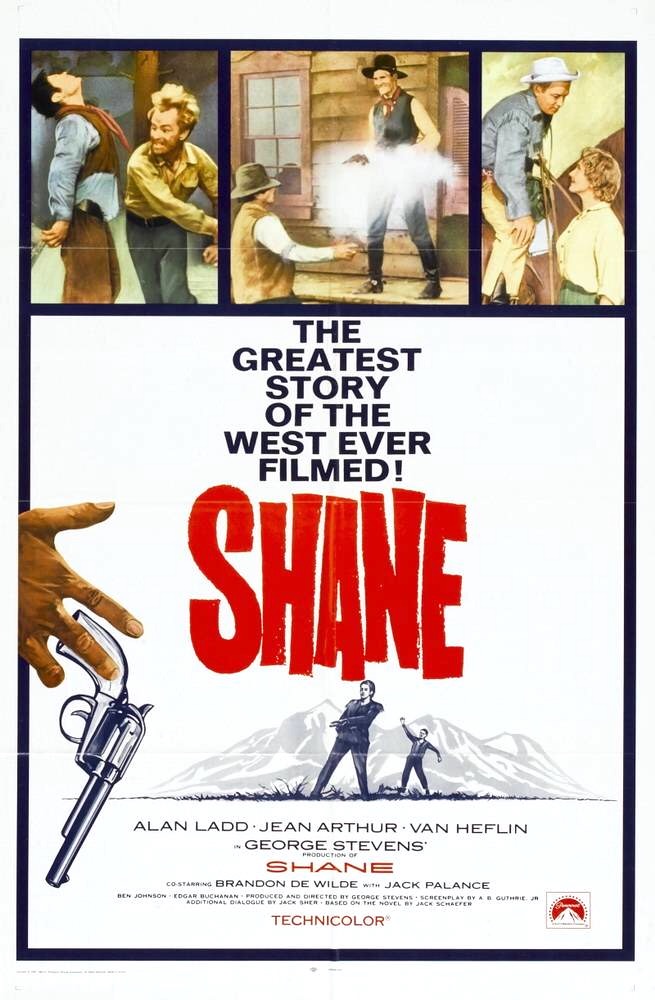 In the wake of Shane’s box office success, it received several Academy Award nominations, including Best Picture and Best Director.  For Best Supporting Actor, both de Wilde and Palance were nominated, although, perhaps surprisingly, Ladd was not nominated in the Best Actor category.  Novice screenwriter A.B. Guthrie, Jr., received a Best Screenplay nomination for his script based on a novel by Jack Schaefer (also the author of Monte Walsh).  The only win, however, was by Loyal Griggs for Best Cinematography, which he richly deserved.  Shot on location in Jackson Hole, the film makes the best use ever of the majestic Tetons on the Wyoming-Idaho border.  (A few years later, director Delmer Daves would also make particularly effective use of Jackson Hole in the underrated Jubal.)  The score by Victor Young is good, too.  The success of Shane boosted Ladd’s career, as High Noon had done for the aging Gary Cooper the previous year.

Van Heflin plays a very similar character in Delmer Daves’ excellent 3:10 to Yuma.  About 35 years later, Clint Eastwood remade this story with himself as a more overtly mysterious stranger in Pale Rider.  It too was an excellent western—it just didn’t quite have the resonance of this original version.  For another good Alan Ladd western, see him in Branded or Saskatchewan.  For a slightly older Brandon de Wilde in another western, see him with James Stewart and Audie Murphy in Night Passage. 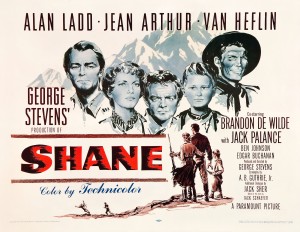 One of several posters.

Note:  On the movie’s soundtrack, the sound of shots was punched up by Stevens in the editing of the film, so as to cause the shots to be more shocking when those sounds occur.  This technique was copied in Bonnie and Clyde about 14 years later.  Warren Beatty, a producer as well as a star of Bonnie and Clyde, tells a story of talking with a projectionist in London who unknowingly pronounced Bonnie the film with the worst-mixed sound since Shane.  The projectionist thought it was unintentional and compensated by reducing the sound level for the shots.  [See comments by Beatty in a documentary on George Stevens, shown on TCM.]  For a more recent example of playing with the sound of shots for greater effect, watch Open Range.