John Wayne plays Hondo Lane, an ill-tempered part-Indian army scout in Arizona territory in 1870.  This movie doesn’t have as high a profile as some of the Wayne westerns of the late 1940s and early 1950s (Red River, The Searchers), but Hondo Lane is a quintessential Wayne character.

So why doesn’t it have a higher profile?  There are at least three major reasons:  (1)  The story isn’t as epic in nature as some others.  (2)  The rights are owned by Wayne’s production company, Batjac, and Batjac kept it largely out of circulation for a few decades.  (3)  It was made during the brief 3D fad of the early 1950s and bears some of the hallmarks of that specialized kind of moviemaking.  Along with Alfred Hitchcock’s Dial M for Murder, it might be the best 3D movie made during that period.  It is certainly the best movie made from a story by the best-selling western author Louis L’Amour, although it doesn’t have much good competition for that title. 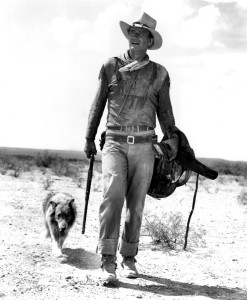 A stranger from the desert, accompanied by a feral dog.

As the movie opens, army scout and dispatch rider Hondo Lane walks up to an isolated Arizona ranch, looking somewhat the worse for wear, carrying saddlebags and a rifle and followed by a scruffy-looking feral dog, Sam.  Lane’s horse was killed when he was attacked by Apaches a few days earlier, and he’s been on foot ever since.  At the ranch he finds Angie Lowe (Geraldine Page) and her son Johnny (Lee Aaker).  She says her husband Ed is up in the hills rounding up strays, but the place doesn’t show much sign of a man’s upkeep for the past several months.  Lane buys a wild horse from her, tames it and does some other tasks to earn his keep.  He develops the beginnings of a relationship with Angie and Johnny, and reveals that he once lived among the Mescalero Apaches and was married to one of them.  Lane tries to talk Angie into coming back to the military post and safety, but her family has lived for a long time at the ranch originally built by her father.  They have always had decent relations with the Chiricauhua Apaches in the area, now led by Vittorio (Michael Pate), and Angie insists on staying.

Lane returns to the army post with the tattered pennant of C Troop that he has recovered from an Apache.  He has a couple of run-ins with an unpleasant loudmouth who turns out to be named Lowe (Leo Gordon, who was just getting started in a career as a bad guy and thug).  Yes, he’s Angie’s husband, who has abandoned his family on the isolated ranch in Apache country.  As Lane leads a pack horse back toward the Lowe ranch, Lowe and a confederate follow at a distance, planning to attack and rob Lane when they find him in a convenient spot.  When they do attack, a band of Apache warriors attacks the three white men.  They get Lowe’s friend; Lane is forced to shoot Lowe and then tries to outrun the Apaches.  He’s not successful and is captured by Silva (Rodolfo Acosta), one of Vittorio’s nastier subchiefs. 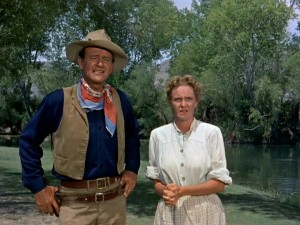 After Lane’s departure from the Lowe ranch, Vittorio shows up with his warriors in a less than friendly mood.  However, Vittorio is taken with Johnny’s spirit in his youthful attempts to defend his mother, and he adopts the boy as a blood brother.  Now that Lane is a captive of the Apaches, they begin to torture him until they discover in his possession a tintype of Johnny that Lane had taken from Lowe’s body.  He is given the right to single combat against Silva.  He wins after being wounded, but declines to kill Silva.  Vittorio deposits him at the Lowe ranch, where Angie lies and confirms to the chief that Lane is her husband.  This saves her from having to take an Apache husband.  And she’s starting to wish that the lie were true.

Lane gives Angie the tintype and tells her that he got it from Lowe’s body.  There follows an interlude in which Lane bonds with the boy and his mother.  Vittorio shows up unexpectedly to extract from Lane a promise that he won’t help the soldiers and will mislead them about Vittorio’s whereabouts.  Lane refuses to lie to the soldiers, knowing that the Indians hate lies. 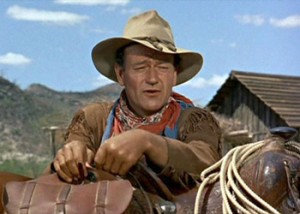 When they do show up, the soldiers are led by Lt. McKay, a recent West Point graduate who won’t listen to the voice of experience, as represented by Lane and his fellow scout Buffalo Baker (Ward Bond).  In a subsequent altercation with the Apaches, McKay is badly wounded and Vittorio is killed.  With Vittorio dead, Lane knows he and his new family are now in greater danger from the Apaches, and from white men who know that Lane killed Lowe.  There is a stirring resolution with a cavalry-Apache battle on the run.  Observing the departing Indians at the end, Lane notes, “End of a way of life.  Too bad.  It was a good way.”

Hondo may not be all that different from other John Wayne western characters, but he’s not identical, either.  For one thing, there’s Hondo’s irascibility:  “No wonder the Apaches call him Enverrado.  It means bad-tempered.”  He’s given to saying “A man oughta do what he thinks is best” just when somebody’s about to do something blatantly wrong or stupid.  Note the battered hat worn by Hondo throughout the movie; it’s the same one worn by the Ringo Kid in Stagecoach, Capt. Nathan Brittles in She Wore a Yellow Ribbon, and Sheriff John T. Chance in Rio Bravo.  It was honorably retired after Rio Bravo in 1959 after 20 years of hard use. 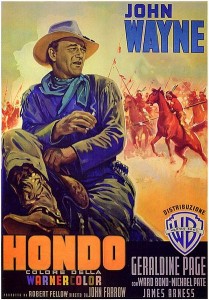 The cast is excellent, and aside from the central role of Hondo Lane, the young Geraldine Page really makes the movie as slightly prissy pioneer woman Angie Lowe.  Previously known only for her work on the New York stage, she got an Oscar nomination for Best Supporting Actress for her work here.  (A political liberal, she was reportedly horrified at the right-wing views of Wayne, Bond, Arness and director Farrow.)  Ward Bond, one of the usual John Wayne-John Ford suspects, is also superb as a slightly rougher than usual variation of the rough-hewn frontier character he normally played.  Australian actor Michael Pate is credible as Vittorio, more than you’d expect, and he shows up in other movies (McLintock!, for example) as an Indian.  The young and blond James Arness plays yet another scout, this one of a morally dubious nature.  The overconfident recent West Point graduate, Lt. McKay (Tom Irish), might have stepped out of John Ford’s cavalry trilogy.  And Paul Fix as the post commander is good in a small part.  Sam, Hondo’s dog, is a good character, very similar to “Dog” in Big Jake.

There are some remaining traces of the movie’s 3D origins, but they’re not too distracting.  They include the garish titles, a few lunges at the camera during the knife fight and the battle sequences and a couple of strange camera angles.  There is an Intermission card, needed for this relatively short movie so that film could be changed in both projection cameras at the same time. 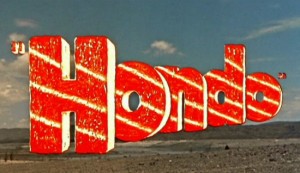 The movie is directed in a thoroughly professional manner by John Farrow, although there are stories that Farrow was restrained some by Wayne.  The movie’s final sequences (including the cavalry-Apache battle) were directed by John Ford when Farrow had to leave before the film was quite finished.  The screenplay is by James Edward Grant, whose brand of terse dialogue was particularly congenial to Wayne.  It was filmed on location in the Mexican desert, in Camargo, Chihuahua, during the summer months, which no doubt accounts for the authentic-looking dust and sweat.  At less than 90 minutes, it’s pretty tight story-telling.

By the time the film was released in late 1953, the 3D fad had already passed, and Hondo was mostly seen in a more normal format.  But it was a hit.  Based the short story “A Gift of Cochise,” author L’Amour reworked it into a novel that sold 3,000,000 copies, the first with his real name attached.  It started him on the road to best-sellerdom, although that mostly arrived in the 1970s and 1980s.

Note that Wayne recycled the names “Lane” and “Mrs. Lowe” twenty years later in one of his last movies, The Train Robbers.  It’s not one of his better films, though, unlike Hondo.