A perennial fixture on the list of greatest westerns, High Noon is a creature of its time, an apparent Hollywood reaction to the era of McCarthyism.  For all of that, it’s also excellent story-telling with terrific actors and a claustrophobic feel as the designated hour approaches. 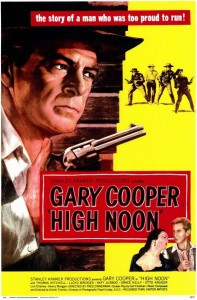 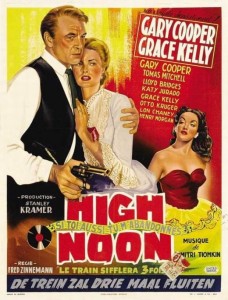 Part of the tension is caused by the action of the film taking place almost in real time.  Will Kane (Gary Cooper) is the aging town marshal of Hadleyville, who is now retiring from those responsibilities as the movie opens.  The primary reason for that well-deserved retirement is his brand new wife, the young anti-violence Quaker Amy Fowler (Grace Kelly, looking elegant and cool in her first starring role).  However, Kane’s past threatens to catch up with him   He arrested Frank Miller some years ago and sent him to prison.  Now Miller’s getting out, and he wants to have it out with Kane.  Miller has henchmen who’ve remained attached to him during his incarceration; the citizenry of Kane’s town, who have benefited from his service and past courage, have little similar faithfulness.

The title High Noon refers to Miller’s impending arrival on a train.  We know we are in good hands from the opening shot, as Jack Colby (Lee Van Cleef in his movie debut) sits smoking on a rock.  The Oscar-winning theme song “Do Not Forsake Me, Oh My Darlin’” starts at the same time, its rhythms evoking the sound of a railroad locomotive.  The song Tex Ritter’s singing provides a plot synopsis as the titles and credits roll, and Colby watches as Ben Miller (Sheb Wooley) rides toward him. They are then joined by veteran screen heavy Robert Wilke as Jim Pierce, and the three ride off together toward Hadleyville.  They are Frank Miller’s hard-eyed henchmen.  They ride into town past the church, and a Mexican woman crosses herself as she watches them. 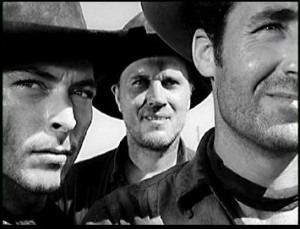 Meanwhile, Will Kane and Amy Fowler are being married on this Sunday morning.  As the ceremony ends, Kane turns in his star and hangs up his gun, since he has now married a Quaker.  He is then given a telegram telling him that Frank Miller has been pardoned and is heading his way.  Will the marriage hold up under the collision of principles that is about to take place, not to mention the apparent 30-year age difference between Kane and Fowler? 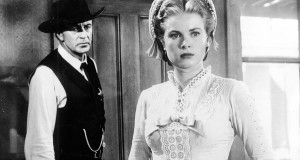 Just married, and already they have a troubled relationship.

Will Kane tries to leave town, but decides he has to come back when he realizes his replacement as marshal won’t be in town until the next day.  “I’m the same man whether I wear this [star] or not.”  He can’t walk away from what he sees as his responsibility, which is not limited by formalities.  And if he stays in town, he figures he can get backup from his long-time friends there.  Amy’s not so sure of any of this; she argues for Will to leave with her, partly because of her pacifist religious principles and hatred of violence and guns.  She declines to wait in the hotel for the next hour or so to see whether she’s going to be a widow before she’s even had a chance at marriage.  She buys a ticket for St. Louis, planning to leave on the same train on which Miller will arrive.

Kane’s hopes for support fade by the minute.  Judge Mettrick (Otto Kruger) who originally sentenced Miller to hang can’t leave town fast enough.  Young Deputy Marshal Harvey Pell (Lloyd Bridges) is angry at being passed over for promotion to the top job, and tosses in his badge.  He figures Kane won’t support him in wanting to be the marshal because of Pell’s current relationship with Helen Ramirez, Kane’s former mistress and the most prominent business person in town (played by the darkly beautiful Katy Jurado, excellent in her first U.S. movie).  Ramirez sells her businesses to leave town; she has history with both Kane and Miller, in addition to her current relationship with Pell.  She understands Kane better than his new wife does in some ways; Amy mistakenly thinks a lingering affection for Ramirez is the reason Kane won’t leave. 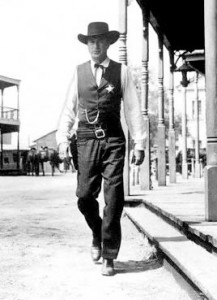 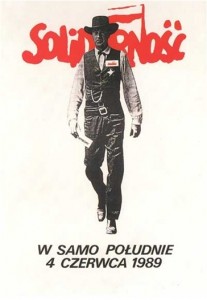 An iconic image with a lot of resonance in different circumstances.

Some in town figure that business was better when Frank Miller was around.  Some just don’t like Kane.  Some, like Selectman Sam Fuller (Harry Morgan) hide from him.  Kane approaches the people in church, many of whom have their own reasons not to take a role in the impending clash.  Kane hasn’t been much of a churchgoer himself.  Mayor Jonas Henderson (played by Stagecoach’s Thomas Mitchell) wants him to leave town.  The former marshal, Kane’s mentor, is too tired and too crippled with arthritis to help.  Harvey Pell, tired of Ramirez and everybody else thinking he isn’t up to Kane’s standards, picks a last-minute fight with Kane in the livery stable.   In the end, Kane has only a one-eyed drunk and a 14-year-old boy who’re willing to stand with him.  It’s really just Kane against the four gunmen. 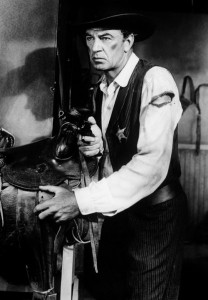 Kane (Gary Cooper) is on his own against Frank Miller and three of his gang.

During the shootout, Kane does get some help from an unexpected quarter.  In the famous last shot, he tosses his marshal’s badge into the dirt at the feet of those who’ve come to congratulate him after his success in the shootout, and he rides out of town forever in a two-set carriage.

The cast is brilliant, although some of these actors were quite early in what became distinguished careers.  50-year-old Gary Cooper was thought to be past his prime when the film was made, and this performance reinvigorated his career.  Grace Kelly doesn’t quite balance him, but she’s fine in her first starring role.  (She was only 21 at the time.)  Katy Jurado gives a smolderingly good performance, and her part is not written as bloodlessly as Kelly’s.  The many small roles (including Howland Chamberlain as the hotel clerk who doesn’t like Kane) are excellently played.  Ian Macdonald might be less effective as Frank Miller, but he isn’t actually on screen much, and he’s fine.  Lon Chaney, who plays Kane’s retired mentor, was actually five years younger than Cooper.  Jack Elam appears uncredited in a couple of shots as the locked-up town drunk.  Cooper might have been on the downhill slope of his career, but a number of good acting careers were just getting started in this movie.

The film was nominated for seven Oscars and won four.  It lost the Best Picture Oscar to The Greatest Show on Earth, generally regarded as one of the weakest winners ever of that award.  Cooper won his second Best Actor Oscar for this performance.  (The first was for 1941’s Sergeant York.)  He remained a bankable star throughout the decade, making several more notable westerns (Vera Cruz, Man of the West, The Hanging Tree, They Came to Cordura).  The other Oscars this movie received were for Best Editing, Best Original Song (the first such Oscar winner from a non-musical) and Best Score for Dimitri Tiomkin’s music.  Indeed, the Oscar-winning theme song started a new fashion for sung themes in westerns, frequently used badly and intrusively (see, for example, Rancho Notorious, Trooper Hook and the original 3:10 to Yuma).

Visually, the movie is quite effective, although it was shot mostly on the Columbia back lot in Burbank.  The editing is superb, with frequent images of clocks and pendulums, and low-angle shots of railroad tracks stretching off to the horizon.  The editing heightens tension without becoming too repetitive, a delicate line.  The film is intentionally shot in black and white, not color, and it doesn’t feature the huge western skies and landscapes so effectively used by John Ford, George Stevens, Howard Hawks and others. 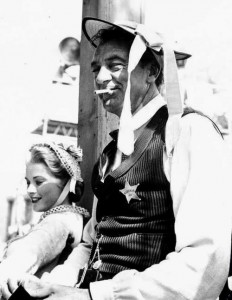 Cooper has fun with wardrobe tests during filming.

Fred Zinnemann, an Austrian of Jewish descent who had grown up on the stories of German author Karl May, was an unusual choice to direct a western.  He and producer Stanley Kramer did not particularly intend to make an allegory for the McCarthy hearings then at their height, but screenwriter Carl Foreman and cinematographer Floyd Crosby did.  Foreman was blacklisted and fled to England before the film was finished.

Somehow High Noon manages to transcend the trap of being stuck in its time.  To the extent it could be said to have underlying political themes, it’s never so overbearing with them that it can’t be seen in a variety of ways.  Right-wing John Wayne and the Soviet news agency Pravda were equally offended by it.  Regardless of what Foreman, Kramer and Zinnemann may have been thinking at the time (and they weren’t thinking the same thing), it represents the most effective presentation of a theme common in 1950s and 1960s westerns:  the role of ordinary citizens in defending civilization and their uneasy relationships with those who use violence and run risks in upholding the law for them.  (See, for example, such movies as The Tin Star, Warlock, The Fastest Gun Alive, A Man Alone, Lawman, etc.—even the parody Support Your Local Sheriff.)  Not everyone agreed with High Noon’s take on this issue, either.  Howard Hawks said that he made 1959’s Rio Bravo partly as a counter-statement to High Noon, and it works marvelously, too.  Dave Kehr refers to “Cooper playing an inflated archetype — the Man of the West — rather than a character” in this, “his most overrated film, Fred Zinnemann’s didactic political fable High Noon (1952).”  For more background on the film, see Glenn Frankel’s High Noon:  The Hollywood Blacklist and the Making of an American Classic (2017).

Another character who throws his badge in the dirt after having saved his community:  Clint Eastwood’s Dirty Harry twenty years later, making a very different statement than writer Foreman, at least, intended for this movie.

William Faulkner, a great American writer who had a substantial history in writing for the movies, said that High Noon was one of his favorite films. “There’s all you need for a good story:  a man doin’ something he has to do, against himself and against his environment.  Not courage, necessarily.”