This is the last and the least critically-regarded of the John Ford cavalry trilogy.  The story goes that Ford didn’t intend to make this film and only did so when the RKO studio head Herbert K. Yates told him they’d let him make The Quiet Man on location in Ireland if he made another cavalry picture with John Wayne first.  It had only half the budget of Fort Apache, the first in the trilogy, and according to Harry Carey, Jr., Ford and the rest of the crew treated the shooting as something of a vacation, although Ford was always responsible enough to get the film done if he wasn’t drinking too heavily. 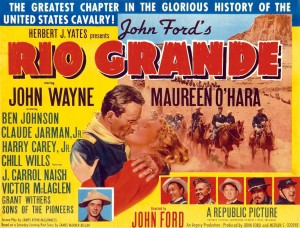 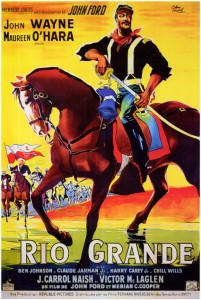 It’s also the first of five movies (with The Quiet Man, The Wings of Eagles, McLintock!, and Big Jake) pairing Wayne and Maureen O’Hara as romantic partners, an enduring screen couple.  The story for this film seems more hastily put together than those for its two predecessors in the series.  There is some confusion surrounding the individual movies in the trilogy, since names recur and the same actors show up in each film without any explicit connection.  Even Wayne here has the same name as his character in Fort Apache, Kirby York, although it’s spelled York in Fort Apache and Yorke here.  As in She Wore a Yellow Ribbon, Ben Johnson is a trooper named Tyree, although apparently not the same one.  Victor McLaglen is Sergeant Quincannon again, and he may or may not be the same one.  Harry Carey, Jr., is again a young soldier, although this time he’s an enlisted man from Texas named Daniel Boone.  In any event, he’s never the one that gets the girl if there is one to get.  It all leads to a sense of elements and names from the previous two movies by the same director being thrown into a hastily-crafted story here, with more overt sentimentality and the Sons of the Pioneers. 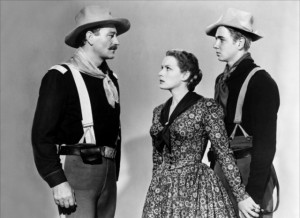 Still of the Yorke family.

The Wayne-O’Hara relationship forms the dramatic core of the story, to the extent that the story hangs together at all.  They’re the long-separated (15 years after the Civil War battles in the Shenandoah, making it 1879) and frequently hostile parents of young Jefferson Yorke (Claude Jarman, Jr., from The Yearling), a West Point dropout who has recently signed on as a new private and been posted to Yorke’s command out west in Texas.  Kathleen Yorke (O’Hara) is not without influence herself, as the daughter of a powerful southern family from Virginia’s Shenandoah Valley.  That family has never forgiven Yorke for burning their home Bridesdale (among others) during Phil Sheridan’s Shenandoah campaign, when Yorke was a Union officer in the late unpleasantness between the states.  Will Col. Yorke be able to rebuild his family, repair his relationship with his estranged wife and get to know the son long absent from his life while he’s been out on the frontier?  And what will young Trooper Yorke decide about his military future now that his mother is presenting him an opportunity to get out and pressing him to take it?  The answers to those questions are fairly predictable, but it plays out well

Meanwhile, the soldiers’ principal military problem is the raiding Apaches, who who strike in the U.S. and then retreat into Mexico across the Rio Grande where Yorke and his men can’t follow them.  A crisis comes when the Apaches capture a group of women and children from the military post and take them across the river.  With the complicity of the visiting Phil Sheridan (J. Carroll Naish), Yorke risks his career to cross the river and rescue the captives, leading to a final battle in an Indian-held town with the prisoners being held in a church. 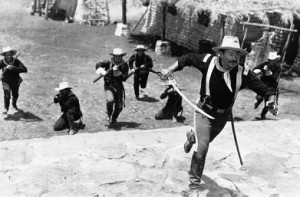 There is excellent chemistry between Wayne and O’Hara, leading to their pairing in four subsequent films.  (The most sucessful of these pairings was probably The Quiet Man, a non-western.)  A significant element of this chemistry is the sparks that fly from their disagreements, which may be why they frequently seem to play married but estranged partners.  It works better here than it does in, for example, McLintock!  O’Hara at 30 seems young to be the mother of a (more or less) adult soldier.  The supporting cast is good, although it contains many of John Ford’s usual suspects in their usual roles:  McLaglen as the grizzled, alcoholic Irish sergeant who provides occasional comic relief that doesn’t work all that well for current audiences; Ben Johnson as the former Confederate trooper; and Harry Carey, Jr., as a green trooper or young officer.  Chill Wills is good as the regimental surgeon.  Even if the story doesn’t hang together as well as the previous two in the trilogy, the movie is nevertheless quite watchable. 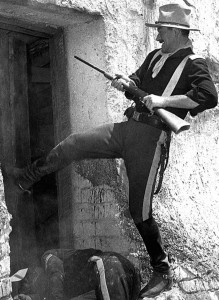 Col. Yorke busts down the door.

Most of Ford’s films have a streak of populist sentimentality, and this has more than most.  Some of that sentimental tone comes from the music, including traditional tunes and ballads provided by the Sons of the Pioneers (with one song even written by Dale Evans).  The source material is also a common thread with the others in the cavalry trilogy, since they’re all based on short stories by James Warner Bellah.  It was filmed in black and white, although a colorized version exists.  Bert Glennon, who did Ford’s Stagecoach more than a decade earlier, was in charge of the cinematography, and you can see some of the technical and artistic advances in the decade between the two films.  This one was filmed in the desert locations around Moab, Utah, not Ford’s usual Monument Valley in the Four Corners area to the south.