“… Wherever they rode, whatever they fought for, that place became the United States.”  Obviously, Ford’s own Rio Grande and Sam Peckinpah’s Major Dundee hadn’t been made yet, since they both involve cavalry expeditions into Mexico (still not part of the United States).  Maybe Ford would have said it anyway.

Of Ford’s cavalry trilogy, this one gives the best feel for cavalry life.  John Wayne is Capt. Nathan Cutting Brittles, a widower at Fort Stark about to retire from the military in 1876 with some reluctance after 40 years’ service.  He’s good with his men—authoritarian enough but pragmatic when he has to be.  His repeated advice, including to a young woman:  “Never apologize.  It’s a sign of weakness.”  But he also means for those so instructed to take responsibility for what’s happened.  He’s experienced in dealing with Indians and has long-term relationships with some of them.  His unit’s job of keeping the peace will be a lot harder without his experience and judgment. 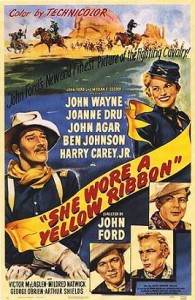 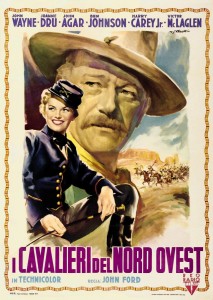 Contrary to what the Italian poster suggests, Joanne Dru does not wear pants with her military  costume.

To make matters worse, as the day for his retirement approaches there are new Indian hostilities to cope with.  The news of the Little Bighorn is fresh (placing this in 1876), and it makes the entire frontier military jumpy, as well as the Indians (Arapahoes, Cheyennes, Kiowas and Apaches are said to be among them here, an unlikely mix of tribes).  The local fort sutler might be running guns to the Indians.  (Sutlers and Indian agents are often venal, bad characters in John Ford and other westerns; see, for example, Fort Apache and They Died With Their Boots On.)  A beautiful visiting young lady from the East (Olivia Dandridge, played by Joanne Dru) has the young lieutenants at each other’s throats.  And Brittles is keeping a lid on it all in the face of his imminent retirement from the army and departure for California.

Brittles is sent out on a last patrol, taking along two women against his objections so they can be delivered to a stagecoach stop.  On the way they encounter hostile Indians and have to take military action against much greater numbers.  We get a sense of how decisions had to be made with incomplete information, and what it was like to deal with long distances with only horseflesh to depend on for transportation and communication.  In the end, Brittles is not banished from his military family and is given appropriate honors. 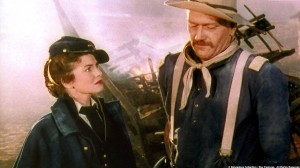 This has the usual John Ford characters:  the experienced, wise, and sometimes inspirational field leader in Brittles; the Irish sergeants (McLaglen in this case) who drink a lot; the immature lieutenants (John Agar and Harry Carey, Jr.) who embody the future of the cavalry; former Confederates who are respected for their military abilities (Sgt. Tyree, played by a young Ben Johnson); idealized young women who don’t understand the West or the military—yet (Joanne Dru); military wives as sage and experienced as their men (Mildred Natwick as the post commander’s wife).  Ford makes these familiar characters all work, even if we now feel like we’ve seen them before.  Ford’s work here is also marked by a certain sentimentality; sometimes heavy-handed manipulation with music, especially the title song; and the brilliant visuals and use of the desert locations that is one of Ford’s trademarks.  Unlike Fort Apache a year earlier and Rio Grande a year afterward, this one’s in color; it won Winton C. Hoch the Academy Award for Best Cinematography.  (Hoch also did 3 Godfathers with Ford the year before and The Searchers a few years later.)

This is the most striking visually of Ford’s cavalry trilogy.  Although Winton Hoch, the cinematographer, won an Academy Award for his work here, filming was not a smooth creative process because of Hoch’s conflicts with Ford.  One of the most iconic scenes from the film was created during a dispute.  As a line of cavalry rides through the desert, a real thunderstorm grows on the horizon.  Hoch began to pack up the cameras as the weather worsened, only to have Ford to order him to keep shooting.  Hoch argued that there was not enough natural light for the scene and, more importantly, the cameras could become potential lightning rods if the storm swept over them.  Ford ignored Hoch’s complaints, completing the scene as the thunderstorm rolled in, soaking the cast and crew with rain.  Hoch later had filed a letter of complaint against Ford with his trade union over the filming of this scene, but it’s a masterful sequence visually.  Hoch was still willing to work with Ford on The Searchers a few years later, however.

The dialogue is well-written and this film does an excellent job of depicting some of the logistics of cavalry life—what it was like to depend on horses and be out in all weather, and the need to walk periodically to rest the horses, for example.  There’s a real affection for the military and an elegiac feel.  However, the story seems a little like a bunch of incidents strung together, without a strong enough major story arc to it.  The parts may be greater than the whole, story-wise. 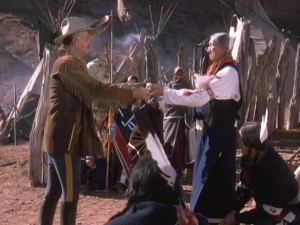 Nathan Brittles negotiates with an old friend (John Big Bear) among the Cheyennes.

The performances are good.  As in Red River, Wayne in his prime (at age 42) is called upon to play much older than he is, and he can do it, complete with an occasional touch of world-weariness here and there.  Ben Johnson has one of his better early roles here, as an ex-confederate captain now a sergeant in the western U.S. cavalry, providing a competent counterpoint to Brittles.  He can really ride, having come to Hollywood as a stunt man fresh from ranch work.  Joanne Dru is well-cast and does an excellent job as the romantic distraction to the young officers, and she looks good in a military hat and cloak.  (She was also in the Hawks classic Red River about the same time, in a rather different and more demanding role.  Compare her here with the beautiful Linda Darnell wearing a cavalry hat in Two Flags West.)  Mildred Natwick is very good as well.  McLaglen as Sgt. Quincannon seems broadly stereotypical and over-the-top, and one can get tired of the romantic squabbles of the young lieutenants.  Both Johnson and McLaglen show up again as characters named Tyree and Quincannon in the following year’s Rio Grande, although Wayne’s character is back to being named York in that one, as he was in Fort Apache.  And the commanding officer at Fort Stark, Major Mac Allshard, is played well by silent film star George O’Brien.  This was one of his last movies, although he would show up again 15 years later as another major in Ford’s Cheyenne Autumn.  The bartender in a scene in which Sgt. Quincannon is arrested is Ford’s brother Francis, a long-time character actor who pops up in small roles in many Ford films. 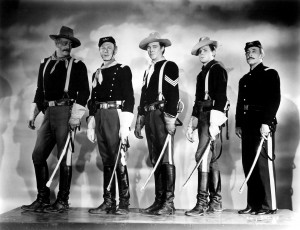 The cavalry is idealized in the post-World War II period when this was made, and the soldiers look cleaner than they probably could have in real life.  But it’s still stirring stuff to watch.  In Ford’s cavalry trilogy, this one is not as dark as the preceding Fort Apache nor as sentimental as the subsequent Rio Grande.

Although Ford’s sentimentality can occasionally seem heavy-handed to a current audience, he has qualities that more than compensate if you watch (and listen) for them.  This is especially true in the framing of shots and other visual touches.  For example, look for the thunderstorm in the background while the troop is out on patrol (the subject of the Ford-Hoch dispute referred to above), in the days before such things could be conjured up by special effects.  But it also reaches the use of music as well.  As Wagner, the regiment’s blacksmith, is working at his forge and anvil, the music playing is the “Nibelung” motif from Richard Wagner’s famous opera “Siegfried.”   In the opera that motif is connected with the forging of Siegfried’s sword, appropriate in this military setting but easy to miss.  Richard Hagerman provided the score.