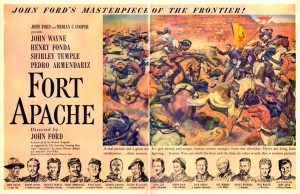 A Custer-esque poster, reminiscent of a print often seen in 19th century saloons.

This is the first of Ford’s cavalry trilogy from the late 1940s, a landmark series and an extraordinary achievement in the western genre.  This initial entry revolves around the conflict in leadership between Lt. Col. Owen Thursday (Henry Fonda, with a streak of white in his hair), a by-the-book martinet with no experience in dealing with Indians, and the more reasonable, pragmatic and experienced Capt. Kirby York (John Wayne).  The Chiricahua Apaches under Cochise have left their reservation (the leadership of Cochise would place this in the early 1870s) and gone to Mexico.  It falls to Thursday’s command to deal with them. 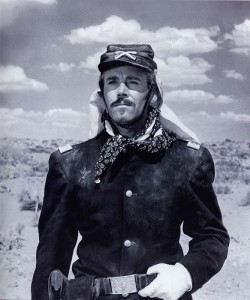 West Point graduate Thursday rose to be a general in the Civil War, but afterward he was reduced in rank as the military shrank to its peacetime size.  He feels that small-time Fort Apache in Arizona Territory isn’t worthy of him, and, Custer-like, he wants to reclaim supposed past military glories in his new posting.  He’s overly concerned with insignificant military niceties and too stubborn to accept advice from more experienced subordinates.  His highest-ranking subordinates are Captains York, who also saw service as a colonel in the Civil War but has since acquired considerable experience out west dealing with the Apaches, and Collingwood (silent film star George O’Brien, who played older officers in all three of Ford’s cavalry trilogy movies), older than York and with a longer and warmer acquaintance with Thursday.  Collingwood is on the verge of retirement, just waiting out the days or weeks in this remote outpost until his final retirement orders come through.  Unlike Thursday, York has enough experience to realize the outpost’s vulnerabilities.  As York sees it, not everything needs to come to a fight, including the current situation with Cochise.  To complicate matters, Thursday’s daughter Philadelphia (an almost grown-up ShirleyTemple) shows up at the post and develops a romantic interest in young West Point graduate Lt. Michael O’Rourke (John Agar).  O’Rourke is the son of the post’s Irish sergeant major (Ward Bond)—now a non-commissioned officer, although he was a Medal of Honor winner and a major in the Civil War.  To Thursday, that would be a highly unsuitable match. 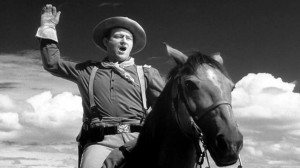 Thursday shows some signs of being able to learn as he and York discover that the Apaches have left their reservation because they’ve been systematically cheated by a corrupt Indian agent, who’s also selling guns and alcohol to them on the side.  York is sent with Sgt. Beaufort (a Mexican and former Confederate major, played by Pedro Armendariz; the sergeant speaks Spanish as does Cochise) on a diplomatic mission to find Cochise and persuade him to come back.  In reliance on York’s word, Cochise and his people come far enough back to parley with Thursday.  However, Thursday is certain he knows best, and he is grossly and unnecessarily offensive to the Indians, precipitating a battle.  He is sure that savages with no training cannot have the military capability of defeating U.S. cavalry, no matter how outnumbered that cavalry might be.  Going against York’s advice, Thursday charges into an ambush, with York and young O’Rourke ordered to stay behind with the supply train. 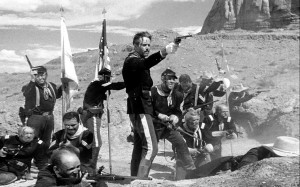 The result is the massacre of all Thursday’s men, including Collingwood and the elder O’Rourke.  In the final scene at the post some years after the event, York is now the commanding officer, and not-quite-so young O’Rourke is his second in command, now married to Philadelphia Thursday.  Members of the press are asking York about Thursday’s supposedly heroic last stand and a famous painting of “Thursday’s Charge,” and York confirms the glorious myth—“Correct in every detail,” he says of the overblown and obviously inaccurate painting.  It’s a foretaste of the Liberty Valance valedictory:  “When the legend become fact, print the legend.”

There are the usual Ford cavalry characters here:  Irish sergeants led by Michael O’Rourke (Ward Bond), Fergus Mulcahey (Victor McLaglen) and Quincannon (Dick Foran); young, mouthy lieutenants (John Agar); beautiful eastern young women (Temple) inexperienced with the west; savvy long-time military wives (Emily Collingwood and Mary O’Rourke, played by Anna Lee and Irene Rich); noble Indian leaders (Cochise, played here by Miguel Inclan); former Conferates now serving well out west (Armendariz); and scurrilous Indian agents (Silas Meacham, played by Grant Withers).  There are names that will recur in future parts of the cavalry trilogy:  Quincannon (a stereotypical Irish sergeant played by twice by McLaglen in She Wore a Yellow Ribbon and Rio Grande) and Kirby York (played again by Wayne in Rio Grande).  No Ben Johnson or Harry Carey, Jr., yet, though; they’ll have to wait for She Wore a Yellow Ribbon.  Young lovers Agar and Temple were in fact married at the time, although they’d be divorced in a couple more years. 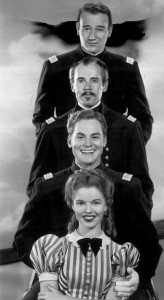 These three movies were not conceived as a trilogy, and, though they all have typical Ford weaknesses (nostalgia, sentimentality, broad stereotypes), they have his strengths as well, including his unparalleled visual sense.  This, like the others, was filmed at Utah’s Monument Valley (although the Fort Apache set was located in Simi Valley, California), and is in black and white.  In some ways, the plot of Fort Apache is the strongest of the three.  It’s based on a short story by James Bellah, “Massacre.”

In addition to Custer, an Arizona inspiration for the story might be Lt. Howard Cushing of the 3rd Cavalry.  Cushing led his troopers into an Apache ambush at Bear Spring northwest of Fort Huachuca in Arizona Territory and was killed.  He is sometimes referred to as “the Custer of Arizona.”