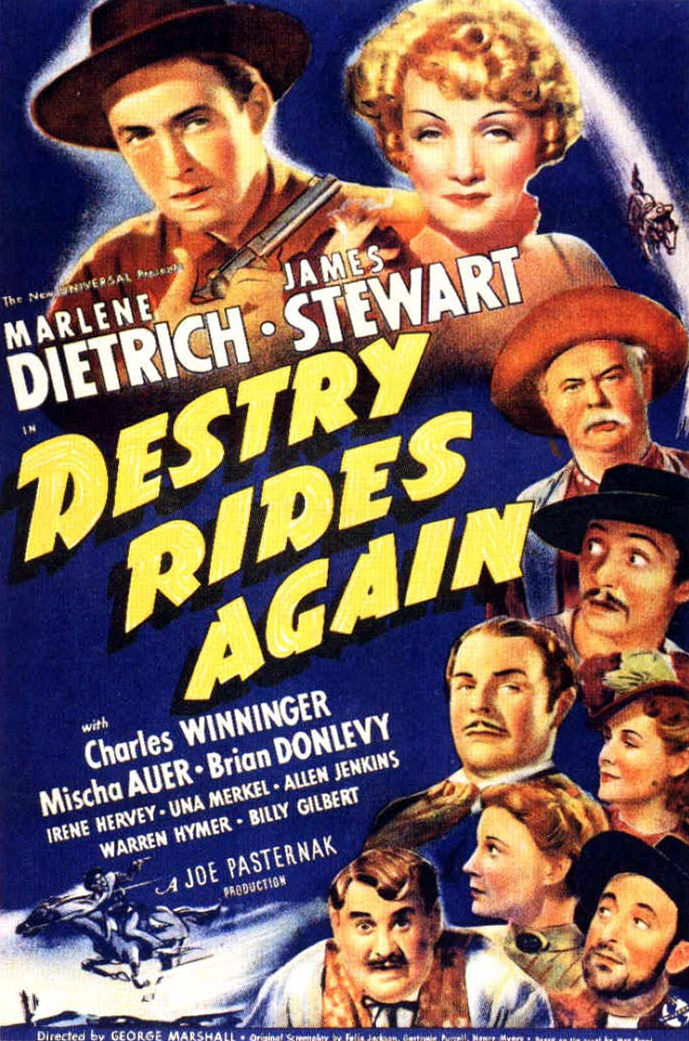 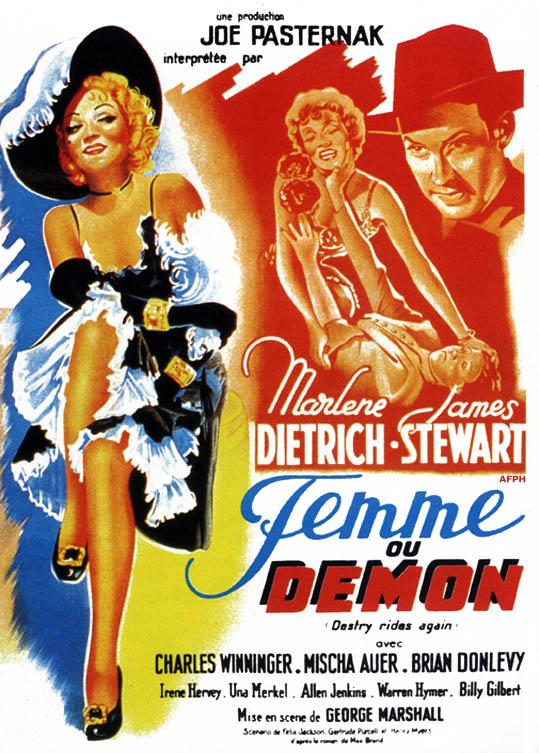 Another one of the really good westerns from 1939, which was as good a year for westerns as it was for movies generally.  Although it has a large and excellent cast, it depends principally on the two biggest names, James Stewart and Marlene Dietrich, and how they work out things between them.  With both this and Mr. Smith Goes to Washington, 1939 was a good year for Stewart, playing Thomas Jefferson Destry in one and Thomas Jefferson Smith in the other, both in obvious appeals to old-fashioned patriotism.  It was Stewart’s first western and the last for eleven years, until he hooked up with Anthony Mann for 1950’s Winchester 73, well after World War II.

Bottleneck is a corrupt town run by Kent (Brian Donlevy in his smooth bad-guy mode), owner of a huge saloon where the principal entertainment seems to be provided by Frenchy (Marlene Dietrich in the first of her three westerns), not that she has a great singing voice.  The local mayor Hiram J. Slade (Samuel S. Hinds), constantly chewing tobacco, is in Kent’s pocket.  And Kent is busily collecting deeds to a strip of land across the valley (by means of rigged card games and other similarly unscrupulous methods), so he can extort a toll from drovers of cattle herds wanting to cross.  Once the local sheriff in Bottleneck was Tom Destry, who moved on to Tombstone, leaving behind deputy Washington Dimsdale (Charles Winninger), now a drunk reduced to cadging quarters and drinks in Kent’s saloon (like the character Dude in Rio Bravo twenty years later). 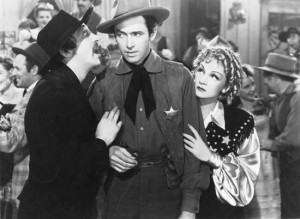 As the movie opens, Kent, with Frenchy’s help, cheats yet another ranch owner out of his land at cards and kills Sheriff Keough.  Mayor Slade cynically appoints Dimsdale, the town drunk, as the new sheriff.  However, Dimsdale sobers up and sends for Thomas Jefferson Destry, Jr. (James Stewart), who is said to have cleaned up Tombstone after his father was shot in the back there.  Destry arrives on a stage in the company of a hot-headed rancher, Jack Tyndall (Jack Carson), and his sister Janice (Irene Hervey), only he doesn’t wear a gun—says he doesn’t believe in them.  He’d rather whittle napkin rings.  He manages to deal with several near-crises without guns, and develops what appears to be an interest in Frenchy.  He pauses long enough to demonstrate an uncommon skill with a handgun in target practice, although to the viewer the casual way Destry handles a pistol (slinging it carelessly at the target) seems unlikely to be accurate.  There’s a truly impressive barroom fight between Frenchy and Lily Belle Callahan (Una Merkel)—right up there with other great fights in westerns. 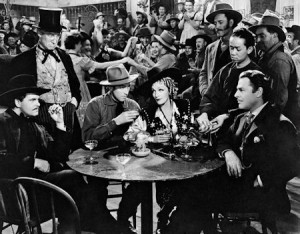 Meanwhile, Destry looks into the disappearance of former Sheriff Keough, and even manages to discover the sheriff’s body.  Mayor Slade appoints himself the judge, while Destry and Dimsdale secretly send for a federal judge.  When Kent and Slade find out about the federal judge, a war breaks out and Destry is forced to put on his guns.  Dimsdale is killed, and the forces of right and justice attack Kent’s saloon.  Both sides are blasting away when the saloon is invaded by the town’s women (marshaled into action by Frenchy), wielding brooms and such.  Both sides hold their fire and the women appear to be winning the battle in the saloon.  Kent sneaks a shot at an unaware Destry, and Frenchy redeems herself for all her shady dealing when she takes the bullet for him.  (This is the way both this and Rancho Notorious end, with Marlene Dietrich taking a bullet for somebody else to redeem herself for her nefarious misdeeds.)  At the end, Destry’s romantic attentions seem to be turning to Janice, less overtly interesting than the deceased Frenchy but much more appropriate for Destry. 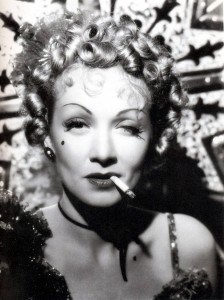 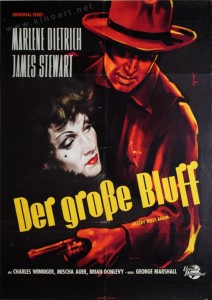 Frenchy (Marlene Dietrich):  She knows what the boys in the back room will have.

It’s engaging and almost great, but it has a kind of Capra-esque sentimentality and shows its age a bit—more than, say, Stagecoach or even Dodge City from the same year.  The tone is wryly comic (except for the occasional death) with Stewart’s Destry, and more overtly with Mischa Auer as Boris Stavrogin, a Russian dominated by his wife (Una Merkel) to the extent that everybody calls him by the name of Callahan, who was her prior husband.  He’s there for comic relief, mostly effective.  It’s not that easy to pull off, but it flows pretty smoothly here.  In some ways, one can see Support Your Local Sheriff from 30 years later as an attempt to do the same thing, although it’s not exactly a remake.  Some of the humor dealing with roles of the sexes seems a bit outmoded.  Destry’s aw-shucks demeanor and interminable stories about a feller he once knew somewhere are almost as tiresome to his fellow characters as they are to us.  Brian Donlevy is at his nefarious best, the same year as he played another of his memorable villains:  the evil Sergeant Markov in Beau Geste.  This was remade twice in the early 1950s, with Joel McCrea and again with Audie Murphy, but this second version (after a 1932 Tom Mix original) is much better than either of those—or the original, for that matter.  Nobody much remembers the 1959 musical comedy Broadway stage production with Andy Griffiths.

Director George Marshall (The Sheepman) was a journeyman who started in the age of silents and ended up doing television in the 1960s.  He was not particularly known for westerns.  Lyrics to songs, including “See What the Boys in the Back Room Will Have” (one of the most effective musical interludes ever in a western), were by Frank Loesser.  In black and white.  “Suggested by” a story by pulp writer Max Brand.