Epic version of part of Kenneth Roberts’ 1936 novel about Rogers’ Rangers and their most famous exploit, the raid on the Abenaki settlement at St. Francis in October 1759 during the French and Indian War.  More than half the Rangers died on their grueling return from the raid through very wild country teeming with French and their Indian allies.  The subtitle of the film is Book One:  Rogers’ Rangers.  A sequel was planned but never made, showing Rogers’ deterioration and descent into debt and alcoholism in England after the war, as a loyalist increasingly out of tune with more pro-American colonists.  During arduous filming in northeastern Washington, Tracy came to loath director King Vidor and swore he’d never work with him again.  The film’s music features the old English army tune “Over the Hills and Far Away,” later used in a similar fashion in the Sharpe series set in the Napoleonic wars. 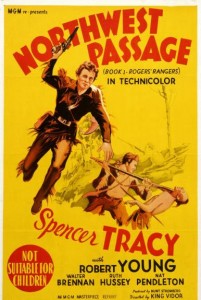 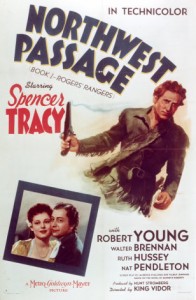 The posters emphasize Indian-fighting, the epic scale of the story, and its connection with the best-selling novel by Kenneth Roberts.

Young Harvard-educated (until he is expelled) artist Langdon Towne (Robert Young) and his friend Hunk Marriner (Walter Brennan) get in trouble in their native Portsmouth, New Hampshire, for making seditious comments about a local English official (Montague Love).  To avoid jail, they leave for the west.  They join Major Robert Rogers (Spencer Tracy), who offers them the chance to go farther west and paint Indians if they become Rangers and go with him on a raid north into French territory and make maps.  Trying to avoid detection by the French, the Rangers make their way arduously northward from the English fort at Crown Point, at one point portaging their boats laboriously over a mountain and at another wading through interminable swamps.

The St. Francis Abenaki village the rangers are hitting is not just a peaceful Abenaki settlement.  It has been used for decades as a base for raids by French-allied Indians (Abenakis, Hurons, and Catholic Mohawks) on frontier settlements in the colonies farther south in English territory.  Most of the rangers have experienced the effects of these raids, and the objective is to hit it hard enough so that it won’t be used as a base for future guerrilla activity.  According to Rogers’ subsequent report, the rangers found 600-700 scalps fluttering in the breezes at St. Francis.  Lord Jeffrey Amherst, the British commander, also wanted to divert French military attention and resources from James Wolfe’s army at Quebec. 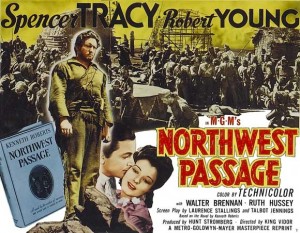 The rangers arrive at St. Francis and are successful at their military objective in a harrowing sequence, but they find none of the food they had counted on for their difficult return by a different route.  Towne receives a wound to his midsection, and they gather white captives for the return by way of Lake Memphremagog.  Against Rogers’ advice, they vote to break into four groups for the return trip.  French and Indians pick off some; injuries, starvation and madness take others.  Out of the 142 Rangers, only about 50 make it to the rendezvous at Eagle Mountain.  Straggling into Fort Wentworth where they expect finally to find provisions and support, they instead find it abandoned.  But it isn’t long until a British unit headed in most unlikely fashion by Lord Jeffrey Amherst (Lumsden Hare) himself marches in, replete with supplies.  Towne goes back to his girlfriend (Ruth Hussey), and the Rangers march off to the west, supposedly in search of the Northwest Passage across the continent. 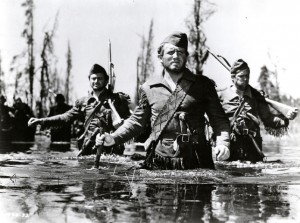 Tracy is superb as Rogers, an inspiring leader who carries our attention and commands respect throughout the movie.  He didn’t actually make westerns, though; the closest he ever came again was in the excellent Bad Day at Black Rock, set in the modern west, in Broken Lance and in the range melodrama The Sea of Grass..  Brennan is good and Young pretty good as the two regular characters whose story we’re following.  Addison Richards is also good as an officer who becomes unhinged after the brutality on both sides.  Ray Teal and Hank Worden have uncredited early roles as Rangers.  Much of the film was shot outdoors on location in eastern Washington and the Payette River in Idaho, and it shows on screen.  Shot in color (rare for 1940), this film was nominated for an Oscar for cinematography.  It was also long for its time, at more than two hours.  It finally became available on DVD in Dec. 2011.

The title hasn’t much to do with the events or subject matter of the movie; it refers to where the Rangers are headed at the end of the film.  However, it probably had to be the same as the best-seller on which it was based.  Compare the plot with Errol Flynn’s World War II movie Operation Burma a few years later.

The racial attitudes will appear dated to the sensibilities of viewers more than 70 years later.  But they weren’t much questioned in 1940, and they were even stronger in the era depicted, 200 years earlier, when many frontier dwellers had been subjected to Indian raids and atrocities.  Viewers who can’t put themselves into the perspective of other historical times may have trouble with this.  The Indians are mostly stereotypical, with Konkapot as the head of Rogers’ Stockbridge Indian scouts not given much to say and little screen time.  Indian tortures and atrocities are described, but not shown.  At St. Francis, almost all of the Indians shown are men of fighting age, not the women and children who would also have been present.  The Indians generally look like plains Indians, rather than their eastern woodland counterparts, especially as they would have dressed late in the year.  The whole idea of slaughtering Indians, admirable in the 1930s, is almost unthinkable today.  Modern animal rights enthusiasts wouldn’t care for the way Rogers silences a barking dog in the Abenaki village, either—with a thrown hatchet.  The movie makes compelling watching if you can get past current social attitudes, though.  This and 1992’s Last of the Mohicans are probably the best movies about the French and Indian War and this phase of American frontier history.

Lord Jeffrey Amherst here is shown more positively than he is generally remembered these days.  Sir William Johnson’s Mohawks are depicted as unreliable, duplicitous and shifty; Johnson usually gets better press now.  It is true that the actual Rogers didn’t get along well with Johnson, and was regarded with suspicion by the British army structure within which he served.  As depicted, the Indians did call him White Devil.  There have been a couple of good biographies of the father of U.S. special forces in recent years:  see White Devil by Stephen Brumwell (2006) and War on the Run by John F. Ross (2009).  Roberts’ pro-American novel with 1930s attitudes is also good reading, although long out of print now.  Roberts was reportedly horrified at the movie, however.  As a Loyalist (or Tory), Rogers was responsible for uncovering American spy Nathan Hale during the Revolution, with which he disagreed.  He was an American type:  the frontiersman competent and feared while fighting Indians and exploring terrain in the wilderness environment where he felt at home but out of touch in other more civilized surroundings (see George Rogers Clark, Daniel Boone, Davy Crockett, Jim Bridger, Kit Carson, maybe even Meriwether Lewis).  It makes Andrew Jackson seem more admirable, as one who could function well in several worlds.

Not to be confused, or even connected, with Southwest Passage (1954).