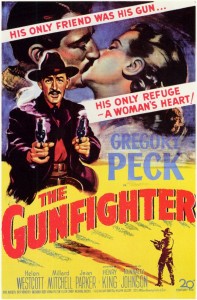 Right after the opening credits:  “In the Southwest of the 1880’s the difference between death and glory was often but a fraction of a second. This was the speed that made champions of Wyatt Earp, Billy the Kid, and Wild Bill Hickok. But the fastest man with a gun who ever lived, by many contemporary accounts, was a long, lean Texan named Ringo.”  Despite this invoking of historical figures, Jimmy Ringo is a fictional character, with the name apparently adapted from John Ringo, the Arizona gunman.  It has been popular as a name for cinematic gunfighters and outlaws, used in Stagecoach, innumerable Spaghetti westerns and many others.  Although this Ringo is said to be very fast with a gun, with expert film editing we never actually see him draw during the movie.

Heading for Cayenne, New Mexico, Jimmy Ringo’s reputation as a gunfighter catches up with him yet again in a Santa Fe saloon.  A kid named Eddie (Richard Jaeckel in one of his shortest roles) won’t leave him alone until he forces Ringo (Gregory Peck) to draw, and Ringo kills him easily but not happily.  Eddie has three brothers who take out after Ringo.   He waylays them and sets them afoot on the trail. 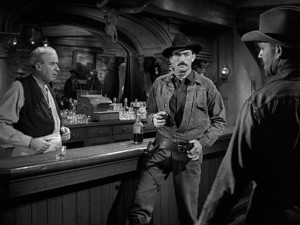 Ringo (Gregory Peck) spends much of the movie in saloons, this time facing off against Richard Jaeckel.

In Cayenne, Ringo sets up in the Palace, where he encounters the local marshal, Mark Strett (Millard Mitchell).  Strett once rode with Ringo, knows Ringo’s past and the fact that Ringo’s estranged wife Peggy (Helen Westcott) is in Cayenne.  Living under another name, she’s the local schoolteacher and wants nothing to do with Ringo and his notoriety.  All the boys in town skip school to catch a glimpse of the infamous gunfighter, including Ringo’s own son Jimmy, now nine years old.

Ringo encounters the usual problems in Cayenne.  Hunt Bromley (Skip Homeier), a young local who fancies himself fast with a gun, prods Ringo.  An older man thinks Ringo was responsible for the death of his son and is determined to ambush him from an upstairs hotel room.  Eddie’s three brothers make it to Cayenne.  And the local female forces of righteousness want Marshal Strett to lock him up or hang him.

Ringo copes with these one by one, hoping that his wife Peggy will just talk with him before he leaves town.  Molly, an aging saloon girl and old friend of both Jimmy and Peggy, finally talks Peggy into seeing him.  Ringo describes how he plans to leave his gunfighting life and says he’ll be back in a year for her.  He talks with his son without revealing their relationship.  And Strett gets antsier for him to leave town before something happens. 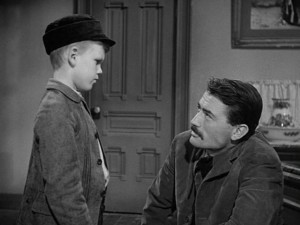 Finally Ringo leaves out the back of the Palace, where the camera shows Eddie’s brothers lurking in wait for him.  Strett’s deputy backs them off just when it looks like their ambush will succeed.  Jimmy gets on his horse and is about to leave town, when Hunt Bromley shoots him in the back.  As he lies dying, Jimmy tells Strett that he drew first on Bromley, and Bromley thinks Ringo’s trying to keep him from being arrested.  Ringo’s actually dooming Bromley to a short life of the kind he’s had, with a reputation that draws challengers like flies.  Peggy reveals her connection with Ringo at the funeral.

Gregory Peck wears a mustache in this film, unusual for him.  The studio hated the mustache and, after the film didn’t do well at the box office, figured that it was the mustache’s fault.  Peck was a natural at conveying decency and rectitude (he and Joel McCrea come to mind first in that regard), and this is one of his best westerns notwithstanding the mustache.  Maybe it was the unattractive hat.  In any event, these qualities lend him credibility in persuading us that Ringo at the advanced age of 35 does want to change his life.  Ringo could have killed the old man waiting for him with a Winchester but doesn’t.  Asking about the man’s son, it becomes clear that Ringo had nothing to do with the kid’s death and has been blamed for all kinds of things he didn’t do.  In one of the best scenes, Ringo is alone in the marshal’s office when the decent women come looking for the marshal.  They don’t know who Ringo is, and he kind of explains himself to them without telling them of his identity.  The ending is strong and really makes the movie.  The entire film depends on Peck carrying it, and he does that well. 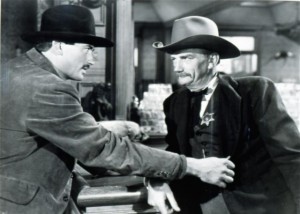 Millard Mitchell was in three good westerns in the early 1950s:  Winchester ’73 and this one in 1950, and The Naked Spur in 1953.  He looks like a regular person (rather than an actor), but he’s good in all of these.  Helen Westcott is adequate but nothing special.  Skip Homeier is good as Hunt Bromley; he could always play a mouthy kid with a gun (see Dawn at Socorro, Ten Wanted Men, The Tall T and Comanche Station, for example).

Henry King was an experienced workmanlike director, and this is one of the better efforts late in his career.  It’s in black and white and feels like it was shot with a limited budget.  Nevertheless, it tells one of the quintessential western stories (the aging gunfighter who can’t escape his past) well.  King directed Peck again in The Bravados (1958), a pretty good revenge-manhunt western.  The original story was by William Bowers and B-movie director Andre de Toth, and the screenplay was by Bowers and William Sellers.

In the late 1990s Richard Jaeckel was dying of cancer and his wife was suffering from Alzheimer’s; they had lost their home in Brentwood, California, and were more than a million dollars in debt.  Gregory Peck was one of those instrumental in getting Jaeckel admitted to the Motion Picture and Television Hospital in Woodland Hills, California, where he died in June 1997.