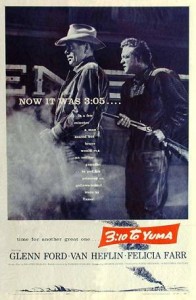 There’s an undercurrent of fatalistic courage in the Dan Evans character played by Van Heflin.  Dan struggles with his obligations the whole movie, but when it counts he doesn’t just stand by and watch.  The inevitable comparison is with the 2007 remake.  Well, this unpretentious 1957 original from a story by Elmore Leonard has much less action than the remake; it’s more a psychological study, with Glenn Ford’s excellent performance as ruthless but charming outlaw boss Ben Wade at its heart.  The plot holds together a little better, and the ending is simpler and makes a bit more sense, although there have always been those who don’t find this original ending believable, either.  For a western, there’s a lot of talk in this movie.

Van Heflin as Dan Evans is good, but he’s doing a version of his solid rancher character from Shane, the sort of role for which he is now mostly remembered.  This one is deeper and more complex, with more camera time for his character.  Evans is an Arizona rancher about to go under financially.  When a reward is offered to get captured outlaw chieftain and gunman Ben Wade on the 3:10 train to Yuma, where the infamous territorial prison is located, Evans takes the job as a way to address at least some of his difficulties.  Unexpectedly, a relationship of sorts develops.  Heflin’s stolid and beleagured Evans gives Ford’s Wade a worthy opponent to play against, as Evans’ courage develops while he’s faced with temptation.  Evans’ ambivalence is obvious the entire movie as he is forced to hear Wade’s Mephistophelean blandishments during a lengthy stretch in an upper hotel room (the bridal suite, in fact) in Contention.  As things turn out, Wade also has more ambivalence than he has showed most of the time. 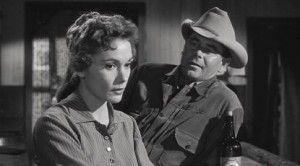 Leora Dana, as Evans’ wife Alice, seems realer than Gretchen Mol does in the remake, but she’s also given a meatier role than Mol.  It’s a little surprising how much of Wade’s interlude with a saloon girl Emmy (Felicia Farr) was in the original; it seems a little frank in its implications for a 1950s western.  Richard Jaeckel as Wade’s second in command Charley Price doesn’t have Ben Foster’s psychotic edge, but the role wasn’t written that way the first time around.  Missing from the remake is Henry Jones’s role as Alex Potter, the town drunk cum outlaw guard, replaced by Alan Tudyk as Doc Potter in a different kind of role.  Also not in this original:  the nastiness of the lender and his repulsive henchmen; the father-son developments between Dan and his oldest son; Dan’s disability and Civil War background; the morally-blinkered Pinkerton man killed by Wade on the trip to Contention; and the Indians and the railroad men who try to the keep the party from making it there.  In fact, the arduous segment from Evans’ ranch to Contention is not in the original.  Wade’s gang in Contention seems a little more human and less invincible, although Dan Evans still seems very overmatched. 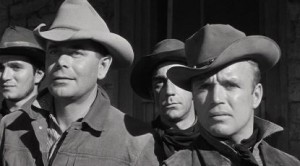 In the end, Alice shows up in Contention to try (unsuccessfully) to talk Dan out of walking Wade to the train; and as Dan and Wade get to the train under attack from Wade’s gang, they just roll into an empty boxcar on the moving train.  Dan has earned Wade’s respect, and it’s Wade who suggests getting onto the train to get Dan out of an otherwise untenable situation.  He ends by saying that he’s broken out of Yuma before, and the feeling is that he’ll do it again.  That’s probably okay with Dan, who just sees his job as getting Wade to Yuma and is not concerned with what may happen after that.  He’s developed a little affection for Wade, too, if not any admiration for his moral character. 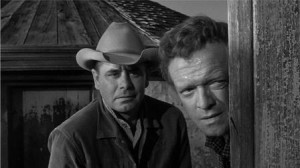 Wade (Glenn Ford) and Evans (Van Heflin) look to make a run for the 3:10 train to Yuma.

You can see this as another of those 1950s meditations on the uneasy relationship between the law enforcer and the town he protects, as with High Noon, The Tin Star, and Warlock, although the emphasis here is on the developing relationship between Evans and Wade.  Dan is one of those ordinary citizens who steps up, not a professional gunman or career law enforcement man.  There are obvious noir influences here.  This original version of the story is highly watchable and ought to be seen by any fan of the remake.  This could legitimately be placed on a list of great westerns, and probably would be if it weren’t eclipsed by the showier remake.  At 92 minutes, it’s also considerably shorter than the remake.  This is more about psychology (in a good way); the remake is more about action.  Glenn Ford dazzles in the juicier Ben Wade role.


In general Delmer Daves seems a workmanlike director who made some good westerns in the 1950s.  His work is usually worth seeking out.  But he has his champions as something more.  Bertrand Tavernier pointed out in Film Comment, “What first impresses the viewer is Daves’ attention to landscape, to nature, expressed in shots that intimately and sometimes inextricably mingle lyricism and realism.

“He actually insisted on personally supervising the kind of material many Hollywood filmmakers would leave to second-unit directors–extreme long shots, transitional moments filmed at dawn or twilight.”

In black and white; cinematographer Charles Lawton (not Laughton), Jr., also worked with Budd Boetticher during this period.  This would get some votes as the most beautifully shot black-and-white western ever made, if you watch it in high definition (either the Criterion Collection DVD or somewhere like TCM).  The Contention-Bisbee railroad connection figured again in Leonard’s story for Hombre.  The theme song is sung by Frankie Laine:  “Though you’ve got no reason to go there, and there ain’t a soul that you know there, when the 3:10 to Yuma whistles its sad refrain, take that train . . . . . .”

Note:  The hat Glenn Ford wears in this movie he wore for most of his westerns in the 1950s and 1960s, long past when it should have been retired.  He joins John Wayne and James Stewart as western stars with recurring hats.