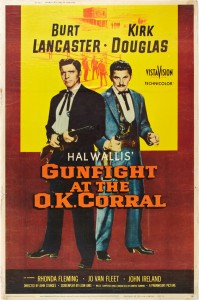 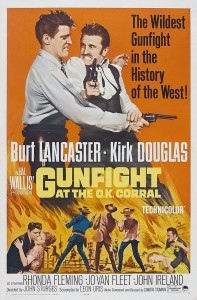 This is the first and bigger-budgeted (and not necessarily the better) of two effective retellings of the story of Wyatt Earp in Tombstone directed by John Sturges.  A decade later he’d do it again with a lower-wattage cast in a version that told the story better.  This version owes something to My Darling Clementine, and it’s not much closer to the facts than John Ford’s classic was.   The gunfight itself is the end, rather than the middle, of the story as shown here.

Two Hollywood giants of their day, Burt Lancaster and Kirk Douglas, play Wyatt and Doc Holliday—the second of seven films the two made together.  Douglas, although an excellent actor here, is obviously from the Victor Mature school of robust tuberculars, very different physically from the spindly homicidal dentist of history.  Rhonda Fleming is lady gambler Laura Denbow, a romantic interest for Earp in Dodge City, although she refuses to follow him to Tombstone and actually isn’t very necessary to the proceedings.  Jo Van Fleet is Kate Fisher, Doc’s not-very-faithful prostitute girlfriend, obviously based on Big Nose Kate Elder.  Dennis Hopper is good as a conflicted young Billy Clanton, but Lyle Bettger isn’t terribly memorable as Ike. 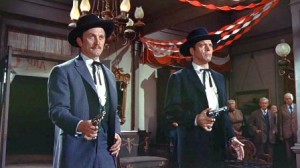 The gunfight, like that in Clementine, is nothing like what actually happened.  In addition to all the choreography, it shows Ike and Finn Clanton getting killed, and ultimately Billy, too.  In fact, Ike ran away from the fight and survived intact, and Finn wasn’t there.  Doc shoots down Ringo (well-played by John Ireland), but Ringo wasn’t there either.  As with Clementine, the action is precipitated by a Clanton killing of the youngest Earp brother, James (Martin Milner).  In fact, James was the oldest Earp brother and was not involved in the events in Arizona at all.  The actual gunfight lasted a mere 30 seconds, resulting in three dead men after an exchange of 34 bullets.  In this adaptation, the movie gunfight took four days to film and produced an on-screen bloodbath that lasted five minutes.  And there’s nothing about the subsequent murder of Morgan or the maiming of Virgil Earp, or Wyatt’s vendetta ride.  Like most versions from this era, the story steers clear of Wyatt’s irregularities in his relationships with women. This movie works by itself as a story, as long as you’re not remembering the real story too much.  This also makes Earp’s role as a Dodge City lawman more important than it was.  As a cinematic matter, a nice touch is the montage of shots of concerned women just before the gunfight:  Ma Clanton, worrying about her errant sons, especially young Billy; Allie Earp, Virgil’s wife; and the faithless Kate Elder.

Heading for the corral with a low camera angle–clearly not a social call.

An interesting comparison is with Sturges’ second version, Hour of the Gun, which features James Garner in his grim mode as Wyatt and Jason Robards as a sardonic Doc—not as lustrous a cast, but it works better. Much of this film was shot at the famous Old Tucson facility, not far from the real Tombstone.  However, its “town street” set was used surprisingly as Fort Griffin, Texas, in the opening reels, while later Tombstone street scenes were shot in southern California, on the same Paramount Ranch set that was later used as Virginia City, Nevada, on TV’s “Bonanza” (1959).  The theme song is sung by Frankie Laine, who had a voice made for western themes.  Excellent score by Dimitri Tiomkin; cinematography by Charles Lang.  The co-writer on this was apparently Leon Uris, author of the best-selling novels Exodus and Battle Cry.

Dennis Hopper, interestingly enough, was born and raised in Dodge City, Kansas, where the first half or more of this movie takes place.  Billy Clanton: “I don’t know why I get into gunfights. I guess sometimes I just get lonely.”  This was also the second time John Ireland was gunned down in Tombstone; here he plays Ringo and in Clementine he was Billy Clanton.  Wyatt’s last word on the subject:  “All gunfighters are lonely.  They live in fear.  They die without a dime, a woman or a friend.”