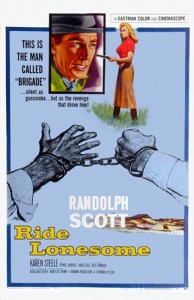 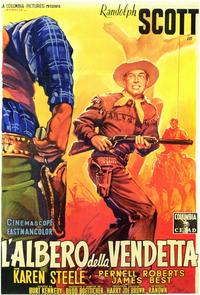 One of the last Ranown westerns, and generally thought to be one of the better ones.  (The four best are Seven Men from Now, The Tall T, Ride Lonesome and Comanche Station.)  Randolph Scott is bounty hunter Ben Brigade, who captures stupid young killer Billy John (James Best) in the movie’s opening scene.  This is a manhunt/vengeance western, in which Brigade really wants to use Billy as bait for his older brother Frank (Lee Van Cleef, in his 1950s bad guy mode).  When Brigade was a lawman years ago in Santa Cruz, he had brought Frank to justice only to see him given a light sentence by a cooperative judge.  Frank then captured and hanged Brigade’s wife at the movie’s most potent symbol, the hanging tree.

The young widow (Karen Steele) is not pleased.

The interesting relationship here is not Brigade’s with Frank or Billy John, or even with young blond widow Mrs. Carrie Lane (Karen Steele).  It’s with Sam Boone (played well by Pernell Roberts, with a very resonant voice), a sometime outlaw and longtime acquaintance of Brigade who wants to go straight and thinks possession of Billy John will enable him to obtain amnesty for his past crimes.  When Brigade doesn’t trust him and won’t give him Billy John, it’s not clear how far Boone will go to get Billy John.  He has some good instincts, but also some not so good.  The trip to Santa Cruz is complicated by hostile Apaches (who have caused Mrs. Lane to be a widow at the start of this movie), and supposed pursuit by Billy John’s brother Frank, who is apparently untroubled by the Indians.

Roberts’ Boone has the quintessential Boetticher-Scott-Kennedy line:  “Some things a man can’t ride around.”   Scott said it in The Tall T.  The line wasn’t exclusive to a Kennedy script; John Wayne had a version of it in Stagecoach and it has been used many times in westerns.

There is a final showdown at the hanging tree, and things are sorted out.  Brigade doesn’t end up with the woman in this one (as he also doesn’t in Comanche Station, for example).  The movie’s memorable final image is of Brigade standing in front of the burning hanging tree, as his long-awaited vengeance crumbles to ash.

Brigade at Hangtree with Billy John.

A very good western, but not quite as good as Seven Men from Now and The Tall T, which both feature better bad men.  Pernell Roberts isn’t written to be bad enough, the opposite of Claude Akins in Comanche Station, who’s too obviously only bad.  Still, Roberts provides one of the principal dramatic questions:  Will he actually try to kill Brigade?  We think we know what the result will be if he does, and until we find the answer he’s the most talkative character in the movie.  However, if he were more obviously bad, maybe the ending wouldn’t work.

It has kind of a meaningless title with generic western resonance; “The Hanging Tree” or something like that would have been better, although it was used in a Gary Cooper movie about the same time.  Frank needs a little more development, maybe a little more explanation of the hanging.  There are indications he might be interesting if given a little more screen time.  Brigade spends almost all of the movie just being implacably righteous.  This was the first film for a young James Coburn (as none-too-smart Whit, Boone’s sidekick), and it got him cast in Face of a Fugitive and, more significantly for his career, The Magnificent Seven.  Steele is fine, but too 1950s blond and too young-seeming for Scott.  (She’s also in the Boetticher-Scott Westbound and Decision at Sundown, and she eventually married Boetticher.)  She does provide sex appeal and a certain kind of focus for the group; it just isn’t clear where she’s going at the end of the movie.  She’s not as helpless as many women in westerns, though.

The movie’s most potent symbol burns.

The movie has the typical Boetticher opening shot, of a lone rider emerging from the distance weaving his way through Lone Pine rocks.  There are not a lot of close-ups; mostly the director uses middle-distance shots, with those and other shots using the dramatic scenery.

This has the usual Ranown team:  Boetticher directing, Burt Kennedy writing, Scott starring, Harry Joe Brown producing; cinematography by Charles Lawton, Jr. (not Laughton), and score by the Wisconsin-born composer Heinz Roemheld.  References to the territorial prison at Yuma sound like Santa Cruz (and Rio Bravo) are in Arizona Territory, although they may be in New Mexico or they may be entirely fictional.