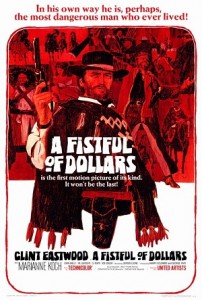 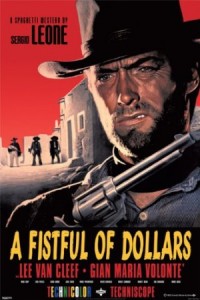 In the opening scene, an American drifter wearing a serape (Clint Eastwood as the Man with No Name, although he’s called Joe by the undertaker) rides a mule into the Mexican town of San Miguel, not far from the U.S. border with Mexico.  He witnesses an incident where a small boy is chased away from Marisol (Marianne Koch), his mother.

The owner of the local saloon explains that the town is dominated by two gangs, the Baxters and the Rojos.  The American thinks he can make some money for himself by playing the two clans against each other, and he’s right initially.  The most formidable of any of them appears to be Ramon Rojo (Gian Maria Volonte), who uses a rifle exclusively and says, “When a man with a .45 meets a man with a Winchester, the man with the pistol is a dead man.”  Marisol is Ramon’s “hostage.”  The Rojos are running scams on every side, killing contingents of Mexican and American soldiers and making it appear that they killed each other. 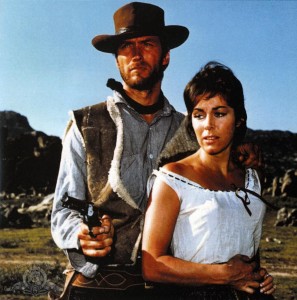 As matters develop, the American helps Marisol escape with her son and husband, enraging Ramon.  The Rojos beat him to a pulp, and he escapes their compound although he can barely move.  As he lies low, he sees the Rojos gun down the Baxters, including the Baxter matriarch.  He recovers while he lies in a local mine, only to find that the Rojos have taken and are torturing his friend the saloon keeper Silvanito. 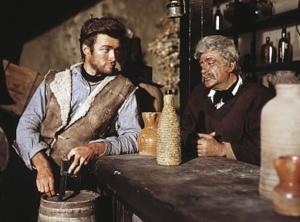 Talking things over with the fatalistic bartender Silvanito.

The American puts on his gun and poncho, and appears before the Rojos out of the cloud of an explosion.  Ramon empties his rifle into the American, who keeps getting back up and coming ahead.  Finally, he reveals that he’s wearing a heavy metal plate under his poncho, deflecting all Ramon’s shots.  He takes out all the Rojo men except Ramon, and puts Ramon’s dictum to the test.  They both reload, and the American wins.

This was filmed in 1964 in Spain, but not released in the U.S. until 1967.  Although it was a remake of Akira Kurosawa’s Yojimbo (1961), it was made without Kurosawa’s permission, and Kurosawa sued Leone.  He later said he made more money from the lawsuit than he did from Yojimbo.  This was the film where American audiences were first exposed to (a) Clint Eastwood as a movie star, (b) a western with music by Ennio Morricone, and (c) spaghetti westerns in general and Sergio Leone in specific.  All those have worked out well.   Leone uses the full width of the panoramic screen, capturing Eastwood facing off against four and five gunmen all in one shot.  Leone and Morricone had known each other since the third grade, but this was the first time they worked together.  The music seems a little loud, perhaps because it’s usually just one whistle or flute at high-ish volume.  Note the four-note descending theme whenever the American makes an appearance or comes to a realization.  It was made with a low budget, and it features many of the hallmarks of Leone’s later work.  It became a cult classic, to be remade again by Walter Hill with Bruce Willis as Last Man Standing (1996).  Even though it was made with a characteristically low budget, it looks much better than most spaghetti westerns—evidence of Leone’s expertise from the start.

Ennio Morricone’s music here is unpleasantly jangly.  Leone wanted a Rio Bravo-type Deguello on the trumpet and Morricone came up with some Mexican-inflected trumpet music, along with his signature whistling, simple wooden flute and chanting.  The soundtracks of these three films were cheaply done and tended to avoid orchestral arrangements of original scores because of the cost that would be involved.

These three Leone films (the Dollar or Man With No Name Trilogy) made Clint Eastwood an international star.  Prior to his work in these films, he was known principally for his work as Rowdy Yates in the television western Rawhide.