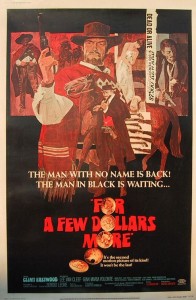 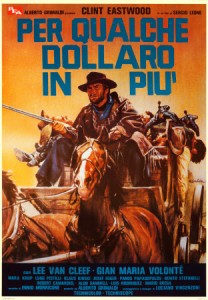 The opening scene is characteristic Leone, although others have used variations (Budd Boetticher at medium distance in Ride Lonesome, for example).  A distant horseman rides toward the camera, while there are sounds indicating that the camera stands in for the eyes of a second person.  After the credits (innovative for 1965), the still-distant rider is blasted out of the saddle, and it is clear that he was shot by the person through whose eyes we watched him approach.

The Man With No Name might not survive the early part of the movie.

This is the second in Leone’s Dollars Trilogy, not really a trilogy except in a general way.  There’s no continuity of story or character from movie to movie.  Clint Eastwood looks the same as he did in the first, complete with the same serape (which was rumored never to have been washed through the filming of the three movies).  This is the movie that made a spaghetti western star of Lee Van Cleef, who’d been playing western bad guys at least since High Noon in 1952.  He looks meaningfully dangerous as Col. Douglas Mortimer in the steely-eyed closeups of which the Italian directors were so fond.  Although the Eastwood character is referred to generally by fans as the Man With No Name, he is called Monco (Manco?) once early in this film.  Gian Maria Volonte also re-appears in this second film, although his character was killed in the first.  He is again the villain, this time called El Indio, leader of a gang of outlaws.

Monco and Col. Douglas Mortimer are bounty hunters, here called “bounty killers.”  We see the prowess of each separately at the start, and then they both start hunting El Indio—Monco for the reward and Mortimer ostensibly for the same reason.  Actually, Mortimer has a more personal motive for hunting El Indio.  When they first meet, they have an impromptu hat-shooting contest, although neither hat thereafter shows the effects of having been shot multiple times.  The two join forces, but we’re never quite sure if they’re really working with or against each other.  Monco gets the gang to accept him so he can see their plans and perhaps influence them.  Eventually the two bounty hunters are found out and are badly beaten.  El Indio is pulling a double-cross on his own men, with the two outsiders in the middle of it.  They both survive the lengthy concluding shootout, and it is revealed that El Indio once killed Mortimer’s young sister and her husband.  Mortimer leaves the entire reward for Monco, and they part ways amicably.

Leone grows visibly as a filmmaker from one movie to the next, or maybe he just has progressively larger budgets to work with in each of his four westerns.  In any event, the production values get better with each movie he makes.  As always, Leone is more interested in mood and myth than in storytelling.  There’s an absurdly high body count in this film, and it moves slowly, with lots of time for closeups on eyes, moody sizing-up of each other by various participants, and low camera angles.  It’s long for a mid-1960s western at about two hours and fifteen minutes, and much of it feels slowly-paced.  Sometimes it seems as though Leone deliberately withholds details of the story so he can surprise the viewer later.  It’s not entirely honest.

As Leone sets up the final shootout between Mortimer and El Indio within a wide circle, you can almost see that he’s dying to play with a three-way shootout in the same kind of setup; he actually does this in his next movie, The Good, the Bad and the Ugly.  As with the first (and third) in the trilogy, this film has an excellent score by Ennio Morricone.  Unlike the first and third in the trilogy, the music does not sound as disproportionately loud.  This is probably the least seen of the trilogy, but it’s still remarkably good—maybe Leone’s best western.  It’s not really a sequel to the first; all three movies are independent stories without repeating characters, although several actors play similar roles in identical garb.

Look for Klaus Kinski as Wild, the hunchbacked gunfighter killed by Mortimer.  He made more than one spaghetti western at this stage of his career.  This was filmed in 1965 in Spain but not released in the U.S. until 1967.