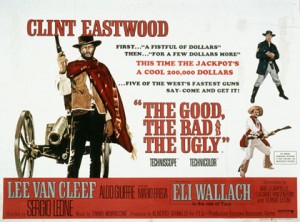 There are different versions of this floating around.  The one I saw most recently said it was the “extended English language version,” about three hours long.  That leaves Sergio Leone to take half an hour introducing the three principal characters, which he does in reverse order:  the ugly (Wallach’s Tuco), the bad (Van Cleef’s Sentenza-Angel Eyes) and then the good (Eastwood’s Blondie).  In particular, the sequence introducing Tuco is very reminiscent of the early part of Once Upon a Time in the West, with anonymous gunmen waiting without dialogue on a dusty and wind-swept western street and the camera frequently cutting to 2/3-face closeups.  The production values are higher than the first two in Leone’s “Dollar” or “Man With No Name” trilogy, and he clearly has a larger budget and more time to spend with his directorial tropes and mannerisms.  As in other Leone films, the dubbing is sometimes a distraction to American viewers.  Aside from the three leads, the cast was almost entirely composed of non-English speakers.

After the introductions, it is clear that Tuco and Blondie are running a scam by which Blondie turns in Tuco for the reward on his head (either $2000 or $3000).  As Tuco is being hung on horseback, Blondie springs him by severing the rope with a well-placed bullet and making the authorities duck for cover.  They move on to another town and repeat the scam.  (There’s no suggestion about what would happen if the hanging were from a gallows, rather than from horseback.)  Tuco wants a larger share than half, and he and Blondie take turns betraying each other. 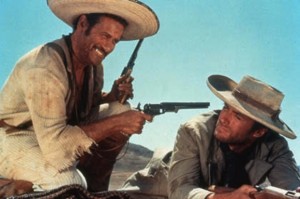 Meanwhile, Angel Eyes is in pursuit of $200,000 in gold.  Tuco and Blondie get wind of the same pot of gold from a dying Confederate soldier who tells Tuco the general location and Blondie the specific spot, so they then need each other to find the gold.  Disguised as Confederates, Tuco and Blondie are captured by Union soldiers and taken to a prison camp, where the sadistic sergeant turns out to be Angel Eyes.  Ultimately the three end up at a cemetery where the loot is buried and have a three-way shootout, in which Angel Eyes is killed by Blondie and Tuco finds out he has no ammunition in his gun. 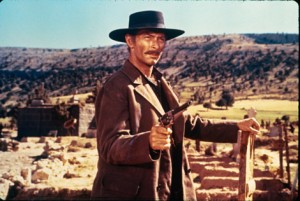 Not much time was spent trying to come up with a story that would hang together well; it’s all about atmosphere, mood and composition.  Theoretically it takes place in the west during the Civil War.  There are references to Glorieta, and that presumably means New Mexico, where the only Civil War battle in the west took place at Glorieta Pass.  It wasn’t as big a clash as depicted in this movie.  There are also troops using trains, and there were no trains in New Mexico until about a decade after the war.  Some say this is Leone’s masterpiece; others would claim that honor for Once Upon a Time in the West.  Still others would say that For a Few Dollars More is a better movie than either.  This is brilliantly directed and beautifully filmed but short on story and cohesiveness considering its length.

The Eastwood and Van Cleef characters look just the same as they did in For a Few Dollars More, but there’s really no continuity with them from movie to movie.  Each film stands alone.  At the end of the movie, Eastwood is wearing the same sheepskin vest and serape that he wore in the other two movies.  In terms of time, this should be the last, but it’s probably the earliest, taking place during the Civil War.  In particular, Van Cleef turned out to be a sort of a good guy in For a Few Dollars More; here, he’s the Bad, and he has little of the gentlemanly quality from the prior movie.  The two movies made him a star of sorts, though, and he had a lucrative career in spaghetti westerns at this late stage.

The music by Ennio Morricone is brilliant, but during the movie it’s kind of intrusive and loud.  The theme is perhaps the most familiar of any of the music from the Leone-Morricone collaboration over the years.  The direction by Sergio Leone was influential, particularly for Eastwood.  Although it’s better done (and has better production values) than most spaghetti westerns, it still has the subgenre’s weaknesses:  the interminable tight close-ups where nothing seems to be happening except sweating, the long shots of desolate landscape and a very small rider or person, the taste for the over-the-top violent and the surreal, the wildly improbable marksmanship.  Eastwood’s character is seldom without a slender cigar in his teeth, but those teeth are very white for a constant smoker.  Between playing Tuco Ramirez in this movie and Calvera in The Magnificent Seven, Eli Wallach made himself the quintessential cinematic Mexican bandit chieftain, but there’s a fair amount of the stereotype in his portrayal, too, emphasized by the frequent lingering close-ups and lots of braying laughter.

There are lots of shots of drawn-out slow movement around almost abstract landscapes.  There is also a brilliantly edited shot where Tuco is about to shoot Eastwood. who has a noose around his neck; cut to cannon shooting, cut back to destroyed building where Tuco has fallen through a floor or two and the now empty noose where Eastwood was.  Filmed in Spain.