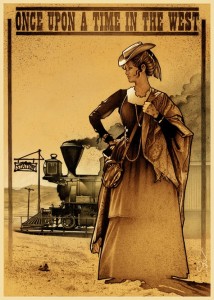 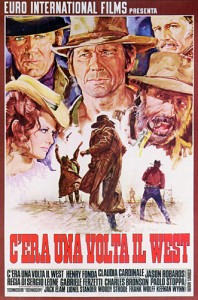 Leone takes his leisurely time getting into the movie.  The lengthy introductory sequence and credits aren’t done until almost half an hour into the film.  It’s interesting to watch as an exercise in filmmaking, and it’s very atmospheric, with little dialogue.

Some think that this spaghetti western may be Leone’s masterpiece and one of the ten greatest westerns ever.  Leone had a bigger budget to work with than with any of his Clint Eastwood trilogy.  Visually, it’s probably his best.  There’s a shot where Harmonica (Charles Bronson as an Eastwood-esque mysterious stranger) looks out a doorway at people building the new town of Sweetwater, and the scene is beautifully composed.  It has a very good cast, with the exception of Cardinale, whose voice is dubbed to get rid of her accent.  Frank (Henry Fonda, in a rare bad-guy role) is a killer-for-hire, now working for a ruthless crippled railroad baron (Gabriele Ferzetti).  He disposes of Brett McBain, owner of a ranch with water that could delay the railroad, not realizing that McBain’s new wife Jill (Cardinale), a New Orleans prostitute, is about to arrive and will have to be dealt with as well.  Harmonica and Cheyenne (Jason Robards) are more or less good guys—Harmonica of mysterious origins and Cheyenne as a local bandit chieftain falsely blamed for the McBain killings.  Obviously all this will get sorted out, but it will take its time.

Henry Fonda as Frank the killer, in dark makeup to emphasize blue eyes.

Even if it’s very well done, this movie still has many of the weaknesses of its subgenre:  Less emphasis on storytelling, more on insistent reaching for emotional reactions through visual images and close-ups; over-the-top violence, although not nearly as bad as in The Wild Bunch, which was in production at the same time; lingering close-ups on faces (frequently from below) and eyes.  It’s a self-conscious epic, slow-moving and seemingly in love with the process of conceiving and making the movie rather than with the story it’s telling.  That deprives it of narrative thrust, but may make it more attractive to auteurs.  The dialogue is extremely sparse, even though the movie is 164 minutes long.  Henry Fonda’s eyes seem abnormally blue, because he’s wearing lots of dark facial makeup; so is Charles Bronson.  The gorgeous cinematography makes some of the best use of Monument Valley since John Ford.  Some of the movie was filmed in Spain.  A buggy ride taken by Cardinale and Paolo Stoppa starts in Spain and ends up in Monument Valley in the U.S.  The music is by Ennio Morricone, including some nice symphonic stretches but notable mostly for effective use of the harmonica, identified with Bronson’s character.  Bernardo Bertolucci (director of Last Tango in Paris in the early 1970s) was one of the writers, along with Dario Argento, who became a one-man Italian horror film industry.

The voices are a bit of a problem, too, for a big-budget film.  The Italian mode of filmmaking involved shooting film without recording any sound, leaving all sound and dialogue to be dubbed in later.  That means there’s usually some form of disconnect with the film, especially when, as with Claudia Cardinale, the sound you hear when she speaks isn’t her own voice.  In the lengthy opening sequence, with the creaking sound of the windmill and Jack Elam’s killer trying fitfully to get a fly off his face without using his hands, Elam has only a few words of dialogue, but it’s jarring that they’re not in his voice.  (His mismatched eyes and rough features have never been so lovingly captured on film, though.)  Bronson, Robards and Fonda, at least, are recognizable by their voices, but sometimes the modulation and ambient sound seem wrong.  That’s true with the harmonica theme, too, when Bronson’s supposed to be playing it and the acoustics are wrong. 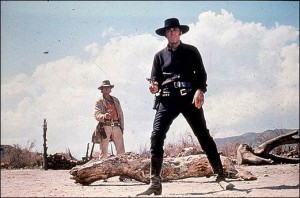 Harmonica (Charles Bronson) gets the drop on Frank (Henry Fonda).

Leone and his collaborators reportedly immersed themselves in watching the great westerns before making this, and there are lots of references from these films.  Both Clint Eastwood and James Coburn are said to have turned down the role of Harmonica.  Robert Ryan was to have played the sheriff (actually played by Keenan Wynn), but had to back out when his role in The Wild Bunch got larger.  John Landis is a stunt double.  This was Leone’s last western, unless you count Duck, You Sucker, a story set during the Mexican revolution for which Leone served as producer and perhaps director.

Debate as you may whether this is one of the ten best, or even one of the 55 greatest westerns.  What cannot be debated is that to have any kind of informed opinion you have to see this and Leone’s Man with No Name Trilogy.  They represent the very best of spaghetti westerns and a new approach that has influenced western movies ever since.