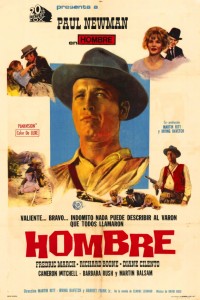 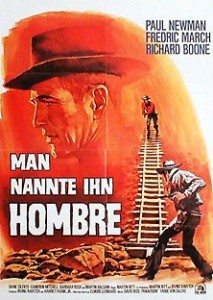 A grim variation on Stagecoach, in which a number of strangers are thrown together on a stagecoach, and social prejudices and real personalities are revealed as the stage is under attack.  In this case, based on a novel by Elmore Leonard, the attack comes from bandits instead of Indians. 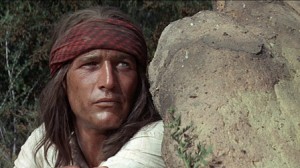 The credit sequence is excellent, with old photographs (apparent or real) of the desert west and Apaches accompanied by music (by David Rose) which is not overtly “western.”  The hombre of the title is a man who looks like an Indian (long hair, Apache headband) but is obviously a white man.  He is John Russell (Paul Newman), abducted by Apaches as a child and raised by them.  When eventually rescued and adopted by a white man, he went back to the Apaches and served among the police on the San Carlos reservation.  As he meets with station manager Henry Mendez (Martin Balsam in dark makeup) in a cantina, two Apaches who came with him are taunted by crass cowboys, and Russell takes decisive and quick action so we see his capabilities early.  His white foster father has died and left him a boarding house run by Jessie (Diane Cilento), a widow of a certain age and experience who is capable at the business and is sharing a bed with the local sheriff, Frank Braden (Cameron Mitchell).  Russell, who has cut his hair and now looks completely white, checks out the house but decides to sell it.  Jessie is therefore out of a job and pushes Braden to marry her.  He, however, feels at a dead end himself at 40 and refuses.

The local stage line is shutting down, but a wealthy woman and her much older husband, Audra and Dr. Alex Favor (Barbara Rush and Fredric March in one of his last roles), buy a wagon and hire Mendez to drive it to Bisbee with whoever else wants to go.  That includes Russell, Jessie, an ex-soldier, young Billy Lee Blake (Peter Lazer) and his discontented new wife Doris (Margaret Blye).  A rough Cicero Grimes (Richard Boone, in his bad guy mode) intimidates the unarmed soldier into giving him his place in the stage.  The question is developing:  What do people owe each other?  Russell is alienated from white people and takes no responsibility or action for others, even though he’s obviously the most competent.  What will it take for him to act, as he did early in the movie for his Indian friends? 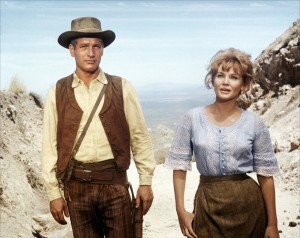 As the stage makes its way on a little-used road past a mine, the cultured Favors object to sharing the stage with the ex-Indian Russell, and he moves to the top with Mendez rather than force the issue.  At a mountain pass, the stage is stopped by bandits who rob it.  They are looking in particular for $12,000 that Dr. Favor has stolen from the San Carlos agency, where he was the Indian agent.  The outlaws include former sheriff Braden, obviously branching out into a new career.  Jessie:  “Frank, what are you doin’?”  Braden:  “Goin’ bad, honey.”  Grimes is in fact the outlaws’ leader.  Grimes forces Audra Favor to go with them; as it becomes obvious her husband will take no action, she accedes with a certain brittle grace.  Grimes, Audra and a Mexican pistolero (Frank Silvera) move off down the trail as Braden and Lamar Dean (David Canary) puncture one of the passengers’ two water bags.  Russell finds his bedroll atop the stage, pulls out his rifle and quickly kills Lamar and Braden and takes off up the mountain with Favor’s stolen money.  The rest of the passengers follow.  His problem is that although he is the only one in the passenger group competent with guns and violence, all of Grimes’ band are.

Russell sets up an ambush with Mendez, which results in the pistolero getting shot in the gut.  As the group makes its way on foot back to an abandoned mine, Favor repeatedly shows himself to be unreliable and Russell expels him in the desert.  Nevertheless, they all make it to the mine.  So do Grimes and the pistolero, who seems in surprisingly good shape for one who is gut shot.  Jessie gives their presence away while trying to help Dr. Favor.  When Grimes comes to parley, Russell shoots him twice.  The Mexican ties Audra Favor out in the sun, where she won’t survive long.  The passengers debate who should help her, although Russell makes it clear that if anyone takes down the money, Grimes and the Mexican will kill both Audra and her rescuer.  The debate that has been building through the movie about what people owe each other comes to a head as Jessie seems to be the only one with enough courage to try to help.

Unexpectedly, Russell takes on that role, leaving his rifle with Billy Lee to take out the Mexican as he comes out and tries to kill Russell.  He walks down the hill, releases Audra (who starts slowly up the hill) and tosses the saddlebags to Grimes.  Grimes finds the bags are stuffed with clothes.  Russell shoots Grimes and the Mexican but is shot twice himself.  Billy Lee was unable to shoot because Audra was in his line of fire.  In the end, the only Christian in the group was the one who was not Christian.  And he was the only one of the passengers to die.  His dead face in the last shot morphs into the blurry face of an Indian child in one of the old photographs.  (The photograph is said to be by C.S. Fly of Jimmy “Santiago” McKinn, captured by Geronimo’s Apaches in 1885 and assimilated into the tribe before Geronimo’s surrender to Crook in 1886.)  There does seem to have been a third bandit at the mine who is never accounted for. 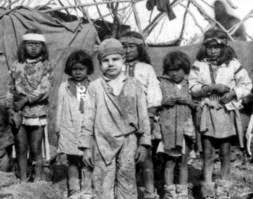 1885:  Eleven-year-old Jimmy “Santiago” McKinn with Apaches upon his recapture.

Blue-eyed Paul Newman is excellent as Russell.  He mostly is impassive, as he is supposed to be.  The way he stands, especially the way he holds his rifle, seem Indian.  The tiny red feather attached to his hat band is a nice touch.  Diane Cilento as Jessie is also excellent, with some of the best lines in a literate, sometimes philosophical, screenplay by Irving Ravetch and Harriet Frank.  Married to each other; the pair often worked with director Ritt and also wrote Hud, The Cowboys, The Spikes Gang and Murphy’s Romance and the story for Ten Wanted Men.   One wonders if Russell and Jessie will somehow end up together.  Fredric March at 70 is smooth and slimy as Favor; he gives Favor more layers and much more interest than the corrupt banker in Stagecoach has.  Barbara Rush is very good as his wife Audra, dealing with her cushy life falling apart.  Richard Boone is superb as the villain Cicero Grimes, although he’s mostly deadly and threatening and not as silky as he sometimes could be. 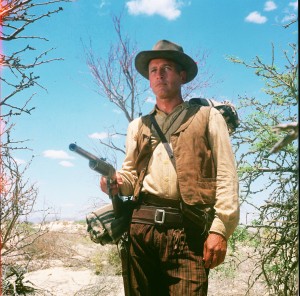 This is often talky for a western, but not too talky (better, for example, than some of Richard Brooks’ work in this respect).  Ultimately, though, Russell is too impenetrable a character and makes a not-entirely-satisfactory Christ figure (one who voluntarily dies for the sins of others).  While he’s the character we most identify with, and the movie sets up the question of how he will deal with the situation, the answer turns out to be that he can’t.  And that’s ultimately a disappointment.  We don’t really know why he does what he does at the end.  In some ways we could deal with that if he survived and was still working things out, but it’s harder if he doesn’t survive and we still don’t quite see the whole picture.  It’s slow developing and the end is not entirely satisfying.  Not that Russell had to beat the bad guys; he did, after all, in a way.  We just need to see a bit more of why to make the end worthwhile.  The end as shown is very downbeat.  Paul Newman, then at the peak of his career, would end up dead in his next western, too:  Butch Cassidy and the Sundance Kid.  This just misses being on the list of great westerns, but it’s very worth watching.

Director Ritt was not particularly known for westerns; more for his work with Newman.  This was the last of six films Ritt and Newman made together.  Ritt directed modern westerns Hud and Murphy’s Romance, though.  The Ravetch-Frank writing team produced a marvelous screenplay, with many memorable lines.  Russell to Grimes, after Grimes has delivered his ultimatum at the mine while Russell stands silently behind Mendez:  “Hey, I got a question.  How are you goin’ to get back down that hill?”  The cinematographer was the legendary James Wong Howe.  Shot in color in several locations in Arizona, including Coronado National Forest, the Helvetia mine in Pima County, and Old Tucson.