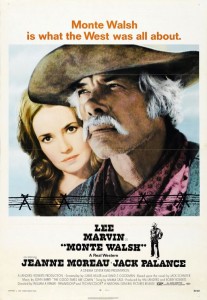 This excellent but slow-moving film may be the best pure end-of-an era western ever made.  The emotional focus is so much on various cowboys, especially the title character and his best friend Chet Rollins, trying to come to terms with the fact that the cowboy way of life is disappearing.

In the initial scene, Walsh (Lee Marvin) and Rollins (Jack Palance) are finishing up their winter spent at a line shack.  On their way in to the town of Harmony, Arizona, they spy a wolf and are about to shoot it for the rancher’s bounty when Walsh launches into a long tale of Big Joe Abernathy, who used to wrestle wolves.  After a few minutes of this, Rollins loses patience, grabs the gun from Walsh and shoots the wolf himself.  Upon arrival in town, they find that the harsh winter (maybe the winter of 1888-89?) has finished off most of the ranches in the area, including the one they work for.  A company known only as “Consolidated” and referred to by the cowboys as “accountants,” has acquired several of the now-defunct ranches and is experimenting with having Cal Brennan, former owner of one spread, manage their ranch holdings.  He hires Walsh and Rollins for the new ranch, the Slash Y.

Mulling over the prospects.

At the Slash Y, we meet the remaining cowboys, getting to know them, getting a feel for their competence at this life, and seeing how each of them deals with the approaching end of their way of life.  The most notable of them is Shorty Austin (Mitchell Ryan), the designated bronc tamer who also fancies himself a good hand with a gun—another skill with diminishing usefulness.  Walsh has a long-term relationship with a local prostitute, Martine Bernard (Jeanne Moreau), who lives in a one-room cabin.  We know their relationship is serious because, in addition to the time taken to show their mutual regard and affection in the limited time they spend together, Walsh never pays her for that time.  Chet is also developing a relationship with Mary Eagle (Allyn Ann McLerie), a widow who owns the local hardware store.  Three of the Slash Y cowboys are let go, and they turn to robbing banks when no cowboy work is available.  Most of the horses are sold, and Shorty is also let go.  Rollins decides to marry Mary Eagle and take up the hardware trade.  As Chet puts it, “Nobody gets to be a cowboy forever.”  Mulling over his dubious future after the wedding, Walsh finds Martine working as a waitress in a bar/restaurant forty miles away.  They make a tentative arrangement to marry, but leave the date indefinite.  Martine has a cough, but says it is nothing.

Meanwhile, the three former Slash Y cowboys are in a bar in Harmony during a rainstorm.  A stranger in a yellow slicker gets the drop on one of them, and Shorty, also at the bar, shoots him.  Peeling off the slicker, they find a marshal’s badge on the stranger, and Shorty goes on the run.  In due course the outlaws find themselves in Rollins’ hardware store, and the more impetuous of them decides to rob it.  When Rollins tries to talk Shorty out of the outlaw life, Shorty lets him have it with a shotgun. 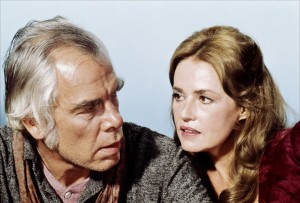 Walsh can’t bring himself to attend the funeral, because then he’d have to acknowledge that Rollins is really dead.  Consolidated is shutting down the ranching operations at the Slash Y.  Walsh takes out after Shorty.  At one stop he hears that Martine is dying (like his way of life, and Chet, and the Slash Y), and he seeks her out.  He’s too late; she’s already dead by the time he arrives.  As he sits by her side, Shorty also arrives in town.  In an extended and unromantic shootout in an abattoir, Walsh is shot but he gets Shorty, too.

The final scene mirrors the movie’s first:  Walsh is on the trail and, on sighting a wolf, dismounts and takes out his rifle.  While he sights to shoot, he starts telling his horse the story of Big Joe Abernathy who used to wrestle wolves.  In the end, he can’t shoot.  The wolf is too much like him—an old-timer with an obsolete occupation whose future is limited.  As he rides away he continues telling his horse the interminable story of Big Joe. 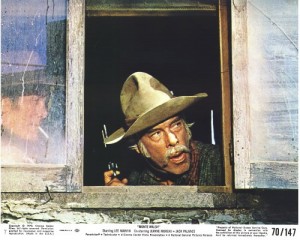 The pacing of the film is elegiac.  The signature line, spoken from Palance to Marvin:  “Nobody gets to be a cowboy forever.”  The leads, Marvin (especially) and Palance, are superb; there’s good chemistry and balance between them.  They have a natural gravitas and substance that makes their troubles seem real and their characters substantial.  Marvin’s hat has almost as much character as he does.  Jeanne Moreau, in one of her rare U.S.-made movies, is quietly appealing as Martine, the doomed prostitute, although she is much younger than Marvin.

Other elements of the film are excellent as well.  It’s based on a novel by Jack Schaefer, who also wrote the story for Shane.  The film is beautifully shot, befitting a movie directed by a well-known cinematographer who only directed four films (William A. Fraker).  The score by John Barry is also very good, even the ironic theme song “The Good Times Are Comin’,” sung well by Cass Elliott.  It was hard to see this film for a long time because, strangely, it was not available on DVD until Nov. 2010.  In 2003, Australian Simon Wincer (Lonesome Dove, Quigley Down Under) directed a made-for-television remake with Tom Selleck in the title role.  It’s pretty good, but the original is better.  For another excellent movie made two years earlier with similar themes, see Will Penny with Charlton Heston.