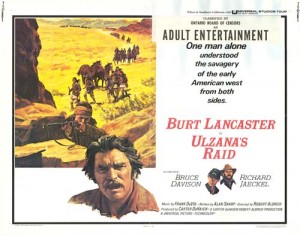 “Adult Entertainment” in the sense that it deals with violence by both sides.

Burt Lancaster’s last significant western (he later appeared in supporting roles as Ned Buntline in Buffalo Bill and the Indians and as Bill Doolin in Cattle Annie and Little Britches), and one of the last good cavalry movies.  Lancaster’s Archie McIntosh the old scout has a certain amount in common with Bob Valdez from Valdez Is Coming the previous year, but in this one he is still scouting and is more tired.  This is also a “teaching the young lieutenant” movie.

The young lieutenant is Lt. Garnett DeBuin (well-played by Bruce Davison), recent West Point graduate and son of a Philadelphia minister.  He is sent out from his fort in Arizona with a patrol in pursuit when Chiricahua Apache leader Ulzana jumps the White Mountain Reservation with several braves.  Going along as advisers and guides are old scout McIntosh and Apache Ke-Ni-Tay, Ulzana’s brother-in-law (Jorge Luke, also excellent).  These three central characters (the old scout, the Indian scout with questionable loyalties and the young lieutenant) could be clichés, but they’re all well-played here. 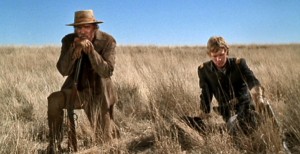 The old scout (Lancaster) and the young lieutenant (Davison).

The lieutenant learns, but it has its costs.  He has a hard time reconciling brutal Apache behavior with what he understands of the Bible, and also has to learn to judge men older and more experienced than he.  Initially Ulzana has the upper hand, raiding a couple of ranches ahead of the troopers.  But McIntosh succeeds in killing Ulzana’s horses during the execution of an Apache stratagem, also killing Ulzana’s young son in the process.  To draw the Apaches out of rough country, McIntosh and DeBuin set up their own stratagem, using a wagon, a small patrol, a deranged woman and McIntosh as bait for Ulzana.  It works, but again at a cost. 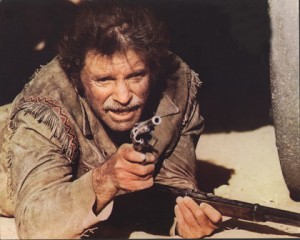 The last shot is a stop motion of the dying McIntosh, like the end of Butch Cassidy and the Sundance Kid, so we don’t actually see his death although we understand that it’s inevitable.  Ke-Ni-Tay gets Ulzana (Joaquin Martinez, with no lines in English and few in Apache) but allows him a certain amount of dignity, in the end establishing his loyalty as a scout.  A downer of an ending to a good western, like Hombre.  And DeBuin learns and will likely be a better officer than most.

Not a powerhouse cast at a time when westerns, and particularly cavalry westerns, were fading from public consciousness; this had a small budget and short shooting schedule.  It depends on the performances of Lancaster and Davison, in particular.  We know that Lancaster is good, but so is the young Davison.  Richard Jaeckel is the quintessential sergeant (as in The Dirty Dozen), and he does not survive Ulzana’s final ambush, either.  Richard Farnsworth, longtime stuntman and still a decade away from meatier roles, is one of the troopers.  Not much seen these days, this is worth watching; it would make a good double feature with Valdez Is Coming. 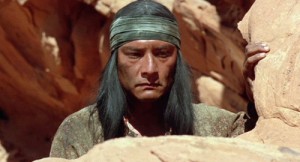 McIntosh’s Apache wife is billed as played by Aimee Eccles (see more of her as Dustin Hoffman’s young Cheyenne wife in Little Big Man), yet she has no lines and is scarcely seen even as a shadow.  Something seems to be missing, perhaps.  Some see a Vietnam allegory in this unsentimental western, although Aldrich didn’t seem to view it that way.  The brutality of the Apaches is not downplayed, nor the occasional similar impulse of the white troopers.  The UK DVD release has been re-edited to remove all instances of horses being trip-wired.  According to the British Board of Film Classification, such a tactic contravenes the 1937 Cinematograph Act which forbids the ill-treatment of any animal in the making of a film (although some stuntmen claim that the method can be performed without harming any horses).

This was decently directed by the experienced Robert Aldrich (Vera Cruz, The Last Sunset), who was said not to be entirely happy with the results.  Apparently there is no definitive cut in existence, but five or six different versions on video/DVD; a wide-screen definitive restoration would be welcome.  It has a good script by Scottish screenwriter Alan Sharp.  In color, shot in Arizona (near Nogales) and Nevada.  Rated R, presumably because of violence and brutality, but today it would likely be PG-13.  Emanuel Levy in 2008 called the film “one of the best Westerns of the 1970s, … also one of the most underestimated pictures of vet director Robert Aldrich, better known for his sci-fi and horror flicks, such as Kiss Me Deadly and What Ever Happened to Baby Jane.”  It was not a success at the box office, however. 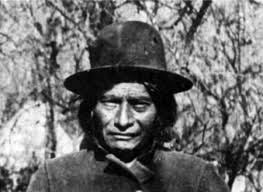 Historically, there actually was an Ulzana.  In 1885 he jumped the reservation for three weeks of raiding with ten warriors.  They may have covered 1200 miles or more of rugged territory during the course of their raid.  The real Ulzana died at Fort Sill, Oklahoma (like Geronimo) in 1909.  If you’re interested, read more about it here:  http://www.desertexposure.com/200606/200606_ulzana.html