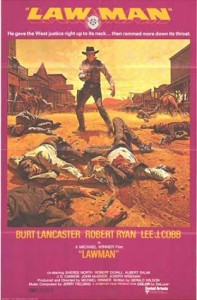 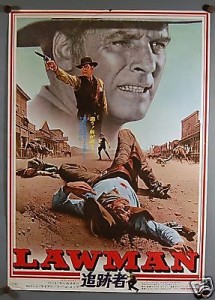 This features an implacable and almost superhuman Lancaster as Jared Maddox, the titular lawman from Bannock, which looks to be in the southwest, despite the name.  (The Bannocks were an Indian tribe that ranged mostly in Idaho.)  The movie was shot in Durango, Mexico.  Cowboys in the employ of Vince Bronson (Lee J. Cobb), returning from a cattle drive, shoot up Bannock and an old man is accidentally killed.  (The suggestion is that his life was less valuable because he was old.)

Months later (in 1887), Maddox comes to their town Sabbath with a list of people he wants to take back to Bannock for trial.  Vince Bronson offers Maddox restitution and a deal to leave them alone, and Maddox refuses to talk about it.  The inference is that Maddox is harder on Bronson and his boys than any Bannock court will be.  While Maddox isn’t wrong in his interpretation of the law, he’s not entirely right, either.  His nature is indicated by an always-buttoned black leather vest he wears.  His character plays a flute alone in his hotel room to indicate a hidden sensitivity in his nature. 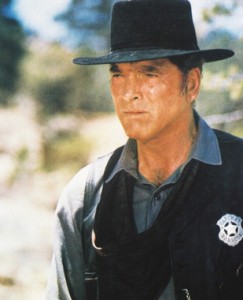 Robert Ryan in one of his last movies is Cotton Ryan, the over-the-hill lawman in Sabbath; he basically works for Bronson.  Much is made about how Cotton has been backed down before in several locations, but he seems to have more balance than Maddox, if not the same strong moral purpose.  This also has an early western role for Robert Duvall (in the same general time frame as True Grit, Joe Kidd) as Adams, a small rancher involved in the drive.  And an early role for Richard Jordan, who also appeared with Lancaster in Valdez Is Coming the same year.

Running through this film is a sense of problems with traditional authority and values, very common in the early 1970s.  There is a good setup of moral quandaries, especially with the Cobb character.  The resolution, to the extent things get resolved, is less convincing.  There are questions on the climactic shootout, but this is better than average.  It was a good year for westerns starring Lancaster, with this, Ulzana’s Raid and Valdez is Coming. 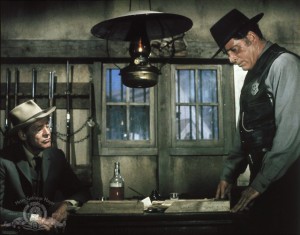 There are attempts to depict moral shades of gray among various characters.  Cobb’s Bronson isn’t that bad a person; he’s not trying to avoid reasonable consequences, and he’d make restitution if Maddox would let him.  Crowe Wheelwright (Jordan) is a young Bronson gunslinger who comes to see some of Maddox’s view.  Ryan can see both Bronson’s and Maddox’s view; he tries to broker a deal between them, which Maddox refuses.  Ryan is the foil to whom Maddox makes the comments most revealing of him. [Note that Ryan uses the word “gunsel,” normally associated with Dashiell Hammett’s work from a later time period, especially The Maltese Falcon.]

The townspeople seem actually to like Bronson (as opposed to being oppressed by him), and some take up arms against Maddox.  Some of the cowboys are as inflexible in their way as Maddox (e.g., Harvey Stenbaugh, played by Albert Salmi), and they’re the first ones to push things to violence; some are cowards or backshooters.   In some ways there may be too many characters.  There’s not enough explanation about Lucas (Joseph Wiseman), the crippled local saloon-bordello owner who has some history with Maddox.  He’s an interesting character, and a counterpoint to Ryan in some ways—some one who has not lost his edge despite reason to have done so. 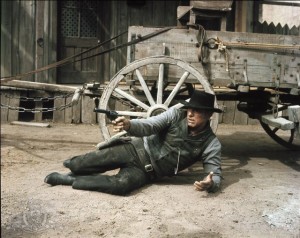 Such moral complexity is unusual in a western.  Maddox is world-weary and sees the fruitlessness of it all:  “It’s always the same.  If you post a man, he has to come into town to prove he’s a man.  Or you kill a man, he’s got a friend or kin — he just has to come against you… and for no reason… no reason that makes any sense.  And it don’t mean a damn to the man already in the ground.  Nobody wins.”  But he does it anyway because it’s his job.  As he goes out for the final shootout, he fatalistically says to Ryan:  “A man gets caught in his own doing.  You can’t change what you are.  And if you try, something always calls you back.”

At the end, there seem to be some cracks in the implacable Maddox façade, but he’s forced into a shootout where there’s no room for hesitation.  It pushes him back into his black-and-white role and outlook.  After dealing with action forced by several others, Maddox shoots down the fleeing J.D. Cannon when he doesn’t really have to.  It certainly de-glamorizes the showdown.  Although Maddox comes out alive, nobody wins.  A rigid adherence to the letter of the law doesn’t make things turn out right.  In some ways, this is a story of obsession, like The Searchers, as well as a variation on the High Noon theme. And it’s said to be a remake of 1955’s Man With the Gun.  (All those are better movies, though.)

The print sometimes seen on the Encore Westerns channel isn’t in good shape, grainy and with washed-out colors.  British director Winner was better known for the Death Wish movies with Charles Bronson, and also made the western Chato’s Land with the same star; he’s said to be overly fond of camera zooms.  Sometimes this one is viewed as a violent relic of the early 1970s overly influenced by spaghetti westerns (unnecessarily violent, for example, as emphasized by the poster); others see it as a gem of moral complexity with excellent performances.  Ryan is said to have preferred this movie to The Wild Bunch.  Not many others would make that claim, but this is worth watching even though there is a residual feeling of director Winner wanting to make a statement more than tell a story that was real to him.