The initial question is whether White Fang can properly be described as a western, since it also seems to belong to other genres:  adventure stories, man vs. nature stories, animal stories, coming-of-age stories, search-for-family stories.  But all of those have shown up as westerns, too.  The settings (Alaska and the Klondike during the gold rush of 1898) are a little unusual.  But they are situated in the North American west and have previously been the settings for obvious westerns:  Anthony Mann’s The Far Country, for example, North to Alaska and various versions of Rex Beach’s novel The Spoilers.  The source novel by Jack London is more firmly in the animal story category, but this has a lot of western feel about it. 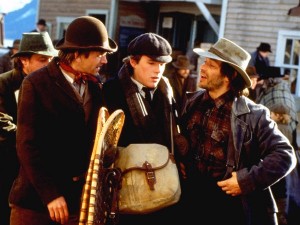 In 1898, young orphan Jack Conroy (Ethan Hawke at 21 but looking and playing younger) arrives in Skagway from San Francisco, at the height of the gold rush in the swirl and noise of the booming port.  He is immediately robbed by Beauty Smith (James Remar) and his two compatriots while looking for Alex Larson, an acquaintance of his late father’s.  Larson (the redoubtable Klaus Maria Brandauer) is heading over Chilkoot Pass for the diggings in the Klondike with his partner Skunker (Seymour Cassel) and doesn’t want to take on another person.  One reason:  his load includes the coffin of Dutch, whom he had promised to bury on his claim.  That adds a macabre note to the journey, in addition to being very unwieldy.  Jack manages to convince Alex and Skunker to let him tag along with their dog team, although Alex thinks he’s bringing too many useless items, like books.

On the trip, Jack learns a lot, partially by getting Dutch’s body dumped into a freezing lake and losing most of their ammunition.  One night the camp is attacked by wolves and Skunker is killed by the pack.  Jack spots a very young whitish wolf, who won’t let him get close. 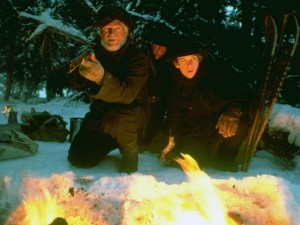 As Alex and Jack arrive in Dawson City, Alex renews his relationship with Belinda Casey (Susan Hogan), who owns a bar there.  He takes Jack out to his father’s claim and agrees to teach Jack to be a miner if Jack will teach him to read.  Meanwhile, the young white wolf is captured by the local Indian tribe, led by Gray Beaver (Pius Savage), who train it as a beast of burden.  On a trip up the river, Jack encounters and remembers the dog.  Gray Beaver says his name is Mia Tuk, or White Fang.  When Jack disturbs a grizzly bear and is attacked, Fang saves him by discouraging the bear.

On a trip to Dawson, Beauty Smith cons Gray Beaver out of the wolf-dog, whom he plans to make into a fighter.  He does this by unsavory methods, and the wolf-dog learns well until he meets a pit bull-type.  As Fang lies in the ring with the pit bull’s jaws claimped on his neck, the mounties break up the fight and Jack takes possession of the desperately injured Fang.  Jack and Alex get him back to Jack’s claim, where Jack nurses him slowly back to health and tries to form a relationship of sorts.  When Jack is buried in a cave-in, Fang digs him out and Alex finds Fang’s paws covered with shiny dust.  Gold! 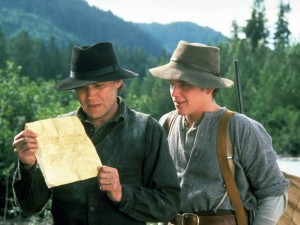 Beauty Smith has already established that he has no qualms about robbery, stealing and dog-fighting.  He proceeds to establish that he is not beyond killing and claim-jumping, either, when he and his two henchmen attack Jack and Alex and set their cabin on fire.  Fang turns the tide when he jumps through a window and attacks the attackers, allowing Jack and Alex to capture them and turn them over to the mounties.

Jack has given half the title to the claim to Alex, and Alex plans to move to San Francisco with Belinda to open a hotel there.  They invite Jack along, but in the end he stays on the claim with Fang, since Fang can’t really be as civilized as San Francisco would demand. 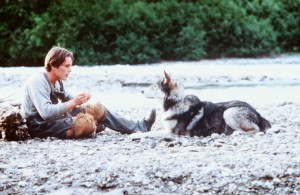 Ethan Hawke is a good actor, and he was very good in this early role.  The real center of the movie, however, is Klaus Maria Brandauer as Alex.  Theoretically, Alex Larson is a supporting role—the capable miner and wilderness man who tutors the city boy.  But he is such a good actor that he provides a solid and interesting center for the film in this supporting role.  In the end, this movie is about relationships—not just the relationship that develops between Jack and Fang, but just as much about the relationship developing between Alex and Jack.  Both are about learning to trust.  Seymour Cassel is good as Skunker in a very limited role, and James Remar is suitably despicable as Beauty Smith.

The movie is made by Disney, and that usually is not a great sign.  But this partakes of Disney’s legacy of nature movies and dog stories (e.g., Old Yeller) in a good way.  There is a little more violence than is usual in Disney movies, but nothing very graphic.  It is well-paced, although significantly more than half the movie passes before Jack and Fang get together.  Although the film has a decent screenplay, much of the story is told visually, without dialogue.  It’s an effective approach here.

This film partakes heavily of the romantic cinematic view of wolves, as in Dances With Wolves and Never Cry Wolf.  It’s a tradition it shares with Rudyard Kipling’s The Jungle Books.  A note at the end of a movie says there’s no documented instance of wolves killing a human, as happened with Skunker in this movie.  They still tend to be pretty scary, especially in packs. 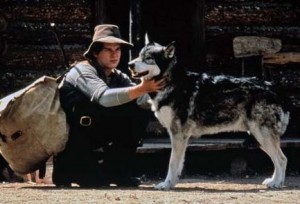 The movie was filmed on location in Alaska, around Haines and Skagway.  There is panoramic scenery elegantly filmed by cinematographer Tony Pierce-Roberts, and a panoramic score by Basil Poledouris, according to the credits.  Actually, Basil Poledouris was hired to write the film’s original score, having worked with director Kleiser on The Blue Lagoon.  Poledouris’ score was rejected in mid-production in favor of one from Hans Zimmer. Unusually, both scores were fully recorded, one in London and the other in California, and pieces written by both Poledouris and Zimmer appear in the finished film.

Director Randal Kleiser is a sort of journeyman commercial-movie director, known principally for Grease and The Blue Lagoon.  One wouldn’t have looked for something as good, as visual and as modest as this from him.  It was successful enough that a sequel was made three years later, with none of the participants from this first film.