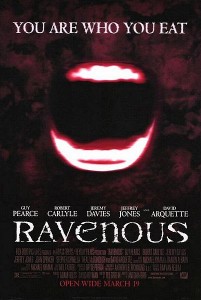 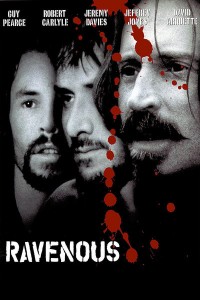 Okay, so this isn’t primarily a western; it’s a horror thriller.  But it takes place in the Sierra Nevadas on the California-Nevada border not too long after the Mexican-American War of the 1840s—roughly the time of the Donner Party.  And it has other echoes of the Donner Party and its cannibalism as well.  It features a vampire-like creature from Indian mythology called a wendigo.  And this strange brew all works.

This movie was obviously not made with a large budget.  Although it has a good cast, that cast is composed almost entirely of character actors.  Guy Pearce, one of the leads, had done LA Confidential two years previously, but had not yet made The Count of Monte Cristo and Memento, among other successes for which he subsequently became well-known.  Robert Carlyle (The Full Monty, Eragon), the other lead, is very effective.  And the movie works surprisingly well for what it is, although it doesn’t use traditional western themes much.  There’s a fair amount of black humor in this, but it’s not a comedy—at least not a conventional comedy.  It has become something of a cult favorite, although it’s clearly not to every taste.

Lt. John Boyd (Pearce) is promoted for a supposed act of heroism in the Mexican War, which was actually the result of cowardice.  He is then sent (exiled) to Fort Spencer, a remote and primitive post in the western Sierras, where he finds an ill-assorted group of seven others:  soldiers led by Col. Hart (Jeffrey Jones), Indians and hangers-on  Eventually the group includes …Colquhoun/Ives (Carlyle), a half-dead traveler who arrives with a story about his small party of emigrants from the east, in which he was forced to resort to cannibalism to survive after it became lost.  But it’s not entirely clear who or what else he is or may be.  As the inhabitants of the small post start disappearing one by one, Boyd is forced to summon some of the courage that he lacked during the late war.  In the words of Roger Ebert, “There are surprises and revelations, and unspeakable things happen to some of the characters, or at least we think they do.” 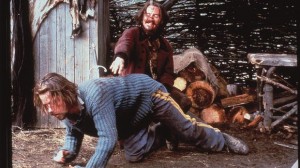 Boyd and Colquhoun/Ives reasoning things out.

Director Antonia Bird was British and is also one of the few female directors of westerns (see also Nancy Kelly’s A Thousand Pieces of Gold and Kelly Reichardt’s Meek’s Cutoff).  She may have had little inherent interest in westerns, and this isn’t very western in anything but time and setting.  She was also a vegetarian, and maybe this film explains why.  (Pearce was also a vegetarian, according to Carlyle’s commentary on the DVD.)  She was great at cultivating the feeling of cold, primitive conditions and isolation that makes this film so atmospheric.  Bird died at 54 in October 2013.

Boyd and Hart hunting …what?

Screenwriter Ted Griffin lists the story of Alferd G. Packer of Colorado, as recounted in a couple of paragraphs of Dashiell Hammett’s novel The Thin Man, as one of his inspirations for Carlyle’s character.  The film was shot in the Czech Republic and Slovakia, with some scenes in Durango, Mexico.  It’s rated R for its considerable gore and violence.  The movie features an unusual soundtrack by Michael Nyman and Damon Albarn, which most find to be quite effective.  The film was not a success at the time of its 1999 release, making only $2 million back on its budget of $12 million.  But it has since gathered a cult following.  It had mixed reviews, but Roger Ebert gave it three out of four stars.  “Ravenous is the kind of movie where you savor the texture of the filmmaking, even when the story strays into shapeless gore.”  So much gore, in fact, that they ran out of fake blood during the climactic fight scene.

For another horror western, see The Burrowers.  For another western featuring a supposed wendigo, see The Lone Ranger (2013).