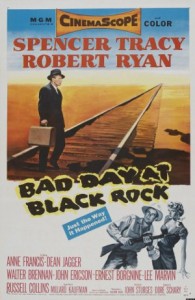 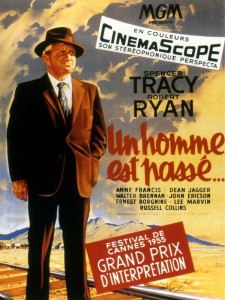 Perhaps the best movie set in the modern west (but see Lone Star and No Country for Old Men), a claustrophobic noir-inflected story that takes place in a tiny town in the Arizona desert. 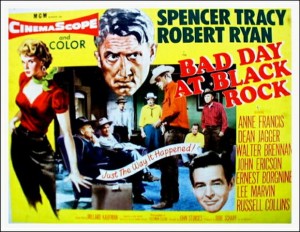 First Train Conductor:  “In a place like this, it could be a lifetime.”

The movie begins with an interesting opening shot of a train crossing the desert.  One-armed John J. Macreedy (Spencer Tracy) gets off the train in Black Rock in 1945 in a dark suit, the first time the train’s actually stopped there in four years.  World War II is just over, but rationing and other strictures persist.  None of the town’s suspicious residents want him there, as he tries to locate a local Japanese farmer, Mr. Komoko. 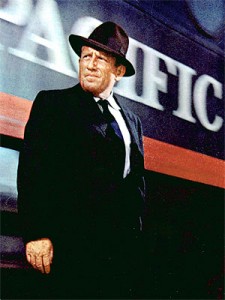 The mysterious stranger arrives in town.

A couple of local cowboy-thugs, Coley Trimble (Ernest Borgnine) and Hector David (Lee Marvin), try to intimidate Macreedy, who bears them with patience and an even temper.  Local rancher-boss Reno Smith (Robert Ryan) suggests that Komoko was sent off to an internment camp shortly after Pearl Harbor, and only three months after he arrived at Black Rock.  Macreedy visits Adobe Flats, where the Komoko farm was; he finds a burned house, a deep well and what may be a grave.

Mr. Hastings, Telegrapher:  “Sure you don’t want some lemonade? It don’t have the muzzle velocity of some other drinks drunk around here, but it’s good for what ails you.”

On the way back, Coley tries to drive him off the road, but Macreedy makes it back to Black Rock.  Coley then tries to pick a fight in a diner, only to find that Macreedy knows judo and takes him out using only one arm.  It becomes clearer that Smith and his people killed Komoko, and they’re probably going to kill Macreedy, too.  Macreedy is a veteran who lost his arm in Italy; Komoko’s son was killed saving his life, and he wants to give the old man his son’s medal. 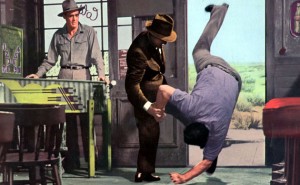 Reno Smith:  “She must have strained every muscle in her head to get so stupid.”

The drunken sheriff Tim Horn (Dean Jagger) and undertaker Doc Velie (Walter Brennan) try ineffectively to help him.  Finally, young local hotel clerk Pete Wirth (a James Dean-esque John Ericson), plagued with guilt over his minor role in Komoko’s death, recruits his sister Liz (Anne Francis) to take Macreedy out of town in her jeep.  She betrays Macreedy to Smith, who kills her anyway.  In a shootout with no gun, Macreedy improvises a Molotov cocktail and sets Smith afire.  Having brought in the state police to Black Rock, he then catches the train out of town.

Second Train Conductor:  “Thought it was something.  First time the Streamliner’s stopped here in four years.”

A superb cast cast, although Tracy seems old for a recent veteran, and some excellent writing in the screenplay by Millard Kaufman.  Tightly directed, the film comes in at 81 minutes.  Tracy was nominated for Best Actor.  This was part of a good run for director Sturges in the 1950s, along with Escape from Fort Bravo, Last Train from Gun Hill and Gunfight at the OK Corral, before he got into his larger-scale action films of the 1960s.  Music was by a young Andre Previn.