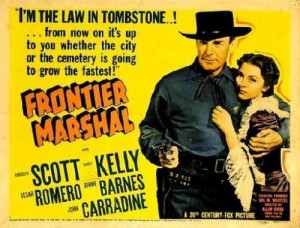 The poster seems to indicate that Wyatt (Randolph Scott) and Sarah (Nancy Gates) may eventually get together, which they never do in the movie.

This film is interesting for two external reasons:  (1) It catches Randolph Scott in the early flush of his career as a lead in westerns (think Last of the Mohicans, Western Union and Virginia City), and he’s good; and (2) it represents an early attempt at the cinematic legend of Wyatt Earp, one that influenced such better-remembered movies as My Darling Clementine.  When this was made, Earp had only been dead for ten years, and there were many still in Hollywood who remembered him.  John Ford claimed to have received Wyatt’s rifle as a gift from the old man before his death.  Stuart Lake’s (more or less) biographical work on Wyatt was fairly recent; the first movie based on his 1931 book Wyatt Earp: Frontier Marshal was in 1934, and this is better. 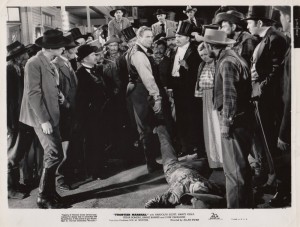 In this version Wyatt shows up in Tombstone alone, without brothers.  Apparently he has a reputation as an Indian scout for Nelson A. Miles (the historical Wyatt did no Indian scouting for the Army, for Nelson Miles or anybody else); no mention is made of Dodge City.  Much as in the beginning of Clementine, Wyatt takes on a drunken miscreant Indian Charlie when nobody else will, impressing local authorities.  Beaten up by the miscreant’s compatriots led by Curley Bill, Wyatt then takes the badge full time, with battle lines drawn.  He meets Doc Halliday [sic] (Cesar Romero), who clearly has a death wish, and they strike up an unlikely friendship, comparing shooting irons at a bar in an unintentionally Freudian scene (much like John Ireland and Montgomery Clift in Red River).  Or maybe we’re just too cynical about such things.

Doc’s former girl friend Sarah Allen (Nancy Gates), a nurse, shows up to remind him of his past life and loves.  He has left all that behind him in order not to saddle her with a dying consumptive.  Wyatt thinks Sarah will be good for Doc, but Doc’s current dance hall companion Jerry (Binnie Barnes) is filled with consternation, not to say hostility. 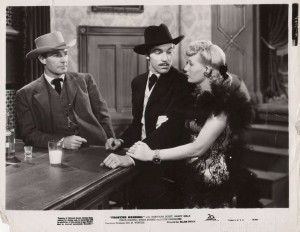 Wyatt and Doc rescue comedian Eddie Foy (played by Eddie Foy, Jr.) when he is kidnapped by a rival saloon, and they find themselves on a stage carrying gold and silver that is about to be robbed.  Jerry has provided Curley Bill with information about the stage and its contents, thinking only that it’ll get Wyatt killed.  However, much of the outlaw gang is shot down in the attack, and Wyatt, a wounded Doc and Foy make it back to Tombstone. 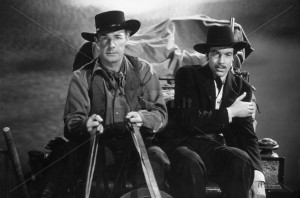 Wyatt and a wounded Doc head back to Tombstone.

In yet another shootout with the remainder of the gang, the Mexican bartender’s son is shot, and the wounded Doc is pressed back into service as a surgeon by Sarah.  He operates in a saloon and is successful in saving young Pablo.  As he steps outside for a breath of air, Doc is gunned down by Curley Bill, who yells to Wyatt that they’ll meet him at the OK Corral.  Wyatt heads there alone, and kills them all.  In the end, Jerry shoots down the fleeing Curley Bill in revenge for Doc.

As we all know by now, Doc didn’t die in Tombstone but in Colorado six years later.  You can almost hear studio gears grinding:  “Yeah, but we have to have somebody on Wyatt’s side die to convey the gravity of the evil he’s facing.  And Doc is so doomed and expendable anyway.  And the situation with the two women is unsalvageable.”  Even John Ford will play it that way in seven years, and the dance hall floozy will die then, too, for good measure. 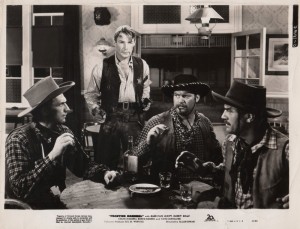 Wyatt takes on the bad guys.

Scott makes a strong, clean-cut Wyatt Earp, who never makes a play for Sarah, although he seems attracted.  Romero is an effective, dark Doc, although one can think of at least five better Docs (Victor Mature, Kirk Douglas, Jason Robards, Dennis Quaid and, perhaps the best, Val Kilmer).  Nancy Gates as Sarah is stronger than Cathy Downs would be seven years later as Clementine in practically the same role.  Director Dwan was an experienced front-line director from the days of silent movies, so this was a bit more reputable than most low-budget B westerns of the 1930s.  In fact, Dwan was said to have directed 171 westerns from 1911 to 1957, and this may have been his best.

Ward Bond is the local Tombstone marshal who won’t go after the miscreant and is replaced by Wyatt.  He had been a bad guy in the 1934 film (now thought to be lost) starring former silent star George O’Brien.  Bond would get promoted to playing Morgan Earp in Clementine, his third Wyatt Earp film in 12 years.  Lon Chaney, Jr. is Pringle, one of Curley Bill’s gang.  The bad guys seem kind of middle-aged and thick around the waist for current notions of western badmen.  But they are certainly rotten.  John Carradine is appropriately serpentine as the owner of a rival saloon and business manager of Curley Bill’s outlaw gang, playing this the same year he did his better-known acting as Hatfield in Stagecoach.  Charles Stevens, who played the drunken Indian Charlie, repeated the role in John Ford‘s remake, My Darling Clementine.  Stevens, who was half Mexican and half Apache, was supposedly the grandson of legendary Apache leader Geronimo. 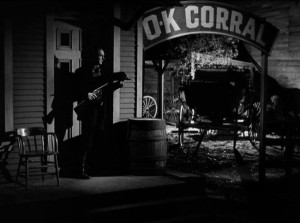 Wyatt goes it alone at the OK Corral, in the dark.

Don’t expect much historical accuracy here, or length, either, at just 71 minutes.  There are no Earp brothers and no Clantons, so it’s a pretty stripped-down version of the story.  If you’re only going to see one early Earp-Holliday movie, it would be Clementine.  But it’s also interesting to compare the two and think about why one is good (for its time) and why one is great (still).  And why the great would not exist without the good.

It was Lake’s 1931 book that first brought the Earp myth to public prominence, although Lake’s version deviated substantially from the actual history.  Walter Noble Burns had also published in 1927 a pro-Wyatt, factually-deficient version of events in Tombstone.  Prior to these books, nobody much was familiar with what has since become the most famous gunfight in western history.  Since the 1934 film is apparently lost, this 1939 version is the earliest available cinematic recounting of the Earp-Tombstone story.  Lake did an updated edition of his book in 1946, on which John Ford’s Clementine was based.