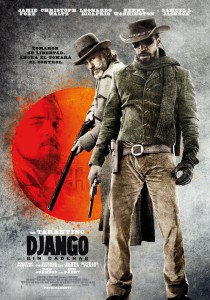 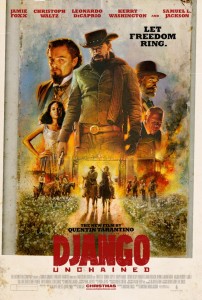 Quentin Tarantino’s ambitious homage to spaghetti westerns was nominated as part of the large field for the Academy Award for Best Picture in 2013; it won for Best Original Screenplay and Christoph Waltz won (again) as Best Supporting Actor.  It’s a long (at 164 minutes) and sometimes dizzying exercise in filmmaking.  Tarantino is overt about finding inspiration in 1966’s Django made by Sergio Corbucci—the theme from that movie plays over this one’s opening credits, and original Django star Franco Nero (among many others) has a cameo.  But the production values are much higher, and the traditional forms of Tarantino self-indulgence are on display.  He self-consciously dances the lines between cliché and homage and between political correctness and outrageous non-correctness in ways no one else does.  He plays with anachronism in language, attitudes and other elements in a very calculated way, and that’s part of the game here.

Set in 1858, the film starts in Texas, where Django (Jamie Foxx) is chained with other slaves purchased at the Greenville, Mississippi, slave markets.  The group is approached by Dr. King Schultz (Christoph Waltz), a dapper and articulate dentist of German origin.  When the slavers refuse to sell Django and threaten him, Schultz shoots them both and reveals that he is also a bounty hunter with anti-slavery feelings.  He proceeds to treat Django well and even trains him in the skills of bounty hunting while he uses Django’s knowledge of three particular miscreants to hunt them down in Mississippi.  [There is a very funny sequence with a pre-KKK group in hoods.]  Django shows immediate aptitude for the profession and joins Dr. Schultz as a partner, with the understanding that they will attempt to find and recover Django’s wife from wherever she has been sold. 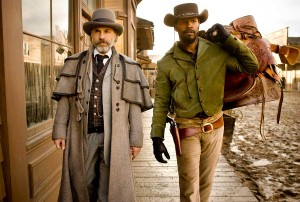 [Spoilers] After a winter spent hunting in the mountains (around Jackson Hole, to judge from the scenery), they head for Mississippi, where they discover that Django’s wife, Broomhilda von Schaft (Kerry Washington, in an apparent reference to 1970s blaxploitation films like Shaft) has been sold to plantation owner Calvin Candie (Leonard DiCaprio).  They come up with an elaborate plan to pose as buyers of Mandingo fighting slaves and purchase Broomhilda on the side.  They are discovered and exposed by Candie’s virulent head of house slaves, Stephen (Samuel L. Jackson).  As matters fall apart and give way to an extensive shoot-out, ultimately Candie and Dr. Schultz (and many others) are killed, and Django is taken prisoner and sold to a mining operator strangely run by Australians. 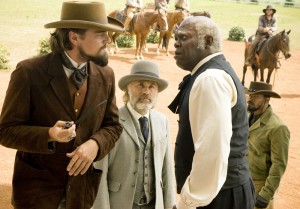 He makes both his escape and a vengeful return to Candieland (Candyland?), armed conventionally and with dynamite from the miners.  He wins and rides away with Broomhilda.

Although the language, clothes and weapons are often anachronistic, the screenplay’s use of language is also mostly engaging, especially when spoken by Dr. Schultz and occasionally by villain DiCaprio.  The best performance is by Vienna-born Waltz, and the part was written with him in mind.  Reportedly Waltz only agreed to take the part on the understanding that the character of Dr. Schultz would have no negative characteristics—other than, say, his profession of killing people.  DiCaprio is excellent as a snaky slave owner and the primary villain, with very strong support from Samuel L. Jackson as head of the Candie house negroes with a strong stake in preserving the status quo. 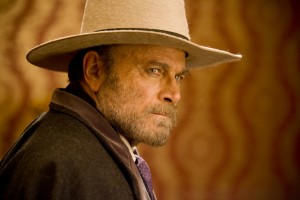 Nero in one of the many cameos.

The name “Django” is said to be a Romany (Gypsy) term meaning “I awake.”  It is well-known among musicians and jazz enthusiasts for having been adopted by Jean-Baptiste Reinhardt (1910-1953), the famous Romany-Belgian-French jazz guitarist known professionally as Django Reinhardt.  It was also extensively used in a string of spaghetti westerns, the first (and best) of which starred Franco Nero. 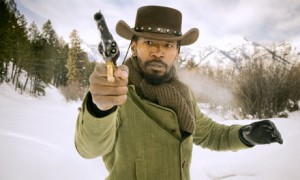 Tarantino and the great Italian composer Ennio Morricone (who got his initial fame from his work on Sergio Leone’s 1960s westerns) have worked together on three previous movies, but with this one Morricone was finding Tarantino’s approach to film music more difficult.  After working on this film, Morricone reportedly said he would probably never again collaborate with Tarantino, since he didn’t like the way the writer/director “places music in his films without coherence,” “never giving enough time.”  Even Jim Croce shows up on the sound track, and it has perhaps the most tense version of Beethoven’s “Fur Elise” on film.

The gunfights are of the sort often seen in spaghetti westerns, in which Clint Eastwood or Lee Van Cleef could take on any number of armed opponents, kill them all and emerge unscathed.  That is, they are not very realistic.  But this is far from the worst violence Tarantino has shown in his films to date. 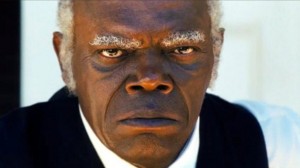 The film is set almost all in the south, but it is obviously a western.  Rated R for graphic violence (people are shot to pieces, with plumes of blood erupting from their bodies; slaves are whipped, branded, tortured and torn to pieces by dogs), brief nudity and liberal use of the n-word, the last of which is presumably historically accurate.  Otherwise, he doesn’t worry much about historical accuracy.  The names are colorful and occasionally outrageous (Calvin Candie, Billy Crash, Leonide Moguy [apparently an homage to 1930s-40s French director Leonide Moguy], Mr. Stonecipher, Butch Pooch, Lara Lee Candie-Fitzwilly, Broomhilda von Schaft, and so on).

Director Tarantino is clearly dazzled by genre film-making and its history.  This results in an unnecessary proliferation of characters, many references to other movies and movie-makers, multiple distractions from telling the movie’s story and ultimately a long movie.  It’s fun, though, and quite watchable.  In fact, you’re unlikely to catch all that’s going on here with just one viewing.

Written by director Tarantino, this was the first western to win the Academy Award for Best Original Screenplay since Butch Cassidy and the Sundance Kid, nearly 45 years earlier, and the first to win an Oscar for acting since Gene Hackman in Unforgiven, twenty years earlier. This film, along with the Coen brothers’ True Grit, repeated the pattern from the early 1990s where two westerns (Dances with Wolves and Unforgiven) were nominated for Best Picture within two years of each other.  In the early 1990s they both won, but not so in the 2010s.