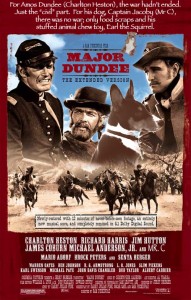 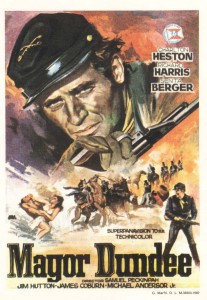 Made between Ride the High Country and The Wild Bunch, this film is a commentary on the question:  What does it mean to be macho?  A study in male hubris, director Sam Peckinpah is giving free rein to certain of his proclivities:  a love for Mexico, drinking and roistering, and for fighting with studios over film budgets which he has wantonly disregarded.  Filmed on location in Durango, Peckinpah initially thought he could escape the scrutiny of studio overseers, but not for long.  He theoretically planned it as an epic, only to end up with a chopped-up and not terribly coherent version of his vision.

The plot doesn’t hang together very well, leading to the suspicion that Peckinpah was making this one up as he went along.  Late in 1864 in the waning days of the Civil War, Major Amos Dundee (Heston) is in disgrace, stationed out west (in Arizona Territory?  Texas?) with custody of uncooperative captured Confederate prisoners (led by Richard Harris as Capt. Benjamin Tyree[n]) who are continually trying to escape.  Dundee has some personal history with the Confederate leader, who was once an officer in the same pre-war regiment as Dundee. 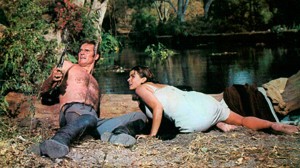 Dundee is attacked–by Apaches, not by Senta Berger’s Austrian doctor.

Dundee takes a group of Union soldiers and unsavory volunteers, augmented by Confederate prisoners who hope to earn their freedom, into Mexico in pursuit of renegade Apaches who have abducted a pair of Hispanic children after killing their parents.  In the course of the movie, he has multiple fights not only with Indians but also with various groups of the French soldiers then occupying Mexico.  He has to deal with racial strife in his own ranks between his Buffalo soldiers and the Confederates.  In a Mexican village, Dundee encounters and develops a relationship with an improbable Austrian female doctor (Senta Berger, apparently just thrown in for a voluptuous romantic interest).  Along the way, he gets the children back, defeats the Apaches, is wounded and has a debauched and impatient recuperation under the noses of the French, deals with further rebellion among the Confederates and has to fight his way back into U.S. territory against vastly superior numbers.  And he loses a lot of men. 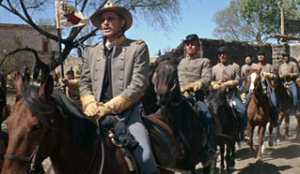 Early in his career, Harris routinely had trouble with other male leads and authority figures while working on movies, and this production was no exception.  It was also troubled in other ways, particularly by Peckinpah’s battles with the studio (in the person of producer Jerry Bresler) over funding and oversight.  Heston apparently believed in the production and Peckinpah enough to contribute his own salary during a financial battle, although Peckinpah was abusive to him and others on occasion.  In fact, Heston convinced the studio not to fire Peckinpah, although by Heston’s account he (Heston) took over the direction in the later part of the film when Peckinpah was incapacitated by various forms of debauchery.  It is said that the studio ended the shooting early, before some planned scenes were filmed. 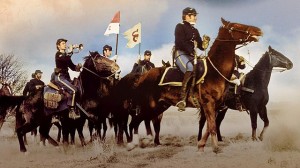 One result of the troubles was that the studio took the final cut away from Peckinpah, and the theatrical release was supposedly truncated.  Erratic editing is more obvious in the second half of the film.  One reason for that is that the script was never more than two-thirds finished.  In 2005 a new cut of the movie was released in a longer 136-minute version and with some different music, apparently an attempt to reconstruct what Peckinpah had in mind before the studio took it away from him.  The twelve added minutes apparently include some drunken recuperation angst by Dundee and rounding out of other characters.  Billed as Peckinpah’s lost masterpiece, this cut may have been lost for 40 years, but it is still not a masterpiece.  It’s worth watching, though.  This movie will probably remain what it has been in legend:  a supposed masterpiece destroyed by a short-sighted studio with an eye only for profits.  Apparently 30 minutes of Peckinpah’s version of the film remain lost.

Harris’ histrionics (on screen and off) notwithstanding, Heston’s performance carries the movie.  Heston was unparalleled for portraying moral rectitude, certainty and strength on screen, even when the script in this case occasionally doesn’t have him doing very well in the rectitude department.  Berger didn’t have much of a career in American movies, and her role here seems thrown in, but she’s all right in it.  James Coburn plays a one-armed Indian scout with alarming eyebrows.  Slim Pickens is an alcoholic muleskinner.  Jim Hutton is a by-the-book artilleryman stuck in the cavalry who nevertheless finds ways to incorporate artillery in the action.  In addition, there are a number of Peckinpah regulars:  L.Q. Jones, Ben Johnson and Warren Oates are among the Confederates, and R.G. Armstrong is a Bible-bashing volunteer smiting the heathen.  Australian actor Michael Pate is again an Apache leader (Sierra Chariba), as he was in Hondo. 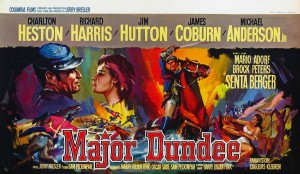 Producer Bresler wouldn’t allow Peckinpah to use Lucien Ballard as his cinematographer, and Sam Leavitt’s work is workmanlike.  Major Dundee bombed at the box office, and Sam Peckinpah became more or less unemployable.  He worked his way back via television (notably with a masterly adaptation of Noon Wine with Jason Robards and Per Oscarsson) and returned four years later with The Wild Bunch.

If you’d like to read more from somebody who has researched the movie and its missing footage more than almost anybody, see Glenn Erickson’s consideration of the DVD.  He takes more the “lost masterpiece” view of the film.   His comments are at http://www.dvdtalk.com/dvdsavant/s1700dund.html