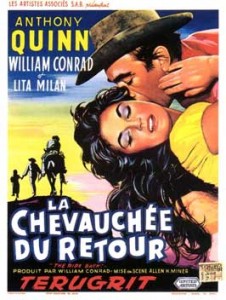 Lead William Conrad doesn’t show up in these posters at all.  The American posters show the title with an exclamation point that doesn’t make much sense:  The Ride Back!  You don’t usually see it that way, though.

This film is an example of why the 1950s could be such a good era for westerns.  They were so strongly in fashion that stories that could have been in other genres got made as westerns.  This is a small story with a small but excellent cast and good writing.  The moving forces behind it seem to have been lead actor and co-producer William Conrad and co-producer Robert Aldrich. 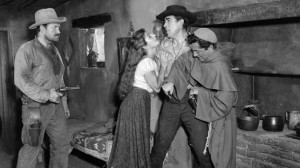 For current audiences, the balding, thickset Conrad seems an unlikely choice for a leading man.  For several years he had played Marshal Matt Dillon on radio in Gunsmoke, and his deep voice was very recognizable.  Here he is Chris Hamish, a deputy sheriff from Scottville (Texas?), who as the movie opens is in Mexico with a warrant for Bob Kallen, a half-Mexican gunman wanted for two shootings in the U.S.  With the help of a priest, Hamish finds Kallen in a small village living with a girl who is related to the priest.  He takes Kallen prisoner, although Kallen is open about the fact that he thinks he’s better with a gun than Hamish and plans to get away.  Hamish agrees with him about the gun skills.  Some villagers show up and ask Kallen if he wants them to kill the man taking him away.  For the moment, he says no.

As they camp the first night, Kallen’s girl catches up with them and tries unsuccessfully to liberate him.  He sends her home.  They see some drunken Apaches and the next day are attacked by them.  With only one horse, they take refuge in a house where they find two dead older women and a dead girl.  They bury them and encounter a twin sister of the dead girl, who witnessed the slaughter and is apparently mute.  Pursued by the Apaches, they take her along. 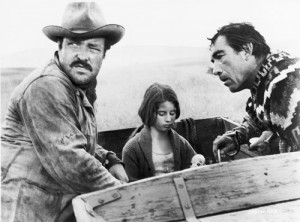 Once back in the U.S., they are about a day from Scottville, with only a lame horse.  Kallen and Hamish have come to know a bit about each other.  Kallen thinks he has been unjustly accused in the shootings and won’t get a fair trial.  He is good with people; the mute girl much prefers him to Hamish.  It comes out that Hamish’s wife can’t have children and hates him, and he considers himself a failure.  That’s why he’s so adamant about bringing Kallen in—the accomplishment of that task will show that he can actually do something.  He could have been jealous of Kallen’s people skills, confidence and ability with a gun, but it seems that he comes to admire Kallen.

Less than a day from Scottville, the Apaches attack them again.  Hamish is wounded badly, and he gives Kallen both the key to his manacles and the gun before he collapses.  Kallen polishes off the remaining Apaches.  He takes advantage of Hamish’s weakened condition to take the horse and head back for Mexico.  But as Hamish lies delirious on the ground with the girl helpless to do anything for him, Kallen returns, helps Hamish onto the horse and the three of them move on toward Scottville.

Pondering whether they can get back at all.

This is a psychological western, a character study of both Kallen and Hamish, but especially of Hamish.  The movie is short, at less than 90 minutes, and it’s not long on plot.  But it is effective.  The shifting relationship of a captor and outlaw captive moving toward mutual respect might remind you of the original 3:10 to Yuma, made the same year.

Shot in black and white at a time when the transition was being made to color, the cinematography is effective, with lots of low shots that include clouded skies.  It didn’t have a large budget, and it didn’t make a lot of money, but it is good.  It got made because Conrad also played a role as producer.  The dialogue is fairly spare, and both Conrad and Quinn are very good.  This was a period when Quinn played several villains in westerns (Last Train from Gun Hill, Warlock), and he is excellent in all of them.  Kallen is written more flamboyantly than Hamish, and Kallen shows some of the outlaw’s attractiveness.  The credited director, Allen Miner, was ill during a significant amount of the shooting (ten days), and during that time the second unit director Oscar Rudolph took over, although he is not credited as director.