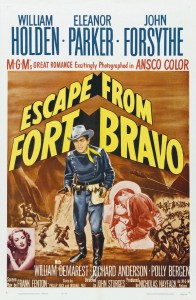 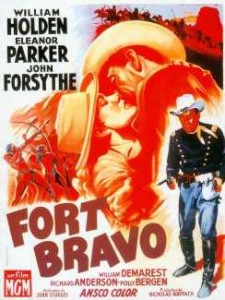 One of the best of the early John Sturges westerns.  Filmed in Death Valley and New Mexico, Sturges is obviously playing visually with the stunning desert landscapes throughout the movie.  The movie makes good use of color, if you’re watching a clear print.  Apparently there are problems with some DVDs.  Cinematography is by Robert Surtees.

Fort Bravo is supposedly located in Arizona Territory during the Civil War (1863), when the war is not yet decided.  Confederate soldiers are held there under loose conditions; they may even outnumber their captors.  The fort is surrounded by hostile Mescalero Apaches in league with Cochise’s Chiricauhuas.  The main character is the implacable Captain Roper, convincingly played by William Holden.  He’s the one who deals with Confederates who escape, chasing them down in hostile territory and bringing them back.  John Forsyth is the leader of the Confederates, including a small group that is planning an escape.  (Echoes of the future Sturges WWII movie The Great Escape, to be made a decade later.) 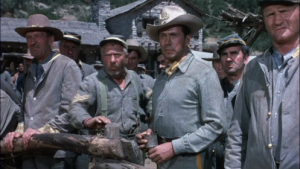 The sullen Confederate captives are led by John Forsyth (center).

Eleanor Parker shows up as Carla Forester, an elegant Texas friend of the post commandant’s daughter (Polly Bergen) who’s getting married, and also the film’s principal romantic interest.  In fact, she’s there to set up the Confederate escape.  While doing so, she plays the hardened Roper, who falls in love with her.  She is more a Howard Hawksian female than a John Ford one—one who comes close to the edges of propriety in her relationship with Roper while she’s playing him.  The escape takes place, and Carla joins the escapees.  Roper is ordered to go after them, and the Apaches are after them all.  Roper does capture them, and they start to fight their way back to the fort.  The fight back is desperate; this is one of those cavalry movies (like, for example, Fort Apache) that depicts the Indians as good tacticians. 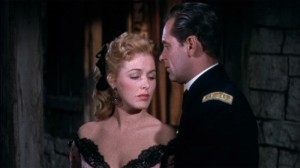 Escape from Fort Bravo belongs to that small category of  cavalry westerns, along with Two Flags West and Major Dundee, that has Yankees and Rebs fighting side by side against the Indians.  The supporting cast is good, especially crusty William Demarest as the oldest Confederate.  Richard Anderson is decent as Lt. Beecher, a young Union junior officer.  John Forsyth is elusive as the Confederate commander, who has his own romantic interest in Carla. 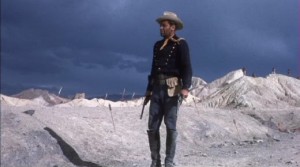 The film is not without weaknesses:  Eleanor Parker seems way too glitzy in dress and makeup for (a) the 19th century and especially for (b) a frontier post.   She also doesn’t seem very Texan.  The ending is abrupt and not entirely convincing, with the Apaches taking care of some of the difficult decisions.  It would be good to see at least a little of how Roper and Carla work things out instead of just watching them ride into the sunset with Carla’s betrayal unresolved.  Maybe a little more backstory on Carla would be interesting.  But this is a good, watchable western.

William Holden is the center of the movie and his flinty personality and determination make it work.  The film came out the same year that Holden won the Best Actor Oscar for his performance in Billy Wilder’s Stalag 17.  He’s equally good here.  Eleanor Parker didn’t show up in westerns much.  If you’d care for another look at her, this time in a colonial-period western, she plays an aw-shucks-type backwoods female who is after mountain man Robert Taylor in Many Rivers to Cross (1955).